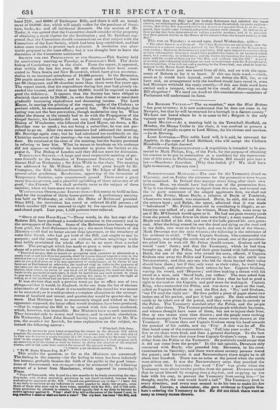 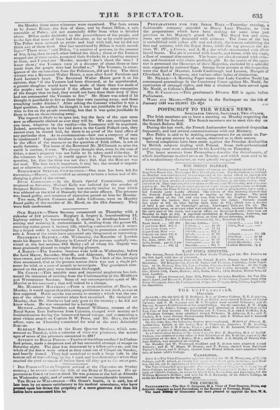 Page 10, 2 July 1831 — NEWTOWNEARRY MASSACRE.—The case for the Yeomanry closed on Thursday, and
Close

NEWTOWNEARRY MASSACRE.—The case for the Yeomanry closed on Thursday, and

on Friday the witnesses for the prosecution were begun to be examined. In Ireland they manage every thing tiller their own fashion. Here, we should have had the case of the prosecution first. Why it was thought necessary to depart from this rule, and to send out the ex parte statement of the alleged aggressors first, we shall not guess. On Friday, Moses Doyle, a relation of Doyle of Tombrick, whose cows were seized, was exa,mined. Doyle, he said, did not think the seizure legal ; and Ralph, the agent, admitted that it was made " beforehand." Mr. Feltus concurred in considering it illegal ; an ar- bitration was talked of ; and the witness, Moses Doyle, went away to see if Mr. M'Clintock would agree to it. He had not gone twenty yards from the pound, when five or six shots were fired ; a man named James Doyle was killed at his side, and one of the balls pierced his own great- coat. After the firing ceased, he saw the dead and dying on the road and in the fields, two were on the bank, and one in the bed of time Slaney. Mark Devereux was the next witness ; the following is the substance of his evidence in chief. "When Captain Graham, who commanded the Yeomanry, was taking the cattle out of the pound, one of the parishion- ers asked him to wait till Mr. Feltus should return. Graham said he would 'cant' them ; and that the Yeomanry, which he had then brought up, and the Police, had their guns loaded with ball-cartridge. Doyle, the son of the man who owned the cows, offered, if Captain Graham sent away the Police and Yeomanry, to drive the cattle into Newtownharry, and that any one who bid for them beyond their value should have them; but if they only went to their value, he would buy them himself, and afterwards have redress by law. Captain Graham, waving his sword, said 'Disperse ;' and then making a thrust with his sword at a man, said Stand back, you ruffian.' The man asked him how he dared make a dart of Isis sword at him ; that he had as good a right to the road as the Captain, and paid more for making it. Captain King, who commanded the Police, and was down a pace on the road,

called on Captains Graham to read the Riot Act. said Graham, 'but read the right act.' He then pulled a piece of paper about two

inches out of his pocket, and put it back again. He then ordered the cattle to be taken out of the pound, and they were given in custody to the Police. The Yeomanry marched after the Police, and the people rushed after them. The Yeomen pushed the people with their bayonets, and witness thought hurt some of them, but not to injure their lives. One or two stones were then thrown ; and the people were rushing through amongst the Yeomanry when more stones were thrown at the Yeomanry. Witness then saw Captain Graham stoop his bead towards the pummel of his saddle, and say 'Fire.' A shot was let off. He thee heard some of the commanders say, 'Fall into your ranks.' Then five or six shots were fired, and then a general discharge. To the best of his belief, the first shot came from Captain Graham's corps. It came either from the Police or the Yeomanry. He positively could swear that it did not come from the people." In this last opinion, Devereux only concurred with Doyle, who preceded him. Devereux, in his cross- examination on Saturday, said there were about seventy persons round the pound ; and between it and Newtownbarry there might be in all about four hundred. There was no noise at the pound when the cattle were driven out. It was the Newtownbarry corps that punched the people with their bayonets ; the word "Fire" was given when the Yeomanry were about twelve perches from the pound. Devereux stated that be saved himself by creeping into a dog-hut, and stopping up the • hole with his coat, to prevent the Yeomanry from seeing him—" he thought, maybe, the coat would hould a ball." The Yeomanry fired in every direction, and every man seemed -to do his best to make his fire effectual. Curran, a slate-maker, also gave evidence to Captain Gra- ham's ordering the Yeomanry to fire, lie did not think there were-so.. many as twenty atones thrown. On Monday three more witnesses were examined. The facts sworn to by James Berne, the first of these, and by James Dillon, a sub- constable of Police, c:id not essentially differ from what is detailed above. Dillon spoke decidedly to the peaceableness of the people, and to the fact that none of them had fire-arms, as far as he could perceive. The Police were ordered to prime and load with ball, but he did not think any of them fired. One fact Mentioned by Dillon is worth record- ing—" There were." said Dillon, "a number of persons, to the amount of five, lying close to each other behind the ditch ; three of the Yeomen stepped out of their ranks, presented their firelocks in a slanting manner at them, and I cried out Murder, murder ! don't shoot the men ! I know them ;' the Yeomen were at a distance of about three or four yards from the people they had levelled at." The Yeomen, in conse- quence of the exidamation from the Policeman, did not fire. The third witness was a Reverend Walter Hoare, a man after Lord Farnham and Lord Lorton's heart. The Reverend Walter Hoare gave it as his opinion, that "if the Yeomen had been disarmed, as he apprehended, a greater slaughter would have been made of them than was made of the people ; and he believed if the officers had the same conception of the danger that he had, they would not have done their duty if they had not commanded the Yeomen to fire." Mr. Hoare was asked if he thought it justifiable to fire at those that were running away, and those crouching under ditches ? After asking the Coroner whether it was a legal question, he replied, he thought it was not justifiable for the Yeo- men to fire on the people crouching, but that it was quite justifiable fo them to fire on those running away.

The inquest is likely to be spun out, but the facts of the case seem Mow as effectually elicited as ever they will be. We can anticipate but one issue, whatever be the verdict—the Yeomanry will be acquitted. Indeed, according to the law laid down in the Castle Pollard case, they cannot even be denied bail, for there is no proof of the fatal effect of any particular shot. As to condemnation—how can a company of men be condemned ? Captain Graham is safe in his intentions. What may be the effect of the massacre on the question of Irish tithes, is not so easily foreseen. The haste of the Reverend Mr. M'Clintock to seize the cattle is curious, if true. We always thought that, even in the case of tithes, a mans property was not liable to be taken until tithe-day. If the witnesses be correct, it would appear it is. There seems to be no question, 1st, that the tithe was not due ; 2nd, that the Riot-act was not read. The first fact is important, it may be; the second is import- ant or otherwise, according to circumstances.

ROSCOMMON SPECIAL COMMISSION.— One man has been left for execution,—Hussey, coavicted of an attempt to burn a house and of dis- charging a pistol at the owner. ENNIs ComNessiosi.—At the Ennis Special Commission, which reopened on Saturday, Michael Kelly was indicted for the murder of Sergeant Robinson. The evidence was exactly similar to that which was adduced on the trial of Donnelly for the same offence. The prisoner was found guilty, and sentence of execution passed on him for Monday. Two men, Patrick Connors and John Cullinane, were on Monday found guilty of the murder of Mr. Blood, on the 21st January. They were both condemned.