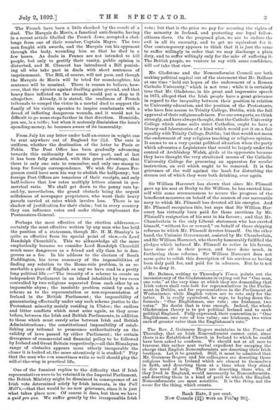 The French have been a little shocked by the result

of a duel. The Marquis de Mores, a fanatical anti-Semite, having in a recent article libelled the French Jews, accepted a chal- lenge from one of their number, Captain Mayer. The two men fought with swords, and the Marquis ran his opponent through the body, wounding him so that he died in a few hours. As duels in France are not intended to kill people, but only to gratify their vanity, public opinion is disturbed, and M. Cluseret has introduced a Bill punish- ing all who take part in duels with short sentences of imprisonment. The Bill, of course, will not pass, and though the Marquis de Mores will be tried for manslaughter, his sentence will be nominal. There is reason to believe, how- ever, that the opinion against duelling gains ground, and that heavy fines inflicted on the seconds would put a stop to it altogether. Already, it is stated, the readiness of French -tribunals to compel the victor in a mortal duel to support the _family of his victim operates to inspire combatants with a dread of inflicting dangerous wounds, and it would not be difficult to go some steps further in that direction. Homicide, you see, is a trifle ; but when it seriously diminishes the hero's spending-money, he becomes aware of its immorality.