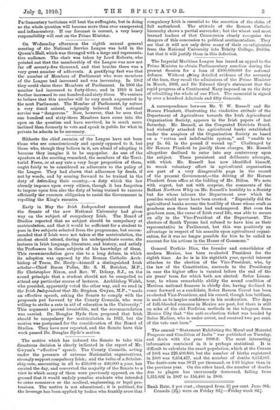 General Porfirio Diaz, the founder and consolidator of modern Mexico,

has been re-elected President for the eighth time. As he is in his eightieth year, special interest attaches to the election of the Vice-President, who, by the law of the Constitution, succeeds to the Presidency in case the higher office is vacated before the end of the six years' term for which both are elected. Senor Liman- tour, to whose remarkable ability the sound condition of Mexican national finances is chiefly due, having declined to come forward as a candidate, Senor Ramon Corral has been re-elected Vice-President, and his record, though less brilliant, is such as to inspire confidence in his moderation. The days of full-blooded romance in Mexico are past, but there is still an echo of the old Porfirian methods in the telegram from Mexico City that " the anti-re-election ticket was headed by Seiior Madero, who is under arrest, and received two per cent. of the vote cast here."