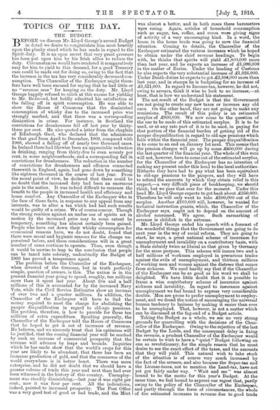 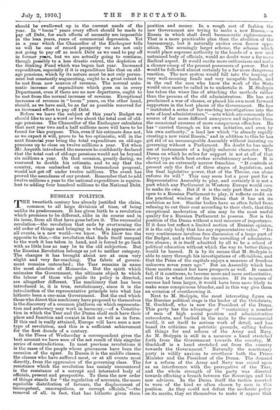 THE BUDGET. BEFORE we discuss Mr. Lloyd George's second Budget in detail we desire to congratulate him most heartily upon the plucky stand which he has made in regard to the Spirit-duty. It is an open secret that very great pressure has been put upon him by his Irish allies to reduce the duty. Circumstances would have rendered it comparatively easy for him to yield to this demand, for a good Treasury case could be made out for doing so, owing to the fact that the increase in the tax has very considerably decreased con- sumption. The Chancellor of the Exchequer might there- fore have well been excused for saying that he had little or no " revenue case " for keeping on the duty. Mr. Lloyd George happily refused to catch at this excuse for yielding to Mr. Redmond, but boldly admitted his satisfaction at the falling off in spirit consumption. He was able to show the House of Commons that the diminished consumption of whisky due to the increased price was strongly marked, and that there was a corresponding diminution in crime. For instance, in Scotland the convictions for drunkenness fell off last year by thirty- three per cent. He also quoted a letter from the chaplain of Edinburgh Gaol, who declared that the admissions to that gaol from April to December, 1909, compared with 1908, showed a falling off of nearly two thousand cases. In Ireland there had likewise been an appreciable reduction in drinking, ranging from thirty-five to even seventy per cent. in some neighbourhoods, and a corresponding fall in convictions for drunkenness. The reduction in the number of convictions for drunkenness and offences connected therewith in England, again, had gone down by something like eighteen thousand in the course of last year. From the moral point of view, he declared that there could be no doubt that the increased duty had been an enormous gain to the nation. It was indeed difficult to measure the benefit to the people in increased health and efficiency and home comfort. Any Chancellor of the Exchequer who in the face of these facts, in response to any appeal from any interests, was to alter a tax which had had such results would be guilty of a crime. We of course concur. Though the strong reaction against an undue use of spirits set in motion by the increased price may to some extent be temporary, something has almost certainly been gained. People who have cut down their whisky consumption for economical reasons have, we do not doubt, found that there were moral and hygienic reasons for the change un- perceived before, and these considerations will in a great number of cases continue to operate. Thus, even though it -would be unwise to leap to the conclusion that people can be taxed into sobriety, undoubtedly the Budget of 1909 has proved a temperance agent. The problem before the Chancellor of the Exchequer, when divested of the tiresome, but in truth perfectly simple, question of arrears, is this. The nation is in the present financial year going to spend, roughly, ten millions more than it spent last year. About five and a half millions of this is accounted for by the increased Navy Vote, while the Civil Service Estimates show an increase of over two and a quarter millions. In addition, the Chancellor of the Exchequer will have to find the money required to meet the charge for abolishing the pauper disqualification in regard to old-age pensions. His problem, therefore, is how to provide for these ten millions of extra expenditure. Speaking generally, the Chancellor of the Exchequer told the House of Commons that he hoped to get it out of increases of revenue. He believes, and we sincerely trust that his optimism will be justified, that the coming financial year will be marked by such an increase of commercial prosperity that the revenue will advance by leaps and bounds. Inquiries which he has made show that the world's crops for this year are likely to be abundant, that there has been an immense production of gold, and that the commerce of the world everywhere is in better heart. There was more enterprise, and he did not doubt that we should have a greater volume of trade this year and next than had ever been witnessed in the history of this country. Unemploy- ment was steadily diminishing,—last year it was eight per cent., now it was four per cent. All the indications, indeed, pointed to increased prosperity. The Post Office was a very good test of good or bad trade, and the Mint was almost a better, and in both cases there barometers wire rising. Again, articles of household consumption such as sugar, tea, coffee, and cocoa were giving signs of activity of a very encouraging kind. In a word, the boom in the home trade was going to save the financial situation. Coming to details, the Chancellor of the Exchequer estimated the various increases which he hoped to obtain under the chief revenue headings. To begin with, he thinks that spirits will yield £1,800,000 more than last year, and he expects an increase of £1,088,000 in the matter of Excise. Under the heading of Customs he also expects the very substantial increase of £1,826,000. Under Death-duties he expects to get £2,504,000 more than last year, and in stamps he is budgeting for an increase of £1,521,000. In regard to Income-tax, however, he did not, owing to arrears, think it wise to look to an increase,—at least, that is how we understand his statement.

The net result of the Budget is that the Government are not going to create any new taxes or increase any old ones. On the other hand, they are not going to make any remissions. The result of this policy is an estimated surplus of £800,000. We now come to the question of the use to be made of this estimated surplus. It is to be used, or at any rate part of it is to be used, in paying for that portion of the financial burden of getting rid of the pauper disqualification in regard to old-age pensions which falls within the financial year. The pauper disqualification is to come to an end on January 1st next. This means that the pension charges will go up by some X450,000 during the last quarter of the financial year. The whole of this sum will not, however, have to come out of the estimated surplus, for the Chancellor of the Exchequer has no intention of making any present under this head to the local authorities. Hitherto they have had to pay what has been equivalent to old-age pensions to the paupers, and they will have to refund the amounts by which they obtain relief in this respect,—a very difficult piece of bookkeeping, we should think, but we pass that over for the moment. Under this head Mr. Lloyd George expects to get back about £850,000. Therefore he will only want to take £100,000 out of the surplus. Another £100,000 will, however, be wanted for technical instruction grants, which, the Chancellor of the Exchequer says, ought not to depend on the amount of alcohol consumed. We agree. Such earmarking of revenue is childish in the extreme.

Mr. Lloyd George ended his speech with a forecast of the wonderful things that the Government are going to do next year in the way of social reform. They are going to start, he says, a great national scheme of insurance for unemployment and invalidity on a contributory basis, with a State subsidy twice as liberal as that given by Germany for the same purpose. This scheme will insure two and a half millions of workmen employed in precarious trades against the evils of unemployment, and thirteen millions of working men and women against the distress that oomes from sickness. We need hardly say that if the Chancellor of the Exchequer can be as good as his word we shall be delighted. We have little doubt that it is possible to frame a, wise contributory scheme of insurance against sickness and invalidity. In regard to insurance against unemployment we feel bound to express very considerable doubts. Men are prone to prefer unemployment to employ- ment, and we dread the notion of encouraging the universal human tendency to laziness by making it easier than ever to be unemployed. That, however, is not a matter which can be discussed at the fag-end of a Budget article.

Taking the Budget as a whole, we see no very strong grounds for quarrelling with the decisions of the Chan- cellor of the Exchequer. Owing to the rejection of the last Budget by the Lords, and the consequent delay in fixing the revenue, a prudent Chancellor of the Exchequer would be certain to wish to have a " quiet " Budget following on one so revolutionary, for the simple reason that he must desire to see the exact effect of the taxes, and the amounts that they will yield. This natural wish to take stock of the situation is of course very much increased by the fact of the arrears, and also because the Super-tax and the License-taxes, not to mention the Land-tax, have not yet got fairly under way. " Wait and see " was almost bound to be the motto for this year's Budget. At the same time, we feel bound to express our regret that, partly owing to the policy of the Chancellor of the Exchequer, and partly through the force of circumstances, the Whole of the estimated increases in revenue due to good. trade. should be swallowed up in the current needs of the year. In "boom" years every effort should be made to pay off Debt, for such efforts of necessity are impossible in the lean years, years of commercial depression. Yet in a year which the Chancellor of the Exchequer tells us will be one of record prosperity we are not only not going to pay off as much Debt as we used to pay off in former years, but we are actually going to continue, though possibly to a less drastic extent, the depletion of the Sinking Fund which was begun last year. Increased expenditure, especially if it is expenditure like that on old- .age pensions, which by its nature must be not only perma- nent but constantly augmenting, ought to a great extent to be met from new sources of revenue. The normal auto- matic increase of expenditure which goes on in every Department, even if there are no new departures, ought to be met from the normal increase of revenue. Exceptional increases of revenue in " boom" years, on the other hand, should, as we have said, be as far as possible reserved for an increased effort to pay off Debt. Before we leave the subject of this year's Budget we should like to say a word or two about the total cost of old- age pensions. The Chancellor of the Exchequer calculates that next year two and a half millions more will have to be found for this purpose. This, even if his estimate does not, as we expect it will, prove to be too optimistic, will in the next financial year bring the total expenditure on old-age pensions up to close on twelve millions a year. Yet when Mr. Asquith introduced the measure he confidently declared that the total cost of old-age pensions would not be beyond six millions a year. On that occasion, greatly daring, we ventured to double his estimate, and to say that the country, once embarked on this tremendous proposal, would not get off under twelve millions. The event has proved the soundness of our protest. Remember that to add twelve millions a year to the national expenditure is equiva- lent to adding four hundred millions to the National Debt.