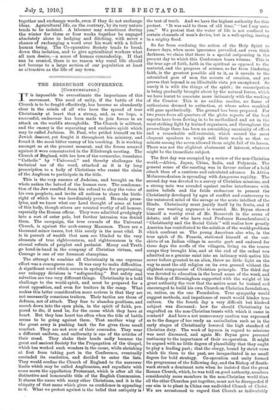 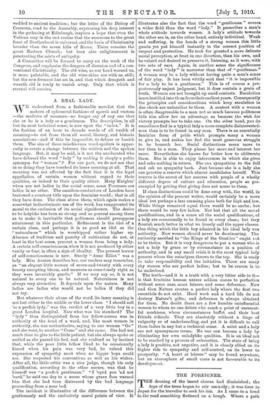 Page 17, 2 July 1910 — I T is impossible to overestimate the importance of this movement.
Close

I T is impossible to overestimate the importance of this movement.

The need of unity, if the battle of the Church is to be fought effectively, has become so abundantly clear in the minds of all who have the spread of true Christianity at heart that a strong, and, as we hope, a successful, endeavour has been made to join forces in an attack on the world's strongholds. The Church is militant, and the enemy is the separating and exclusive spirit which may be called Judaism. St. Paul, who prided himself on his Jewish descent, yet fought it throughout his ministry, and found it the most bitter enemy of his teaching. It is working amongst us at the present moment, and the forces arrayed against it were concentrated in the Edinburgh meeting. The Church of England, with her love of the vernacular, translates " Catholic " by "Universal," and thereby challenges the technical use of the word, attached as it is by long prescription to a body of Christians who resent the claim of the Anglican to participate in the title.

This is the very essence of Judaism, and brought on the -whole nation the hatred of the human race. The condemna- tion of the Jew resulted from his refusal to obey the voice of his own prophets, and invite all nations to share the birth- right of which he was inordinately proud. He made prose- lytes, and we know what our Lord thought of some at least of this body, though others are counted worthy of all honour, especially the Roman officer. They were admitted grudgingly into a sort of outer pale, but further intrusion was denied them. The campaign, the true crusade of the Universal Church, is against the arch-enemy Mammon. There are a thousand minor issues, but this surely is the most vital. It is in pursuit of wealth that men are blinded to the very elements of true righteousness, and righteousness is the eternal refrain of prophet and psalmist. Mercy and Truth go hand-in-hand in the company of Christian virtues, and Courage is one of our foremost champions.

The attempt to combine all Christianity in one supreme effort was a courageous one. It was easy to make difficulties. A significant word which occurs in apologies for perpetuating our unhappy divisions is " safeguarding." But safety and salvation are two very different things. Christianity is a bold challenge to the world-spirit, and must be prepared for a stout opposition, and even for traitors in the camp. What makes this latter consideration more serious is that they are not necessarily conscious traitors. Their tactics are those of defence, not of attack. They fear to abandon positions, and march down into the open plain, in the spirit of faith, pre- pared to die, if need be, for the cause which they have at heart. But they lose heart too often when the tide of battle seems to be going against them. That another wing of the great army is pushing back the foe gives them small comfort. They are not sure of their comrades. They wear a different uniform, and uniformity is one of the articles of their creed. They shake their heads sadly because the great and ancient Society for the Propagation of the Gospel, which has worked such wonders in the cause, while shrinking at first from taking part in the Conference, eventually rescinded its resolution, and decided to enter the lists. They would confine the Church of England to the narrower limits which may be called Anglicanism, and repudiate with some scorn the appellation Protestant, which is after all the distinctive and honourable title of the English Communion. It shares the name with many other Christians, and it is the ubiquity of that name which gives us confidence in appealing to it. What we protest against is the belief that antiquity is the test of truth. And we have the highest authority for this protest. " It was said to them of old time," " but I say unto you." We protest that the water of life is not confined to certain channels of man's device, but is a well-spring, issuing in a mighty flood.

So far from confining the action of the Holy Spirit to former days, when more ignorance prevailed, and even thick darkness, we claim that there is a special outpouring in the present day to which this Conference bears witness. This is the true age of faith, faith in the spiritual as opposed to the material, and the progress of science, so far from hindering faith, is the greatest possible aid to it, as it unveils to the astonished gaze of men the secrets of creation, and yet proves that beyond is an illimitable vista yet unexplored. So surely it is with the things of the spirit ; its emancipation is being gradually brought about by the natural forces, which we have learnt to associate more intimately with the working of the Creator. This is no sudden resolve, no flame of enthusiasm doomed to extinction, at whose ashes mankind will gaze apathetically. The ground has been prepared. For two years from all quarters of the globe reports of the best experts have been flowing in to be methodised and set in the most striking light by trained organisers, and throughout the proceedings there has been an astonishing unanimity of effort and a remarkable self-restraint, which caused the most eloquent speakers to weigh well their words so that no minute among the seven allowed them might fail of its lesson. There was not the slightest abatement of interest, whatever might be the immediate subject.

The first day was occupied by a review of the non-Christian world,—Africa, Japan, China, India, and Polynesia. The general sense of the meeting was in favour rather of a bold attack than of a cautious and calculated advance. In Africa Mohammedanism is spreading with dangerous rapidity. The second day was devoted to a survey of Christian missions, and a strong note was sounded against undue interference with native beliefs and the futile endeavour to present the Christianity developed by ages of conflict and controversy to the untutored mind of the savage or the acute intellect of the Hindu. Christianity must justify itself by its fruits, and if they are wanting argument is wasted. Mr. Bryan showed himself a worthy rival of Mr. Roosevelt in the arena of debate, and all who have read Professor Rauschenbusch's "Christianity and the Social Crisis " will realise how greatly America has contributed to the solution of the world-problems which confront us. The young American also who, in the true spirit of St. Francis, stationed himself at the out- skirts of an Indian village in ascetic garb and endured for three days the scoffs of the villagers, living on the coarse scraps they brought him, and at the end of the ordeal was admitted as a genuine saint into an intimacy with native life never before granted to an alien, threw no little light on the way to meet the old religion on its own ground without the slightest compromise of Christian principle. The third day was devoted to education in the broad sense of the word, and the Bishop of Birmingham supported with the weight of his great authority the view that the native must be trained and encouraged to build his own Church on Christian foundations, or, rather, on the one Foundation. True sympathy would suggest methods, and impatience of result would hinder true culture. On the fourth day a very difficult but kindred subject was discussed : how far should Christianity be engrafted on the non-Christian tenets with which it came in contact P And here a not unnecessary caution was expressed as to the danger of too ready an assimilation such as in the early stages of Christianity lowered the high standard of Christian duty. The work of laymen in regard to missions was next discussed, and again Mr. Bryan gave personal testimony to the importance of their co-operation. It might be argued with no little degree of plausibility that they ought to play a leading part ; that the clergy, bound by strict vows which tie them to the past, are incapacitated in no small degree for bold strategy. Co-operation and unity formed the programme of the following day, and the Bishop of South- wark struck a dominant note when he insisted that the great Roman Church, which, he was told on good authority, numbers considerably more members in the non-Christian world than all the other Churches put together, must not be disregarded if our aim is to plant in China one undivided Church of Christ. We are accustomed to regard that Church as indissolubly wedded to ancient tradition ; but the letter of the Bishop of Cremona, read to the Assembly, expressing his deep interest in the gathering at Edinburgh, inspires a hope that even the Vatican may in the end realise that the summons to the great feast of Brotherhood is universal, and the basis of Christianity broader than the seven hills of Rome. There remains the great Eastern Church ; bat here also enlightenment is penetrating the mists of antiquity.

A Committee will be formed to carry on the work of the Congress, and emphasise the dangers of disunion and of a con- ventional Christianity. The old wine, as our Lord warned us, is more palatable, and the old wine-skins are with us still; but the new ferment has set in, and that which decayeth and waxeth old is ready to vanish away. Only that which is eternal will survive.