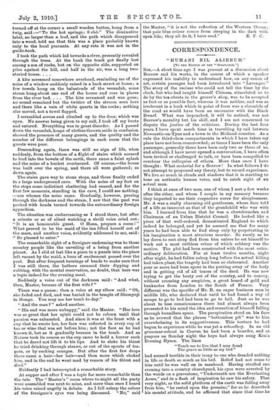 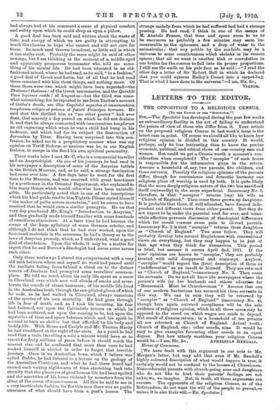 [To THE EDITOR OF THE " SPECTATOR."] Sin,—A short time ago I was present at a discussion about Borrow and his works, in the course of which a speaker expressed his inability to understand how, on any canon of art, certain passages had been introduced into " Lavengro." The story of the recluse who could not tell the time by the clock, but who had taught himself Chinese, stimulated so to do by the tea-chests in the grocer's shop, was to be accepted as fact or as possible fact, whereas it was neither, and was as irrelevant in a book which in point of form was a chronicle of the road as would have been an encounter with the Black Dwarf. What was impeached, it will be noticed, was not Borrow's morality but his skill, and I am not concerned io dispute the justice of the criticism. During the last four years I have spent much time in travelling by rail between Newcastle-on-Tyne and a town in the Midland counties. As a rule the third-class compartments in which I have taken my place have not been overcrowded ; at times I have been the only passenger, generally there have been only two or three of us, and although I have never opened a conversation, I have often been invited or challenged to talk, or have been compelled to overhear the colloquies of others. More than once I have thought : What material for a Borrow ! In what follows I do not attempt to propound any theory, but to record experience. We live so much in clouds and shadows that it is startling to hear an authentic human voice, and to catch sight of an actual man.

I think at once of two men, one of whom I met a few weeks after the other, and whom I couple in my memory because they imparted to me their respective cures for sleeplessness. Mr. A was a really charming old gentleman, whose face told. of a life as innocent as that of the grandchild who was with him. I learned from him that he was a churchwarden and Chairman of an Urban District Council. He looked like a piece of that well-ordered, domesticated England to which indeed he belonged, and yet he assured me that for many years he had been able to find sleep only by perpetrating in his imagination a most atrocious murder. So surely as he lay down to rest sleep fled from him unless he set himself to work out a most ruthless crime of which robbery was the motive. The plot had been constructed with the most extra- ordinary deliberation. For at least twelve months, night after night, he had fallen asleep long before the actual killing had taken place, the tragedy had been so elaborated. Another year or more had been spent in the putting away of the body and in getting rid of all traces of the deed. He was now trying to get the booty out of the country, and to convey, without arousing any suspicion, a great hoard of gold and banknotes from London to the South of France. Very different was the specific of Mr. B, an eager business man in middle life, who declared that until be had found a way of escape to go to bed had been to go to bell. Just as he was about to lose consciousness there bad almost always been presented to his mind the idea and sensation of himself falling through boundless space. The perspiration stood on his face as he avowed that the phrase "bottomless pit" was to him overwhelming in its suggestiveness. This torture he had begun to experience while he was yet a schoolboy. In an old grammar-school in Craven he had been a boarder, and at prayers on Sunday night the boys had always sung Ken's Evening Hymn. The lines

"Teach me to live that I may dread

The grave as little as my bed" had seemed terrible in their irony to one who dreaded nothing in life or death so much as his bed. Relief had not come to him until he was well on in manhood. Having strolled one evening into a country churchyard, his eyes were arrested by the words on a gravestone, "Underneath are the Everlasting Arms," and in a flash of inspiration he saw his safety. That very night, as the solid platform of the earth was falling away from him, "he rested upon the promise," for so he described his mental attitude, and he affirmed that since that time he had always had at his command a sense of physical comfort and safety upon which he could sleep as upon a pillow.

A good deal has been said and written about the waste of time and energy of which we are guilty in attempting to teach the classics to boys who cannot and will not care for them. So much seed thrown broadcast, so little soil in which it can strike root. Probably the same might be said of other sowings, but I am thinking at the moment of a middle-aged and apparently prosperous ironmaster who told me some- thing of his mental life. He had been educated in an old- fashioned school, where he had read, as he said, "in a fashion," a good deal of Greek and Latin, but of all that he had read there remained with him three things, and nothing more. Of these there were two which might have been expected—the Thalassa! thalassa ! of the Greek mercenaries, and the Quintal. Vare legiones redde ! of Augustus—but the third was some- what astonishing, for he repeated to me from Tacking's account of Galba's death, nec tilos Capitolii aspectv,s et imininentiwm templorum religio et priores et futuri Principes terruere. He said that this thrilled him as "no other poetry" had ever done, that scarcely a day passed on which he did not declaim it, and that he always connected with imminentium templorum an old engraving which when he was a child had bung in his bedroom, and which had for its subject the destruction of Jerusalem by Titus. Having been surprised into this con- fession, he asked me in a propitiatory manner what was my opinion on Tariff Reform, so anxious was he, in our English fashion, to merge in the flood his own spiritual personality.

Three weeks later I met Mr. C, who is a commercial traveller and an Assyriologist. On one of his journeys he had read in his newspaper a description of some of the Assyrian tablets in the British Museum, and, as he said, a strange fascination had come over him. A few days later he went for the first time to the Museum, and was received with great heartiness by a gentleman in the Oriental Department, who explained to him many things which would otherwise have been unintelli- gible. He particularly noted that in one of the inscriptions which his kind guide read to him Tiglath-Pileser styled himself " the maker of paths across mountains," and he seems to have resolved that he would earn a similar panegyric. He on that very day purchased Mr. King's " Introduction to Assyrian," and then gradually made himself familiar with some hundreds of cuneiform characters. At a later time he had become the owner of the huge syllabary of some German scholar, and although I do not think that he had ever worked upon the first-band materials in the museums, he had a theory as to the laws of Assyrian prosody, which, as I understand, want a good deal of elucidation. Upon the whole, it may be a matter for regret that he and Borrow's Sinologist had never come across each other.

Only three weeks ago I shared the compartment with a very old man between whom and myself no word had passed until the sunlight falling from behind a cloud on to the distant towers of Durham had prompted some travellers' common- place. He told me much about his early life spent on a moor in Cleveland over which now roll clouds of smoke and rever- berate the sounds of steam-hammers ; of his middle life lived in the Australian bush, through the sun-glinted gloom of which he rode, as he had walked in Cleveland, always conscious of the spectre of his own mortality. He had gone through life in fear of death, and, as I took his meaning, his fear had fastened, not upon the Calvinistic terrors on which he had been nurtured, not upon the ceasing to be, but upon the mysteries of time and space between which and his spirit he seemed to have no shelter but that afforded by his body and bodily life. With Heine and Carlyle and Mr. Thomas Hardy he had shuddered at the sight of the stars. As a youth he had read that a train travelling a mile a minute would have so to travel for forty millions of years before it should reach the nearest star, and he confessed that more than once he had soaked himself in alcohol in order to forget that horrible journey. Once in an Australian town, which I believe was called Dubbo, he had listened to a lecture on the geology of the Australian Continent, and what he had there heard had caused such waking nightmares of time stretching back into eternity that the pleasures of good human life had been spoiled and the sanctities of his home violated by monsters from the slime of the ocean of consciousness. All this he said to me in a very inarticulate fashion, for for this man there was no poetic utterance of what should have been a poet's horror. The strange malady from which he had suffered bad had a strange passing. He had read, I think in one of the essays of M. Anatole France, that time and space seem to us to be enormous as probably a. few minutes may seem im- measurable to the ephemera and a drop of water to the animalculae ; that any pebble by the roadside may be a universe to some consciousness which shrinks in its remote spaces; that all we want is another kink or convolution in our brains for the cosmos to fall into its proper proportions. I still see the smile on his pale face as he said :—" I read the other day a letter of Sir Robert Ball in which he declared that you could squeeze Halley's Comet into a carpet-bag. That is what I have done to the universe."—I am, Sir, &e., VIATOR.