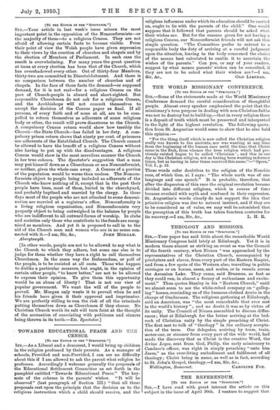 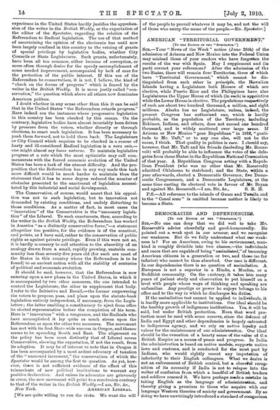 [TO THE EDITOR OP THE "SPECTATOR."1

SIR,—I have read with great interest the article on this subject in the issue of April 30th. I venture to suggest that

experience in the United States hardly justifies the apprehen- sion of the writer in the British Weekly, or the expectation of the editor of the Spectator, regarding the relation of the Referendum to Radical legislation. The use of that method of ascertaining the opinion of the electorate has until now been largely confined in this country to the vetoing of grants of special privilege by legislative bodies, whether City Councils or State Legislatures. Such grants, unfortunately, have been all too common, either because of corruption, or more often through desire for the speedy accomplishment of some needed improvement, accompanied by lack of care for the protection of the public interest. If this use of the Referendum be conservatism, it is not, I believe, the kind of "check on the forces of progress" which is feared by the writer in the British Weekly. It is more justly called "con- servation," the question which above all others now dominates American politics.

I doubt whether in any sense other than this it can be said that in the United States " the Referendum retards progress." Rare indeed are the instances where progressive legislation in this country has been checked by this means. On the contrary, legislative bodies have almost invariably been driven by pressure from the voters, whether directly or through elections, to enact such legislation. It has been necessary to push them forward, not to hold them back. The Legislature or City Council which requires to be checked in a course of hasty and ill-considered Radical legislation is a rara one might almost say /uses naturae. To maintain legislative progress at a rate which the most optimistic may call com- mensurate with the forced economic evolution of the United States has been a task of the utmost difficulty. And the pro- position that the Referendum has in any way made this task more difficult would be much harder to maintain than the statement that it has to some degree reduced the number of obstacles presented to the enactment of legislation necessi- tated by this industrial and social development.

The Conservative, of course, would assert that his opposi- tion was not to such legislation, but to innovation not demanded by existing conditions, and unduly disturbing to those conditions. As a matter of fact, in most cases the " innovation" of the Conservative is the "necessary legisla- tion" of the Liberal. To such enactments, then, according to the writer in the British Weekly, the Referendum has worked in America "as a distinctly conservative force,"—a statement altogether too positive, for the evidence is of the scantiest, and points, as I have said, rather to the conservation of public rights as against private privilege. Even if this were not so, it is hardly necessary to call attention to the absurdity of an analogy drawn from a small, rapidly growing, unstable com- munity less than seventy-five years old (for such are most of the States in this country where the Referendum is to be found) to an ancient nation with all the stability of centuries of political and economic evolution.

It should be said, however, that the Referendum is now entering upon a new phase in the United States, in which it is accompanied by two other measures, the one intended to control the Legislature, the other to supplement that body. I refer to the Initiative and Recall,—the former empowering the voters to propose, pass, and place upon the statute-book legislation entirely independent, if necessary, from the Legis- lature; the latter enabling a constituency to eject from office its elected representative before the completion of his term. Here is " innovation" with a vengeance, and the Radicals who have accomplished it lay quite as much stress upon the Referendum as upon the other two measures. The movement has met with its first State-wide success in Oregon, and thence seems to be spreading South and East. The alignment on the policy has been most distinctly that of Liberal versus Conservative, showing the expectation, if not the result, from its adoption. It may be of interest to note that in Oregon it has been accompanied by a most ardent advocacy of taxation of the " unearned increment," the conservatism of which the Spectator would be among the first to question. As yet, how- ever, there is not sufficient evidence of the effect of this triumvirate of new political institutions to warrant any positive declaration. And unless its advocates are grievously in error, the new movement will point to a conclusion contrary to that of the writer in the British Weekly.—I am, Sir, &c.,

[We are quite willing to run the risks. We want the will

of the people to prevail whatever it may be, and not the will of those who usurp the name of the people.—En. Spectator.]