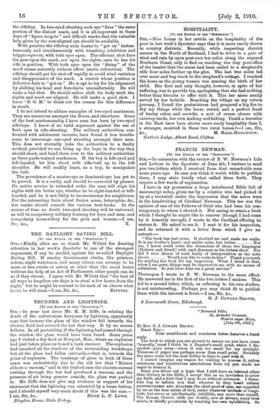 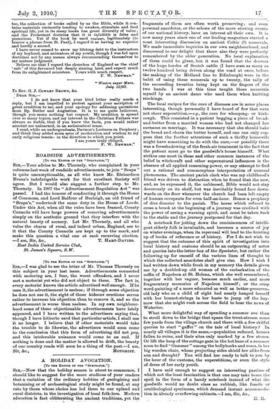 [To TEE EDITOR OF Tam "SPECTATOR"]

Sin,—In connexion with the review of F. W. Newman's Life and Letters in the Spectator of June 4th, I venture to send you two letters which I received from that remarkable man some years ago. In case you think it worth while to publish them, I may state briefly what called them forth. They require a few words of explanation.

I have in my possession a large interleaved Bible full of manuscript notes, given me by a relative who had picked it up at a bookstall under the impression that the notes were in the handwriting of Cardinal Newman. This too was the opinion of one of the Fellows of Oriel who had been his con- temporary, to whom I showed it. Not caring to retain a book which I thought he might like to recover (though I had come

by it honestly enough), I wrote to the Cardinal offering to restore it. He asked to see it. I sent it for his inspection, and he returned it with a letter from which I give an extract:— " The book has just come. It startled me and made me smile.

It is my brother's hand—not unlike mine, but better For me, I never could write the characters of those two languages [Hebrew and Greek] with such firmness as his letters show. Nor did I ever dream of such laxity of interpretation as the note shows Would you like to write to him ? Thank you much for sending the book for my inspection. What I dread is that, when I am gone, things may be imputed to me with no means of refutation. So you have done me a great service."

Thereupon I wrote to F. W. Newman to the same effect. He answered me in the first of the two letters I enclose. This

led to a second letter, which, as referring to his own studies, is not uninteresting. Perhaps you may think fit to publish them while the interest is fresh.—I am, Sir, &c., G. J. COWLEY-BROWN.

Your considerate and courteous letter deserves a frank

The book to which you are pleased to assure me you have come `honestly,' must I think be a Bagster's small print, which I dis- carded—gave away—when it was too small for my eyesight. Thinness of paper was perhaps worse than small print. Probably the same cause led the next holder in time to part with it. I cannot imagine any reason for xl:01i/1g to possess it, unless erroneous and mischievous annotations from my pen made me eager to destroy it.

Since you throw out a hope that I still have an interest other than literary in the Bible, I accept this as an invitation to avow my faith, and a hint that I may do so without intrusion. I there- fore beg to inform you that whoever in deep heart esteem RIGHTRODRABRS AND Borartlas the chief good of man, are regarded by me as the true saints of God, under whatever latitude or longi- tude, but never as intellectually infallible, any more than myself. The Roman Church with (no doubt), now as always, many true saints, is chiefly pernicious by teaching her own ivorallilnlity. So

too, the collection of books called by us the Bible, while it con- tains materials eminently tending to awaken, stimulate and feed spiritual life, yet in its many books has great diversity of value ; and the Protestant doctrine that it is infallible is false and p'ernicious. Yet if the book be used yopipton, legitimately (to borrow a phrase from St. Paul), I regard it as having no superior and hardly a second. I have never ceased to avow my lifelong debt to the instructors of my boyhood, and animators of my youth, though I was fed upon doctrines not by any means always recommending themselves to thy mature judgment.

Believe me that I regard the churches. of England as the chief 'salt'' of this favoured but deeply sinning land, and expect much from its enlightened ministers. Yours with much respect, F. W. Newm.AN."

To Rev. G. J. COWLEY Baowu, &e. Dnaa Sin,--I do not know that your kind letter really needs a reply, but I am impelled to protest against your ascription of great erudition to me, and your apology for adducing quotations from Bp. Butler and Augustine. It is to me quite ludicrous, though you mean nothing but respect. My erudition is spread over so many topics-, and my interest in the Christian Fathers was always so feeble, that if you knew the facts, you would rather a0count me unlearned, in an ecclesiastical sense.

I read, while an undergraduate, Davison's Lectures on Prophecy ; and think they added some spice of moderation and wisdom to my early religious tenets : in the direction to which you point. I am yours truly obliged, F. W. Nswnex."