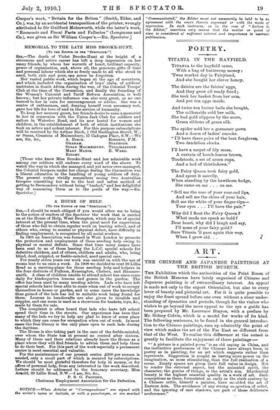 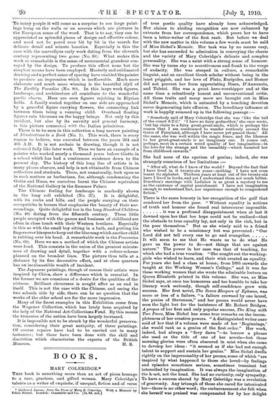 THE CHINESE AND JAPANESE PAINTINGS AT THE BRITISH MUSEUM.

THE Exhibition which the authorities of the Print Room of the British Museum have lately organised of Chinese and Japanese painting is of extraordinary interest. An appeal is made not only to the expert Orientalist, but also to every lover of beauty and pictorial art. For it is quite possible to enjoy the feast spread before one even without a clear under-

standing of dynasties and periods, though for the visitor who wishes to go beyond the mere appeal to the eye a guide has been prepared by Mr. Laurence Binyon, with a preface by Mr. Sidney Colvin, which is a model for works of its kind.

The following sentences, to be found in the general introduc- tion to the Chinese paintings, sum up admirably the point of view which makes the art of the Far East so different from that of the West. To realise this difference at the outset is greatly to facilitate the enjoyment of these paintings:—

" A. picture is a painted poem' is an old saying in China, and the instinctive preferences of the Chinese have always been, in poetry as in painting, for an art which suggests rather than represents. Suggestion is- sought as having more power on the imagination, as more stimulating, than the full realisation of a scene. Empty spaces are given their full value in design. Not to render the external aspect, but the animated spirit., the character, the genius of things, is the artist's aim. Rhythmical beauty is the highest essential quality in a work of art. Such conceptions as these, formulated as early as the sixth century by a Chinese critic, himself a painter, have moulded the art of Eastern Asia. The avoidance of any strong su_Tgestion of relief, and the ignoring of cast shadows, are part of these deliberate preferences." To many people it will come as a surprise to see large paint- ings hung on the walls or on screens which are pictures in the European sense of the word. That is to say, they can be appreciated as splendid pieces of design and effective colour, and need not be pored over bit by bit in the Search for delicate detail- and minute beauties. Especially is this the case with the marvellous early work dating from the eleventh century representing two geese (No. 30). What makes this work so remarkable is the sense of monumental grandeur con- veyed by the design. To produce this effect none but the simplest means have been employed. Masterly and sublimated drawing and it-perfect sense of spacing have enabled the painter to produce an impression which is ineffaceable. Much more elaborate and much more winning is the beautiful idyll of The Earthly Paradise (No. 80). In this large work figures, landscape, and architecture all contribute to the wonderful poetic charm; Here are seen figures rejoicing in Elysian fields. A family seated together on one side are approached by a graceful figure carrying flowers, the connecting link between them being a running child. Overhead floating figures rain blossoms on the happy beings. Not only by this incident, but also by its serenity and general harmony, is this picture connected with the Italian primitives.

There is to be seen in this collection a long narrow painting of Illustrations to a Book (No. 1). This work, there is every reason to believe, was executed between the years 364 and 405 A.D. It is not archaic in drawing, though it is not coloured fully like later work. Thus we have an example of a painter who worked nearly a thousand years before Giotto in a school which has had a continuous existence down to the present day. The history of this long line of artists is in many places obscure, and help is not obtainable from Chinese collectors and.students. These, not unnaturally, look upon us in such matters as barbarians, for, although condemning the Goths and Huns, we ourselves burnt the Chinese equivalent of the National Gallery in the Summer Palace.

The Chinese feeling for landscape is markedly shown

in the long roll exhibited (No. 37). It is delightful, with its rocks and hills, and the people carrying on their occupations iu houses that emphasise the beauty of their sur- roundings. 'Quite delightful too' is the long Hundred Children (No. 48) dating from the fifteenth century. These little people occupied with the games and business of childhood are often in close touch with their Western brothers. Especially is this so with the small boy sitting in a bath, and putting his fingers over his eyes to keep out the blue soap which another child is rubbing over his head.. A remarkable work is the Procession (No. 68). Here we see a method of which the Chinese artists were fond. This consists in the union of the greatest minute- ness of drawing and detail, together with a colour-scheme planned on the broadest lines. The picture thus tells at a distance by its fine decorative effect, and at close quarters has an inexhaustible wealth of incident.

The Japanese paintings, though of course their artists were inspired by China, show a difference which is essential. In the former we are conscious of a desire for the qualities of the virtuoso. Brilliant cleverness is sought after as an end in itself. This is not the case with the Chinese, and seeing the two schools side by side, there can be no question that the - works of the older school are far the more impressive.

Many of the finest examples in this Exhibition come from the Wegener Collection, which has lately been acquired by the help of the National Art-Collections Fund. By this means

• the treasures of the nation have been largely increased.., It is impossible not to be struck by the wonderful preserva- tion, considering their great antiquity, of these paintings. Of course repairs have had to be carried out in many instances'; but these have been done with the skill and discretion which characterise the experts of the -British