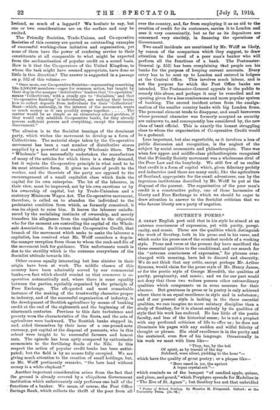 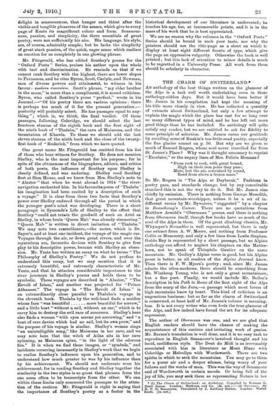 extreme conciseness of expression, yet with purity, perspi- cacity, and music. These are the qualities which distinguish the work of Southey, both in his prose and in his verse, and which make his prose one of the soundest models of a working style. Prose and verse at the present day have sacrificed the three essential qualities to the conditional, and our search for the "extreme conciseness of expression," for phrases over- charged with meaning, have led to discord and obscurity.

We do not think that any critic, except perhaps Mr. Arthur Symons, would claim for the prose style of Mr. Henry James, or for the poetic style of George. Meredith, the qualities of purity, perspicacity, and music ; and we for our part would

not deny that these two writers possess other extraordinary qualities which compensate us in some measure for their absence. But greatness in prose or in poetry is only achieved where there is an equal excellence in style and in substance ; and if our present style is lacking in the three essential qualities, we can imagine no more salutary discipline than a study of Southey, for it is almost entirely by its qualities of style that his work has endured. He has little of the poetic faculty, and less of the historical sense; he is not a prophet with any profound criticism of life to offer us ; he does not illuminate his pages with any sudden and wilful felicity of

thought or phrase. His chief excellence is in the purity and the sustained, even flow of his language. Occasionally in his work we meet with lines like— "They, too, by the toil Of spirit, as by travail of the day Subdued, were silent, yielding to the hour"— which have the quality of great poetry ; or a phrase like— "Here cased in ice, the apricot A topaz crystal-set "— which reminds us of the banquet " of candied apple, quince, and plum, and gourd," which Porphyro spreads for Madeline in

" The Eve of St. Agnes"; but Southey has not that unbridled

• Poems of Robert &Whey. By Maurice H. Fitzgerald. Oxford: at the

delight in sensuousness, that hunger and thirst after the visible and tangible pleasures of the senses, which give to every page of Keats its magnificent colour and form. Sensuous- ness, passion, and simplicity, the three essentials of great poetry, were not sufficiently his aim. His language, his style, are, of course, admirably simple; but he lacks the simplicity of great stark passion, of the quick, eager sense which realises an emotion for us completely in one glowing phrase.

Mr. Fitzgerald, who has edited Southey's poems for the " Oxford Poets " Series, praises his author upon the whole with tact and discrimination. He reminds us that if we cannot rank Southey with the highest, there are lower slopes to Parnassus, and he cites Byron, Scott, Carlyle, and Newman, men of diverse powers and attainment, to witness in his favour: 0(04 Pra OVVET070.1Y- Scott's phrase, "my elder brother in the muse," is more than a compliment, it is sound criticism. Byron, who called Southey's prose " perfect," wrote in his Journal:—" Of his poetry there are various opinions : there is perhaps too much of it for the present generation ;- posterity will probably select. He has passages equal to any- thing " ; which is, we think, the final verdict. Of these passages, following Coleridge, we should select the last fourteen stanzas of the eighth book and the first eight of the ninth book of " Thalaba," the cave of Maimuna, and the incantation of Khawla. To these we should add the last eleven stanzas of the ninth book and the close of the twenty- first book of "Roderick," from which we have quoted.

One great name Mr. Fitzgerald has omitted from his list of those who bear witness for Southey. He does not mention Shelley, who is the most important for his purpose ; for in spite of the obtuseness of the biographers, editors, and critics of both poets, the influence of Southey upon Shelley is clearly defined, and was enduring. Shelley read Southey first at Sion House, and we know from Mrs. Shelley's note to Alastor " that when he went abroad in 1814 " the river- navigation enchanted him. In his favourite poem of Thalaba' his imagination had been excited by a description of such a voyage." It is clear from these two facts that Southey's power over Shelley endured through all the period in which the younger poet's mind was developing. There is a short paragraph in Symonds's Life of Shelley to the effect that Southey "could not retain the goodwill of such an Ariel as Shelley, in whose brain 'Queen Mab ' was already simmering." " Queen Mab " is written in direct imitation of " Thalaba." We may note two resemblances,—the metre, which is Dr. Sayer's, and at least one incident, the voyage of the magic car. Voyages through the air, or down great rivers, and over the mysterious sea, favourite devices with Southey to give free play to his descriptive power, became with Shelley an obses- sion. Mr. Yeats has written an essay on what he terms " The Philosophy of Shelley's Poetry." We do not profess to understand this essay, but we may mention that it is extremely beautiful, and extremely characteristic of Mr. Yeats, and that he attaches considerable` importance to the river journeys in Shelley's poems and holds them to be symbolic. These voyages are described in " Alastor," " The Revolt of Islam," and another was projected for "Prince Athanase." The voyage in " The Revolt of Islam " is an extraordinarily close parallel to Thalaba's voyage in the eleventh book. Thalaba by the well-head finds a maiden

whose face " was beautiful more beautiful for sorrow," and a little boat "without a sail, without an oar," which is to carry him to destroy the evil race of sorcerers. Shelley's hero also finds a woman "with eyes serene yet sorrowing," and " a boat of rare device which bad no sail, but its own prow," and the purpose, of his voyage is similar. Shelley's woman sings " an unintelligible song," like Maimuna in her cave, and we may note here that the witch of Atlas sits in her cave spinning, as Maimuna spins, " in the light of the odorous fire." It is when we find these images, or " symbols," and incidents recurring incessantly in Shelley's work that we begin to realise Southey's influence upon his generation, and to understand how much greater he was by his influence than by his achievement. We should not underrate even his achievement, for in reading Southey and Shelley together the similarity in the two styles is so great that phrases from the one seem often to be transcripts from the other. We can within these limits only commend the passages to the atten- tion of the curious. Mr. Fitzgerald is right in saying that the importance of Southey's poetry as a factor in the

historical development of our literature is underrated; he touches his age, too, at innumerable points, and it is in the mass of his work that he is best appreciated.

We see no reason why the volumes in the " Oxford Poets " Series should be bound in such poor taste, nor why the printers should use the title-page as a sheet on which te display at least eight different founts of type, which give the page an oppressive vulgarity. Otherwise the book is well printed ; but this lack of attention to minor details is much to be regretted in a University Press. All work from them should be scholarly in character.