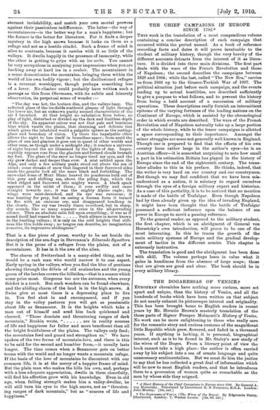 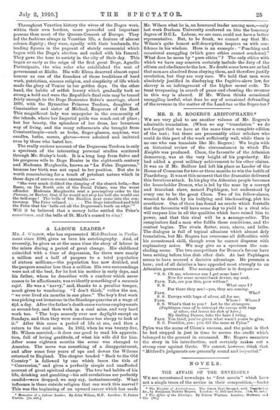 EUROPEAN chronicles have nothing more curious, more set apart and unique, than the history of Venice, and all the hundreds of books which have been written on that subject do not nearly exhaust its picturesque interest and originality. This has been brought home to English readers in recent years by Mr. Horatio Brown's masterly translation of the three parts of Signor Pompeo Molmenti's History of Venice. No work can be more enlightening to those who really care for the romantic story and curious customs of the magnificent little Republic which grew, flowered, and faded in a thousand years. If anything is lacking, it is personal, biographical interest, such as is to be found in Mr. Staley's new study of the wives of the Doges. From a literary point of view the book cannot take a high place : the author is often carried away by his subject into a sea of ornate language and quite unnecessary sentimentalism. But we must do him the justice to say that he has collected a great deal of information which will be new to most English readers, and that he introduces them to a procession of women quite as remarkable as the men by whose side they reigned.

A Short History of the Chief Campaigns in Europe since 1792. By General A. von Horsetzky. Translated by Lieutenant K. B. Ferguson, H.G.A. London : John Murray. [18s. net.]

f The Dogaressas of Venice ( The Wives of the Doges). By Edgounibe Staley. Illustrated. London: T. Werner Laurie. [128. 6d. net.]

Throughout Venetian history the wives of the Doges were, within their own borders, more powerful and important persons than most of the Queens-Consort of Europe. They led the fashions always in Venetian life, a feature of almost solemn dignity ; they were, equally with their husbands, the leading figures in the pageant of stately ceremonial which began with the Doge's election and ended with his funeral.

They gave the tone to society in the city of their day. This began so early as the reign of the first great Doge, Agnello Partecipazio, the wise ruler who established the seat of government at Rialto. His wife Elena deserved almost equal honour as one of the founders of those traditions of hard work, patriotism, sincere religion, and simplicity of life which made the glory of Venice in her golden days. On the other hand, the habits of selfish luxury which gradually took so strong a hold and were the Republic's final ruin may be traced fairly enough to the Doge Domenico Selvo's marriage, about 1070, with the Byzantine Princess Teodora, daughter of Constantine and sister of Michael, Emperors of the East.

This magnificent lady was unpopular in the community of the islands, where her Imperial pride was much out of place ; but her beauty, the splendour of her dress, her luxurious way of living, and the many refinements she brought from Constantinople—such as forks, finger-glasses, napkins, wax candles, baths, scents, gloves—were admired and imitated even by those who hated her.

The really curious account of the Dogaressa Teodora is only a specimen of the interesting personal studies scattered through Mr. Staley's book. It is a long leap from Selvo and his gorgeous wife to Doge Renier in the eighteenth century and Madonna Margherita, known as "La Falsa Dogaressa," because her birth was not equal to her position. But she is worth remembering for a touch of petulant nature which in these days of nerves seems excusable :—

"She very much disliked the clanging of the church bells,—San Basso, on the North side of the Ducal Palace, was the worst offender. Madonna Margherita sent a peremptory order to the Pievano, or Rector, that if he would not stop his bell she would cut the bell-rope ! The bells of the Basilica next came into the con- troversy. The Prior refused The Doge interfered and told the Prior that his bells set all the Dogaressa's teeth on edge?" Will it be believed that a money bribe settled the Prior's conscience, and the bells of St. Mark's ceased to ring !