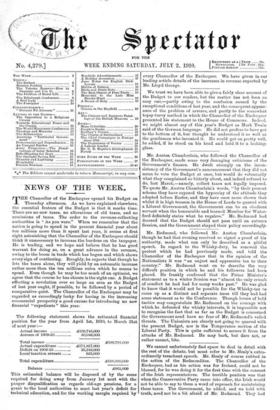 THE Chancellor of the Exchequer opened his Budget on Thursday afternoon. As we have explained elsewhere, the essential feature of the Budget is that it marks time. There are no new taxes, no alterations of old taxes, and no remissions of taxes. The order to the revenue-collecting authorities is " As you were." When we remember that the nation is going to spend in the present financial year about ten millions more than it spent last year, it seems at first sight astonishing that the Chancellor of the Exchequer should think it unnecessary to increase the burdens on the taxpayer. He is trading, and we hope and believe that he has good warrant for doing so, on a great advance in the revenue, owing to the boom in trade which has begun and which shows every sign of continuing. Roughly, he expects that though he lets the taxes alone, they will yield by an automatic increase rather more than the ten millions extra which he means to spend. Even though he may be too much of an optimist, we agree that the course be has chosen is the right one. A Budget . effecting a revolution over so large an area as the Budget of last year ought, if possible, to be followed by a period of comparative quiet. The Chancellor of the Exchequer may be regarded as exceedingly lucky for having in the increasing commercial prosperity a good excuse for introducing no new financial " expedients " this year.