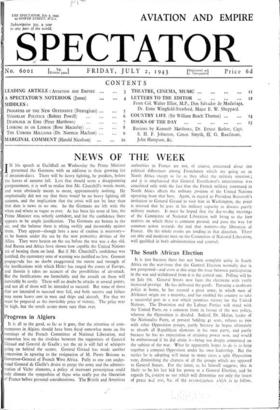 It is just because there has not been complete unity in South Africa on the war-issue that the General Election normally due is not postponed—and even at this stage the issue between participation in the war and withdrawal from it is the central one. Polling will be on July 7th. General Smuts now faces the electorate with vastly increased prestige. He has delivered the goods. Pursuing a moderate policy at home, he has created a great army, in which men of Afrikaner origin are a majority, and has enabled his country to take a successful part in a war which promises victory for the United Nations. The Dominion and the Labour Parties will stand with the United Party, on a common front in favour of the war policy, whereas the Opposition is divided. Indeed, Dr. Malan, leader of the Nationalist Party, at present holding 41 seats, refuses to join with other Opposition groups, partly because he hopes ultimately to absorb all Republican elements in his own party, and partly because he has no expectation of attaining power now, and would be embarrassed if he did attain it—being too deeply committed on the subject of the war. What he apparently hopes to do is to keep together a compact Opposition under his on leadership. But the tactics he is adopting will mean in many cases a split Opposition vote, diminishing the chances of all the groups which are opposed to General Smuts. For the latter, as he himself suggests, this is likely to be his last bid for power at a General Election, and he regards fhi contest- as one which will determine not only the issues of peace and %war, ha... of the recon,4actacin which is tp follow.