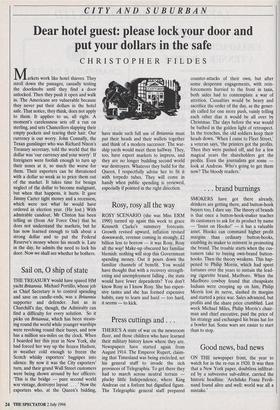 kind of prose — so traditional it is not There is much mention of fisticuffs, for which Donleavy claims to have had a certain talent, though I have heard other- wise. Nike Donleavy couldn't fight his way out of a wet paper bag': Ernest Gebler.) But there are conflicting accounts of everything in Dublin, including the current state of the weather, and it does not really matter which drunken young man punched another in the face 40 years ago. It served Donleavy's comedic purpose to let on that the most common form of social intercourse in the city was brawling, and it still does.

The typescript of Mike's novel (do not ask me why he is called Mike. I never got around to asking him and he doesn't explain) languished for some years unpublished, lavish advice concerning its prospects being furnished by Behan and my uncle. It was simply too bawdy to be pub- lished by any respectable firm. Donleavy eventually sent it to Maurice Girodias, who ran, among other lines, the Travellers' Companion series from Paris.