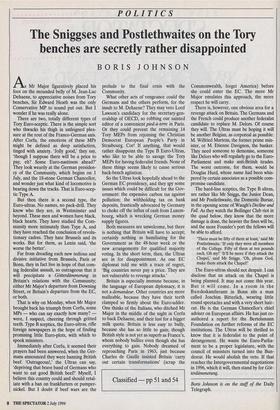 Mr Major figuratively placed his foot on the mounded belly of M. Jean-Luc Dehaene, to appreciative noises from Tory benches, Sir Edward Heath was the only Conservative MP to sound put out. But I wonder if he was really alone.

There are two, totally different types of Tory Euro-sceptic. There is the simple sort who thwacks his thigh in unfeigned plea- sure at the rout of the Franco-German axis. After Corfu, the emotions of these MPs might be defined as deep satisfaction, tinged with anxiety. 'Jolly good,' they say, `though I suppose there will be a price to pay, eh? Some Euro-nastiness ahead?' They look wearily at the German presiden- cy of the Community, which begins on 1 July, and the 18-stone German Chancellor, and wonder just what kind of locomotive is bearing down the tracks. That is Euro-scep- tic Type A.

But then there is a second type, the Euro-ultras. No names, no pack-drill. They know who they are, in Westminster and beyond. These men and women have black, black hearts. They have studied the Com- munity more intimately than Type A, and they have reached the conclusion of revolu- tionary cadres. They hate Brussels and its works. But for them, as Lenin said, 'the worse the better'.

Far from dreading each new tedious and divisive initiative from Brussels, Paris or Bonn, they in fact live in hope of that com- ing federalist assault, so outrageous that it will precipitate a GOtterdammerung in Britain's relations with the Community; either Mr Major's departure from Downing Street, or Britain's departure from the EC, or both.

That is why on Monday, when Mr Major brought back his triumph from Corfu, some MPs — who can say exactly how many? were, I suspect, cheering through gritted teeth. Type B sceptics, the Euro-ultras, rifle foreign newspapers in the hope of finding promising little Euro-plots, with which to spook ministers.

Immediately after Corfu, it seemed their prayers had been answered, when the Ger- mans announced they were banning British beef. `Outrageous!,' the Ultras can say, `depriving that brave band of Germans who want to eat good British beef!' Myself, I believe this country could and should retal- iate with a ban on frankfurters or pumper- nickel. But I doubt if beef wars are the prelude to the final crisis with the Community.

What other acts of vengeance could the Germans and the others perform, for the insult to M. Dehaene? They may veto Lord Lawson's candidacy for the secretary-gen- eralship of OECD, so robbing our sainted editor of a convenient pied-a-terre in Paris. Or they could prevent the remaining 14 Tory MEPs from rejoining the Christian Democrat European People's Party in Strasbourg. Cor! If anything, that would rather disappoint the Type B Euro-Ultras, who like to be able to savage the Tory MEPs for having federalist friends. None of these things seems likely to cause serious back-bench agitation.

So the Ultras look hopefully ahead to the German EC presidency, and they spy some issues which could be difficult for the Gov- ernment: the expensive carbon tax against pollution; the withholding tax on bank deposits, frantically advocated by Germany to choke off the influx of cash from Luxem- bourg, which is wrecking German money supply figures.

Both measures are unwelcome, but there is nothing that Britain will have to accept; certainly nothing as humiliating for the Government as the 48-hour week or the new arrangements for qualified majority voting. In the short term, then, the Ultras are in for disappointment. As one EC diplomat told me with a trace of regret, `Big countries never pay a price. They are not vulnerable to revenge attacks.'

Britain is especially immune because, in the language of European diplomacy, it is not a dernandeur. Other countries are more malleable, because they have their teeth clamped so firmly about the Euro-udder. One thinks of the Italians, who ditched Mr Major in the middle of the night in Corfu to back Dehaene, and their lust for a bigger milk quota. Britain is less easy to bully, because she has so little to gain; though British style is not yet as superb as France's, whom nobody bullies even though she has everything to gain. Nobody dreamed of reproaching Paris in 1963, just because Charles de Gaulle insisted Britain 'carry out certain transformations' (scrap the Commonwealth, forget America) before she could enter the EC. The more Mr Major emulates this approach, the more respect he will carry.

There is, however, one obvious area for a revenge attack on Britain. The Germans and the French could produce another federalist candidate to replace M. Delors. Of course they will. The Ultras must be hoping it will be another Belgian, as corporeal as possible: M. Wilfried Martens, the former prime min- ister, or M. Etienne Davignon, the banker. They need someone to demonise, someone like Delors who will regularly go to the Euro- Parliament and make anti-British tirades. The worst outcome, for them, would be Douglas Hurd, whose name had been whis- pered by certain associates as a possible com- promise candidate.

The hard-line sceptics, the Type B ultras, are rather like Mr Sniggs, the Junior Dean, and Mr Postlethwaite, the Domestic Bursar, in the opening scene of Waugh's Decline and Fall. As they watch the Bollinger Club riot in the quad below, they know that the more damage is done, the heavier the fines will be, and the more Founder's port the fellows will be able to afford.

The Euro-ultras should not despair. I can disclose that an attack on the Chapel is being planned. It may not come this year. But it will come. In a room in the Bun deskanzleramt in Bonn sits a man called Joachim Bitterlich, wearing little round spectacles and with a very short hair- cut. He is the German Chancellor's chief adviser on European affairs. He has just co- authored a report for the Bertelsmann Foundation on further reforms of the EC institutions. The Ultras will be thrilled to know that it is federalist to the point of derangement. He wants the Euro-Parlia- ment to be a proper legislature, with the council of ministers turned into the Bun- desrat. He would abolish the veto. If that reaches the Intergovernmental negotiations in 1996, which it will, then stand by for Gel- terdammerung.

Boris Johnson is on the staff of the Daily Telegraph.