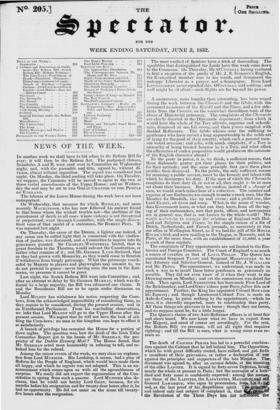 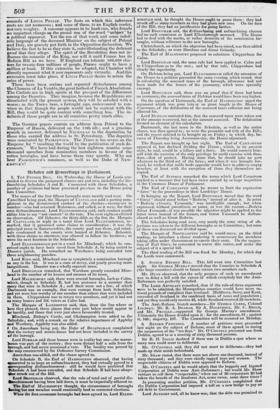 The death of CASIMIR PERIER has led to a powerful

combine-- tion against the Cabinet that he left behind him. The Opposition, which he with great difficulty routed, have rallied, andel* forth a manifesto' of their grievances, or rather a declaration of War against the principle's and supporters of the late Minister. Tlaw-, document was agreed to; after an earnest debate, at the mansion' of the elder LAFITTE. It is signed by forty-seven Dejnities,heing, nearly the whole at present in Paris; but the accession of a hun::^- dred and forty more is confidently expected : among the ;names. are those of the LAFITTES, the 'LAFAYETTES, MAUG#1*.A1111-41 General LAMARQUE, who signs by procuration, fre; aY.14 bed, as the 'last proof of his (Republican spirit. T

and indeed only real subject of complaint is, that ,

the Revolution of the Three Days has it ip;,, • -the councils of Louis PHILIP. The facts on which this inference rests are not numerous ; and some of them, to an English reader, riot very weighty. A reasoner appears to be hard-run, who founds an important charge on the casual use of the word " subject" by a political opponent. Yet the use of that word, and some indefi- iiite language of the deceased Minister on the subject of Poland and Italy, are gravely put forth in the Opposition declaratiOn. We believe the fact to be as they state it, notwithstanding the deficient proof that they allege. The spirit of the Revolution does not in- fluence the councils of the King, nor will it until France has its Reform Bill as we have. If England can tolerate 800,000 elec- tors for twenty-four millions of people, France ought to have a million at least. If this extension be adopted, the Chamber will directly represent what it now represents only virtually. And this extension must take place, if Louis PHILIP desire to retain the reins of power.

There have been serious and repeated disturbances among the Chouans of La Vendee, the great hotbed of French Absolutism. The Carlists are in high spirits at the prospect of the differences among the Deputies. They imagine, because the Republicans are dissatisfied With the present system, they will be satisfied with a worse; as the Tories here, a fortnight ago, endeavoured to con- vince us that though the people would not be content with the Bill, they would be quite content with something less. The in- tellects of these people are in all countries pretty much alike.