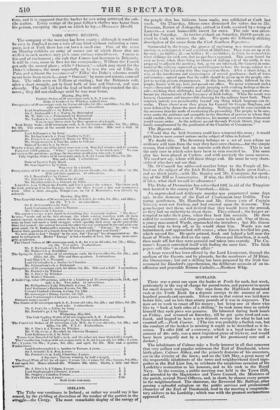 The Tithe war continues in Ireland ; or rather we would say it has ceased, by the yielding at discretion of the weaker of the parties in the struggle-the Clergy. The most remarkable display of the energy of

the people that has hitherto been made, was exhibited at Cork last week. On Thursday, fifteen cows distrained for tithes due to Mr. Freeman, Rector of Ardngeehy, arrived in Cork, escorted by a troop of Lancers-a most honourable escort for cows. The sale was adver- tised for Saturday. At twelve o'clock on Saturday, 10,000 people ar- rived in Cork to witness the sale. We quote the following striking description of the scene from the Corh Southern Rporter- Surrounded by the troops, the ,process of auctioning was commenced-theauctioneer, auctioneer, estranger, it is said a resident of Middleton. They were set up at for each-no bidder ; 21.-no bidder ; It -no bidder ; in short, he descended to three shillings for each cow, but no purchaser appeared. This scene lasted for over an hour, when, there being no chance of making sale of the cattle, it was proposed to adjourn the auction ; but, as we are informed, the General in com- mand or the military expressed an unwillingness to have the troops subject to a repetition of the harassing duty thus imposed on them. After a shot t delay, it at the interference and remonstrance of several gentlemen-both of town. and country-agreed upon that the cattle should be given up to the people, sub- ject to certain private arrangements. At this hour, the cattle, followed by the people, frantic with joy, have just passed our office. We never witnessed such a seene-thousands of the country people jumping with exulting feelings at the re- sult-wielding their shillelaghs, and exhibiting all the other symptoms of exu- berant joy characteristic of the buoyancy of Irish feeling. When the result was known, clamorous and irrepressible cheering for the military burst forth. Their conduct, indeed, was praiseworthy beyond any thing which language can de- scribe. Three cheers were then given for General Sir George :gingham, and were followed by shouts the most deafening. Nothing could be more suitable to the occasion than his mode of conducting the proceeding. The people, to be sure, were under the guidance and amenable to the direction of persons in whom they could confide ; but even were it otherwise, his manner and courteous demeanour would secure order. As the military passed through Patrick Street, they were loudly complimented by the gentlemen of the Chamber of Commerce."

The Reporter adds- " Would that the Irish Secretary could have witnessed this scene ; it would guide him to more correct notions entire subject of tithes in Ireland."

We doubt this. The Secretary belongs to a set of men whom no evidence will turn from,the way they have once chosem-for the simple

reason, that evidence had no concern with their choice. This is not the only case in which sales have been in vain resorted to. The same play has been played at Carlow, and with precisely the same success. We need not say, where will these things end. He must be very short- sighted who does not see that. Mr. O'Connell has addressed another letter to the People of Ire- land on the subject of the Irish Reform Bill. He finds great flult- and we think justly-with Mr. Stanley and Mr. Crampton, for speak- ing of the Bill as Conservative. If true, the Bill is evidently a cheat ; if false, what shall we call its advocates ?

The Duke of Devonshire has subscribed 1001. in aid of the Trappists now located in the county of Waterford.-Globe.

An unprovoked and deliberate murder was perpetrated some days ago, in the demesne of the Earl of Charlemont near Dublin. Two young gentlemen, Mr. Hamilton and Mr. Green (son of Captain Green), went out fowling, and had entered upon the demesne. The gamekeeper met them, and desired that they would leave the ground, as they had no authority to shoot there. They refused ; the keeper at- tempted to take their guns, when they beat him severely. He then called for assistance, and three gardeners came to his aid. One of these, a young man named Warde, approached the intruders ; but Mr. Green warned him to keep off, or he would shoot him. Warde was not intimidated, and approached still nearer ; when Green levelled his gun, which missed fire. He again primed, fired, and lodged a ball near the heart of Warde, who died on the spot. Green and Hamilton, it is said, then made off, but they were pursued and taken into custody. The Co- roner's Inquest contented itself with finding the mere fact. The Irish papers call this " an unfortunate affair."

A large reward has been offered by the Lord Lieutenant, through the medium of the Gazette, and by placards, for the murderers of M'Briar, the Orangeman ; but not a shilling has been proposed by the Irish Go- vernment for Bamford's apprehension, the deliberate assassin of an in- offensive and peaceable Roman Catholic.-Northern Whig.