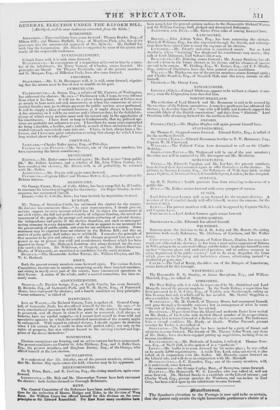 GENERAL ELECTION UNDER THE REFORM BILL. [Abridged, and in some

ARINGDON.—TWO candidates have come forward : Thomas Bowles, Esq., of Milton Hill ; and Thomas Duffield, Esq., of Marcham Park, who, five or six years ago, was the unsuccessful opponent of Mr. Maherly. Mr. Duffield has with him the Corporation. Mr. Bowles is supported by some of the gentry arid nearly all the respectable tradesmen.

Colonel Jones will, it is said, come forward.

BreeraNc consequence of a requisition addressed to him by a num- ber of the inhabitants, Sir -Harry Verney-, of Claydon, comes forward. His principles are liberal. Sir Thomas Fremantle, one of the present members, and G. Morgan, Esq., of. Billesden Park, have also come forward.

STOCKPORT. —Mr. E. D. Davenport will, it is said, come forward, stipulat- ing that his return must be free of cost or trouble on his part.

.COCKERMOUT11.—A. Green, Esq., a relative of Mr. Curwen, of Workington, has addressed the electors. He says—" Parliament will, I hope, be very different from what it has been. It will not be a place where gentlemen of fashion may go merely to hear news and seek amusement, or where the connexions of aristo- cratical families may go to obtain payment for public services never performed. It will be simply a place of national business, as it ought always to have been. A due attention on it will be an anxious and a laborious duty, for the faithful dis- charge of which every member must seek his reward only in the approbation of his constituents. I have lived so long iu Coekermouth, that my political opi- nions are probably not unknown to you. I have been for many years reproached for being a Jacobin, a leveller, and a radical, as each of these several terms of in- tended reproach successively came into use. I have, in fact, always been a Re- former, and I have now great satisfaction in seeing that change for which I have

long wished about to take place."

L SKE A RD.—Charles Buller junior. Esq., of Pulvellen. l-'ALMorru ANn PENRYN. Stewart, one of the present members, has been canvassing the future constituency.

Sir George Crewe, Bart., of Calks Abbey, has been compelled, by ill health, to renounce his intention of standing for the county. Sir Roger Greeley, in con- sequence, has announced hime71f. Deienv.—Sir C. Colville, Bart., has been invited, by requisition, to stand.

Mr. Bowes, of Streatlam Castle, has addressed the electors for the county. Ile declares Iris sentiments thus—" As your representative, I should give my anxious support to every measure Which has for its object the maintenance of our civil rights, the full and perfect security of religious freedom, the moral ad- vancement of tire people, the prompt and certain extinction of colonial slavery, the independence and purity of the elective franchise, and such an uncompro- mising economy in every department of the state as appears to me necessary for the preservation of public credit, and even for our existence as a nation. Some • statement may be expected from me relative to the Reform Bill; and this no motive of petty policy shall induce me to withhold. I conceive the principle of that measure to be just and salutary; and the changes proposed have never ap- peared to me to possess that wild and revolutionary tendency which has been imputed to them." Mr. IIedworth Lambton also comes forward for the Caine (tire north) division. Mr. Wilkinson, of Harperly, and Mr. Robert Duneome Shako, of Whitworth, ara mentioned as candidates for the south division. DOR HAM.—The Honourable Arthur Trevor, Mr. William Chaytor, and Mr.

Both the present county members come forward again. The various Reform Committees, twenty-one in number, comprising nearly three hundred members, and sitting in nearly every part of the county, have commenced operations in their favour. A union of the whole, under a central committee, has been re- cently made. GLOUCESTERSHIRE.

Sraoun.—G. Powlett Scrope, Esq., of Castle Combe, has come forward ; D. Ricardo, Esq., of Gatcombe Park, and W. H. Hyett, Esq., of Painswick House, have canvassed the electors; and a fourth candidate on Tory principles, "name unknown," is talked of.

ISLE OF Wnerer.—Sir Richard Simeon, Bart. is spoken cf. General Camp bell, of Gatcombe Park, has also offered himself for the isle. He says—" As every constitutional measure by which the purity of the elective franchise may be preserved, and all abuses in church or state be corrected, shall always, as hitherto; have my cordial support,—so I cannot lend myself to those will and speculative opinions by which the established institutions of the country might be endangered. With regard to colonial slavery, I should support its abolition when I felt certain that it could he done with perfect safety, not only to the rights of property, but also without hazard to the existing comfort and hap- piness of the slaves themselves."

Election committees are forming, and an active canvass has been commenced. The present candidates are Paulett St. John Mildmay, Esq., and J. Buller East, Esq., the present members, and Bingham Baring, Esq., of the Grange, who offered himself at the last election.

It is understood that Mr. Atherley, one of the present members, retires, and that Mr. Barlow Hoy again enters the field, whoever may be Iris opponents.

LEOMINSTER.—Mr. Bish and Mr. Merewether Turner have both canvassed the electors : both declare themselves thorough Reformers.

The Central Committee of the Reformers have been making strenuous exer- tions for the reelection of Messrs. Hodges and Rider, in the division of Wes Kent. Sir William Geary has offered himself for this division on the same Principles as Sir Edward Kmatchbull. For East Kent many candidates hate

been nanwd, but the general opinion inclines to the Honourable Richard Watson and Sir William Cosway, both pledged and determined Reformers. SANDWICH AND DEAL.—Mr. Grove Price talks of coming forward here. LANCASHIRE.

Borerox.— John Ashton Yates, Esq., has been canvassing the electors. Marshall Williams, Esq., has also canvassed through his friends, and subscrip- tions have been entered into to meet the expenses of his election.

LIVERPOOL.—Mr. Ewart's reelection Is considered secure. Not so Lord Sandra's' whose " wavering" has displeased his constituents very much ; they talk of Lord Molyneux, Earl Sefton's eldest son.

BLACKBURN.—Dr. Downing comes forward; 'Mr. Jeremy Bentham has ad- dressed a letter to the fnure electors in his favour, and his chances of success arc said to be certain. W. Fielding, Esq., W. Turner, Esq., and J. F. Hindle, Esq., natives of Blackburn, have also been pointed out as candidates. WIG AN. —Mr. Thicknesse, one of the present members, comes forward again ; and Charles Standish, Esq., of Standish Hall, near this town, intends to offer himself.

LINCOLN ( City).—Colonel Sihthorpe appears to be without a chance of suc- cess; even the Corporation have deserted him.

The reelection of Lord Howick and Mr. Beaumont is said to be secured by the exertions of the Reform committees. A nameless gentleman has addressed the electors ; he describes himself as "one who will boldly and fearlessly support the venerable fabric of the British constitution," and dates from " Alnwiek." Lord Ossulston talks of coining forward for the northern division.

NIsr,eie tr3o...eere—The Political Union have determined to call on Sir Charles w.o STOKE-rrox-Tnexere—Mr. Wedgwood will lie one of the new members; the other seat will be contested by Mr. Davenport and Mr. Heathcote.

Werms.—Mr. Edwards Vaughan and Mr. Lee Lee, the present member:, have declared their determination again to offer themselves to the electors. In addition to 'Norman Lmtiont, Esq., the Reformers of Wells have lately invited James Ogilvie, of Mortimer Street, Cavendish Square, Loudon ; he has accepted.

Sir H. E. Bunbury's health prevents hint from attending to the cares of a public life. Buev.—Mr. Boilemi conies forward with every prospect of success.

Lord John George Lennox will come forward for the western division. A member of the Cavendish &mile, will offer himself, so runs the rumour, for the eastern di::trict.

L EW The present members will, it is said, be opposed by Captain Shelley and Captain Lyon.

BIn`IINGHA]I.—Mr. Edmonds has offered himself.

Lo6. Cni'rrrer.xneer.—Mr. J. T. Mayne, of Teffont House, IIindon, leis come for- ward and addressed the electors ; to has been a most active supporter of Reform in Wilts, going as flar as universal suffrage and the ballot: Be pledges himself to vote against "siurcure places and undeserved pensions, and to enforce economy in every department of the public service ;" and to do away altogether the taxes which pine, an the labouring and industrious classes, substituting instead "a graduated pn:perty-tax."

CA LNE.—The Earl of Kerrv, the eldest son of the Marquis of Lansdowne, comes forward for this borough.

The Honourable E. G. Stanley, or James Brougham, Esq., and William Marshall, Esq., are talked of.

The West Riding will, it is said, be represented by Mr. Strickland and Lord Morpeth, two of the present members. In the North Riding, a requisition has been presented to E. S. Caley, Esq., of Wydale, near Scarborough, calling on him to come forward, to which call he has acceded. Mr. Martin Stapylton is also a candidate in the North Riding. WA ICE FIELD.—Mr. M. Gaskelh`of norms House, had announced himself, and gone through a favourable canvass; but in consequence of what he terms "tire rile of family disunion," Ire has retired. BR A urn:: n.—Deputations from the liberal and moderate Tories have waited on Mr. Banks, of Leeds (the only decided liberal member of its corporation), requesting bine to come forward as a Reformer—he has assented. The Reformers have a second candidate, Mr. Hardy, of Heath. Walker Farrand, present member for Tralee, is also talked of.

SHE FFIELIL-3ir. Buckingham has been invited by a party of friends and admirers to come forward.. The friends of Mr. Thomas Aslinc Ward, and those of Mr. Bailey, have also been engaged getting up requisitions, inviting them to become candidates.

KNA RESROROUC H.—Mr. Richards, of London, is talked of. Thomas Raw- son, Esq., of Niehl Hall, is also spoken of as a "moderate."

11 UDDERS FIELD.—.T. C. Ramsden, Esq., one of the county members, will, it is understood, conic forward. SCA RHOROUG FL—Sir George Cayley, Bart., of Brompton, comes forward. HArarAx.—The Honourable W. S. Lascelles, who was talked of, will not come forward. Mr. Michael Stocks is a candidate on the Liberal interest; and Charles Wood, Esq., present member for Wareham, and son-in-law to Earl Grey, has been called upon by the inhabitants to come forward.