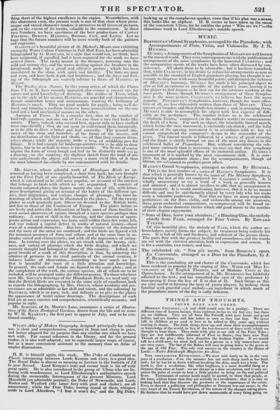 HAYDN'S Grand symphonies, arranged as above. By HUMMEL.

This is the first number of a series of HAvox's Symphonies. It is that which is generally known by the name of The Mildary Symphony, forming the last of the set composed for SAtomox's concerts. It is wholly unnecessary to say a word of a work so generally known and admired ; and it is almost needless to add, that its arrangement is most masterly. It is worth mentioning, however, that it is by no means difficult, and may be satisfactorily played by every lady who has made even a tolerable proficiency. Now that we have so many respectable performers on the flute, violin, and violoncello among our amateurs, these great orchestral compositions, so compressed, will be found in- valuable in those domestic circles Aich add good music to the number of their elegant enjoyments.