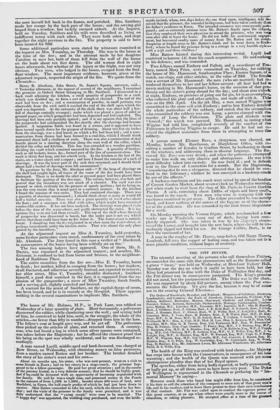 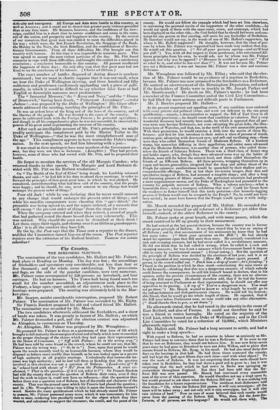 The health of the King was received with loud cheers,—his Majesty has crept into favour with the Conservatives, in consequence of his late wavering ; and the health of the Queen was received with yet mote obstreperous plaudits than that of her Royal spouse. The speeches, either from being badly reported, or badly pronounem4, or badly got up,. or all three, seem to have been very poor. The Duke of Wellington is represented in the Chronide as prefacing the " mortal Memory" by saying— However much those who heard him might differ from him, he considered it his duty to call the attention of the company to some acts of that great man's life, and to his conduct, and to leave those present to draw their own conclusions of that conduct. Mr. Pitt was called upon to conduct the supreme power of this great country, at an age when others were usually more in the course of education, or taking pleasure. He accepted office at a time of the greatest difficulty and emergency. All Europe and Asia were hostile to this country, as well as America; and it could not be denied that greater party violence prevailed than at any time since. ME firmness, however, and the confidence of his Sove- reign, enabled him in a short time to restore confidence and union in the coun- cils of the nation, and prosperity and happiness to the country. By the revival of our resources, that great man was enabled to meet the difficulties placed in Lis way ; which were, the first French Revolution, the Stoppage of the Bank, • the Mutiny in the Navy, the Irish Rebellion, and the establishment of Revolu- tionary Governments. From all these difficulties Mr. Pitt brought out this country with honour. At this time it was impossible to maintain peace. This was agreed to among the most violent partiSans of the day. Mr. Pitt found resources to cope with these difficulties, and brought the contest to a satisfactory conclusion ; a conclusion honourable to this country. • All present recollected the happiness of those days : the only alloy was, that that great man had not lived to see the conclusion of his labours. ( Cheers ad libitum.)

The exact number of bottles disposed of during dinner is nowhere mentioned ; but we must in charity suppose that it was not small, when we hear the Duke of Wellington uttering, and three hundred and fifty noblemen and gentlemen vociferously applauding such a piece of galli- maufry, in which it would be difficult to say whether false facts or bad English or downright nonsense most predominate.

The " Immortal Memory," the " Army and Navy," and the " House of Brunswick," having been drunk, " Protestant Ascendancy"—credat Adams I—was proposed by the Duke of Wellington ! His Grace after- wards addressed the meeting, touching the principles of Mr. Pitt— He was an ardent lover of the King and of the laws of the country, and of the liberties of the people. He was devoted in the cause of the country. In peace he cultivated trade with the Foreign Powers ; he protected agriculture ; and though in all his comprehensive plans he was not successful, he exercised the powers of his great mind in promoting the interests of his country.

After such an intelligible account of Mr. Pitt's principles, we might readily anticipate the compliment paid by the Master Tailor to the Duke of Wellington—" that he was the most straightforward man of the age." This compliment appears to have warmed the Duke's imagi- nation. In the next speech, we find him labouring with a jest— It was usual at these meetings to have some members of the Government pre- teat, but they were not then so fortunate. (Laughter.) They had present, however, some of those who had served with Mr. Pitt, and he proposed their health.

He forgot to mention the services of the old Marquis Camden ; who returned thanks to this speech. The Marquis and Lord Bathurst di- vided with Mr. Pitt on his Reform resolutions !

On " The Health of the Earl of Eldon" being drunk, his Lordship returned thanks, and said—" he had felt it his duty to attend these meetins., in order to forward the principles of that great great man, to which he was pledged. He considered, notwithstanding what had been said of the country, that the people were happy ; and he should, for one, never consent to any change that would endanger the present order of things."

When the company entered and when they retired, a crowd of people That had gathered round the doors hissed them very vehemently. This was unkind. Why should the poor inert be disturbed at their drink ?

Let them enjoy their tipple, and chirrup over it as blithe as grasshoppers. Alas ! it is all the comfort they have left.

By the by, the Post says that the Times sent a reporter to the dinner, and that the Committee turned him out of the room. The Post reporter rejoices over the extrusion of his Radical brother. Tantame ire animis tdestibus?