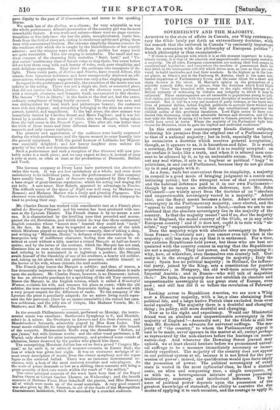 Mr. Charles Dance has worked with considerable tact at a

French piece called Le Mariage d Orgueil; and his version has been produced with suc- cess at the Lyceum Theatre. The French drama is by no means a new one. It is characterized by the levelling tone that preceded and accom- panied the old Revolution, and which found its way into those sentimental English comedies whose "honest men" boasted they could look "lords" in the face. In fact, it may be regarded as an expansion of the trick which Mirabeau played to annoy his father—namely, that of taking a shop, and writing up " Mirabeau, Hosier," in defiance of his aristocratic origin. A bourgeoise lady of indifferent character, finding that she cannot be ad- mitted at court without a title, marries a ruined Marquis at half-an-hour's notice; and by the terms of the contract, which the Marquis has not read, ffixmisses him as soon as the ceremony is over. Disgusted at this conduct, and refusing to be maintained in so inglorious a position, the Marquis avails himself of the friendship of one of his creditors, a hearty old cobbler, and, taking up his abode with this plebeian associate, cobbles himself, to the horror of his wife, whose château the stall confronts.

The French play leaves the Marquis a cobbler; and thus, of course, a fine democratic impression as to the vanity of all social distinctions is made upon the audience. Mr. Charles Dance, however, is no Democrat; indeed, he has an allowable penchant for a sprinkling of the old Tory sentiment. Bence the Marquis in the English version, which is called A Wonderful Woman, reclaims his wife, and resumes his place at court; while the old cobbler, the true representative of the Democratic feeling, is endowed with a very proper respect for the difference of ranks. To the company of the Lyceum the piece is peculiarly adapted; for no actors living could repre- sent the fair parvenue, (here by no means unamiable,) the ruined but care- less nobleman, and the jolly son of Crispin, like Madame Vestris, Mr. C. Mathews, and Mr. F. Matthews.