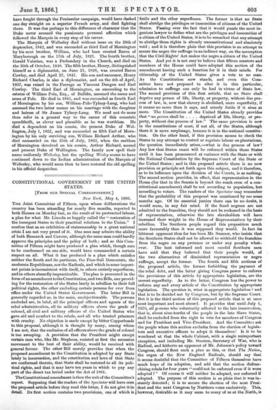 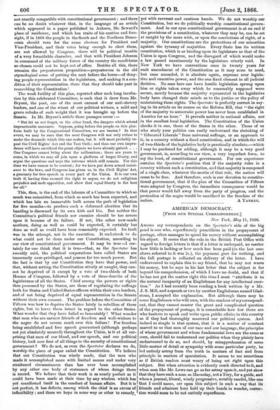 CONSTITUTIONAL GOVERNMENT IN THE UNITED STATES.

[Flow OUR SPECIAL CORRESPONDENT.] New York, May 4, 1866. THE Joint Committee of Fifteen, upon whose deliberations the country has been attending for nearly five months, reported to both Houses on Monday last, as the result of its protracted labour, a plan for what Mr. Lincoln so happily called the "restoration of the insurgent States to their practical relations in the Union." I confess that as an exhibition of statesmanship in a great national crisis I am not very proud of it. One man may admire the ability of both Bismarck and Cavour, although the same man could hardly approve the principles and the policy of both ; and so this Com- mittee of Fifteen might have produced a plan which, though sure to be condemned on one side, would have commanded a certain respect on all. What it has produced is a plan which satisfies neither the South and its partizans, the Free-Soil Democrats, the moderate Republicans, nor the Radicals, and which in some import- ant points is inconsistent with itself, in others entirely superfluous, and in others absurdly impracticable. The plan is presented in the form of an amendment tothe Constitution, and two Bills, one provid- ing for the restoration of the States lately in rebellion to their full political rights, the other excluding certain persons for ever from office under the United States Government. The latter Bill is generally regarded as, in the main, unobjectionable. The persons excluded are, in brief, all the principal officers and agents of the rebel administration, all its military officers above the grade of colonel, all civil and military officers of the United States who gave aid and comfort to the rebels, and all who treated prisoners with cruelty. No objection is made except by bitter Copperheads to this proposal, although it is thought by many, among whom I am not, that the exclusion of all officers above the grade of colonel is too sweeping. A provision that the President might except certain men who, like Mr. Stephens, resisted at first the secession movement to the best of their ability, would be received with general favour. The other Bill merely provides that when the proposed amendment to the Constitution is adopted by any State lately in insurrection, and the constitution and laws of that State are conformed thereto, that State shall be restored to all its poli- tical rights, and that it may have ten years in which to pay any part of the direct tax levied under the Act of 1861.

The weak futility of this plan, reported after such long incuba- tion by this celebrated Committee, is such that it drew from Mr. Bryant, the poet, one of the most earnest of our anti-slavery leaders, and one of the wisest of our political writers, a mild and grave rebuke of such weight that it was brought up before the Senate. In Mr. Bryant's article these passages occur :— " But let us not forget, on the other hand, the dangers which attend impracticable measures. Suppose, going before the people on this plat- form built by the Congressional Committee, we are beaten ? In that event, we may be sure that the next Congress will not only refuse to make the demands which this one makes, but it will most probably re- peal the Civil Rights' Act and the Test Oath; and thus our own impru- dence will have sacrificed the great objects we have already gained. . . . One Congress cannot bring about the millennium ; there are years to come, in which we may all join upon a platform of larger liberty, and argue the questions and urge the reforms which still remain. For this time we have reason to be content ; for we have put down armed resist- once to the laws, and Congress has given us, in the Civil Rights' Act, a guaranty for free speech in every part of the Union. It is our own fault if, having thus secured the right to argue, we do not enlighten prejudice and melt opposition, and show that equal liberty is the best for all."

This, then, is the end of the labours of a Committee to which so much was committed, from which so much has been expected, and which has lain an immovable bulk across the path of legislation for five months—to produce such a deformed abortion that its bantling is disowned by its own kith and kin, But neither the Cordmittee's political friends nor enemies should be too severe upon it because of its failure. If not, like other new-made mothers, doing as well as could be expected, it certainly has done as well as could have been reasonably expected. Its fault was in the attempt, not in the execution. It undertook to do what could not be done under our Constitution, according to our view of constitutional government. It may be true—I cer- tainly for one think that it is true—that, as the Spectator has recently said, the political corporations here called States are immensely over-privileged, and possess far too much power. But the fact is that by our Constitution they have that power, and that, without setting the Constitution utterly at naught, they can- not be deprived of it except by a vote of two-thirds of both Houses of Congress, followed by a vote of three-fourths of the legislatures of all the States. Chief among the powers or rights thus possessed by the States, are those of regulating the suffrage both for States and United States officers within their own borders, and of not being deprived of equal representation in the Senate without their own consent. The problem before the Committee of Fifteen was how to deprive the States lately in rebellion of these rights, but to leave them intact in regard to the other States. What wonder that they have failed so lamentably ! What wonder that men who are earnest friends of freedom and well-wishers to the negro do not mourn much over this failure ! For freedom being established and free speech guaranteed (although perhaps not yet absolutely secured) throughout the Union, is it at all sur- prising that men of our blood, and our speed', and our political history, look now first of all things to the security of constitutional government ? We do not, as even the Spectator declares we do, worship the piece of paper called the Constitution. We believe that our Constitution was wisely made, that the men who made it accomplished more with limited means and under very straitened circumstances than has ever been accomplished by any other one body of statesmen of whose doings there is record. We believe that their work is as nearly perfect as it could have been made at their time by any wisdom which has yet manifested itself in the conduct of human affairs. But it is not perfect, it has defects, among which the chief is an excess of inflexibility ; and these we hope in some way or other to remedy, yet with reverent and cautious hands. We do not worship our Constitution, but we do politically worship constitutional govern- ment. And in our eyes constitutional government is at an end if the provisions of a constitution, whatever they may be, can be set at naught by the mere wish, or upon the convictions of right, of a majority. Our constitutions are the protections of our minorities against the tyranny of majorities. Every State has its written constitution, which is as binding upon its legislature as that of the Union is upon Congress, and the disregard of which would make a law passed unanimously by the legislature utterly void. In New York we have conventions once in twenty years for such amendment of the Constitution as it may seem to need, but once amended, it is absolute again, supreme over legisla- tive and executive power, and the one fixed element in all judicial decision. No man here can have hostile legislation sprung upon him or rights taken away which he reasonably supposed were secure, merely because the majority represented in the legislative body have changed their minds as to the justice or the policy of maintaining those rights. The Spectator is perfectly correct in say- ing in its article on its course on the Reform Bill, that "the right of the majority to autocratic power has never been established in America for an hour." It prevails neither in national affairs, nor in the smallest local legislation. The Constitution of the Union checks it in one, those of the States in the other. Those of us who study your politics can easily understand the shrinking of "Educated Liberals" from universal suffrage, or an approach to it, in a country without a fixed constitution, and in which the will of two-thirds of the legislative body is practically absolute,—which I may be pardoned for adding, although it may be a very good government, is, according to our view, a very imperfect form, to say the least, of constitutional government. For our experience sustains the Spectator's position that if the majority rules in a country without such a constitution, and that majority is composed of a single class, whatever the merits of that rule, the nation will cease to be free. And therefore, such is our devotion to constitu- tional government, that if the plan of the Committee of Fifteen were adopted by Congress, the immediate consequence would be that power would fall away from the party of progress, and the protection of the negro would be sacrificed to the freedom of the