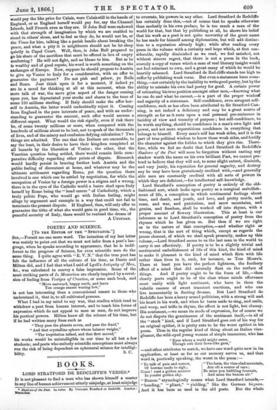 [To THE EDITOR OF THE "SPECTATOR."] Sin,—Permit me one more word. The intention of my last letter was mainly to point out that we must not infer from a poet's lan- guage, when he speaks according to appearance, that he is indif- ferent to the progress of Science, for even scientific men do the same thing. I quite agree with "B. V. N." that the true poet has felt the influence of all the culture of his time, as Dante and Milton did, and I feel that what I said of Lyell's Antiquity of Man, &c., was calculated to convey a false impression. Some of the most striking parts of In Memoriam are clearly inspired by a revul- sion of feeling from Vestiges of Creation, or some such book, and "Move eastward, happy earth, and leave

is not less interesting than a conventional sunset to those who understand it, that is, to all cultivated persons.

What I had in my mind to say was, that studies which tend to withdraw a poet from human interest, and to teach him forms of expression which do not appeal to man as man, do not improve his poetical powers. Milton knew all the science of his time, but if he had written many lines such as

"They pass the planets seven, and pass the fixed," "And that crystalline sphere whose balance weighs," "The trepidation talked, and that first moved," his works would be unintelligible in our time to all but a few students; and poets who embody scientific conceptions must always run the risk of being dependent on ephemeral science for intelligi-