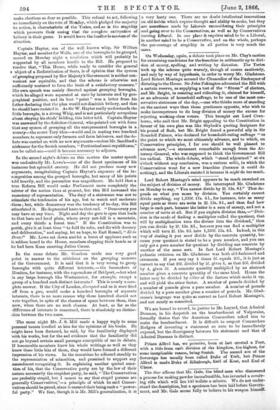 reply to sonic personal taunts levelled at him for the opinions of his books. He might have been flattered, he said, by the familiarity displayed with his works, but for the sad evidence that the familiarity did not go beyond certain small passages susceptible of use in debate. If honourable members knew his whole writings as well as they knew these little bits of them, they would have formed a different impression of his views. In the meantime he adhered steadily to the representation of minorities, and promised to support any amendment recognizing it. In explaining another quoted asser- tion of his, that the Conservative party are by the law of their nature necessarily the stupidest party, he said, "The Conservatives are probably stupid, but I meant to say that stupid persons are generally Conservatives,"—a principle of which he said Conser- vatives should be proud, duce it ensured their being such a " power- f ul party." We fear, though it is Mr. Mill's generalization, it is a very hasty one. There are no doubt intellectual innovations on old habits which require thought mid ability to make, but they are sometimes made by Liberals reconsidering their principles and going over to the Conservatives, as well as by Conservatives turning Liberal. In one Owe it requires mind to be a Liberal, in another mind to be a Conservative, and on the whole, perhaps the per-centage of stupidity in all parties is very much the same.