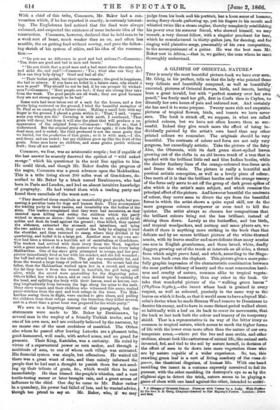 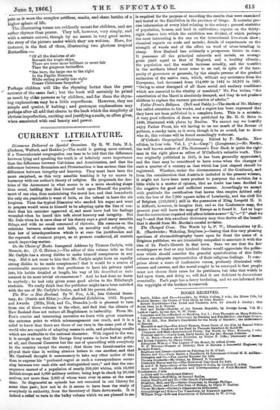 A GLIMPSE OF ORIENTAL NATURE.*

Trim is nearly the most beautiful picture-book we have ever seen- Mr. Gleig, in his preface, tells us that the lady who painted these- very delicate and beautifully composed, as well as beautifully. executed, pictures of Oriental flowers, birds, and insects, having been a great invalid, but with "perfect mastery over her own:, pencil," has freely used her gift, first in Corfu then in Ceylon, to diversify her own hours of pain and enforced rest. And certainly she has used it to some purpose. Twenty more rich and exquisite pictures of tropical flowers, birds, and insects we have never- seen. The book is struck off, we suppose, in what are called printed colours, but we have not often known them so suc- cessful. Indeed they give much more the effect of being in- dividually painted by the artist's own hand than any other. printed colours we remember. The originals should be very- beautiful. The contrasts of colour and form are not only very gorgeous, but exceedingly artistic. Take the picture of the fairy Aloe, the Oberonia, with its dark green short-spiked leaves growing out of the clefts in an old brown trunk of a tree that is. specked with the brilliant little red and blue Indian beetles, while- the slender feathery lines of the orange-coloured tree-ferns arch and frame the whole. The picture is really a beautiful and poetical artistic conception, as well as a lovely piece of colter. One merit of it is that the brilliant beetles and the orange tram of the ferns only serve to set off the group of dark green spikes of aloe which is the artist's main subject, and which remains the principal effect of the picture. And however beautiful the contrasts of colour, they never seem to divert the eye from the beautiful forms in which the artist shows a quite equal skill, nor do the: more gorgeous colours overpower or even tend to kill the quieter. The artist always so chooses her compositions that the brilliant colours bring out the less brilliant, instead of shining them down. Lovely as the butterflies, and bee birds, and tropical woodpeckers, and nutmeg and mace plants are, we- doubt if there is anything more striking in the book than that delicate and by no means brilliant picture of the white-thorrrecl acacia, with its leaves smaller and more delicate than many acacias one seas in English greenhouses, and those broad, white, deadly daggers growing out of the trunk at intervals on all sides, a thrust from which might prove fatal, and which, according to the Singe- lese, turn back even the elephant. This picture gives a more pain- fully graphic impression of the characteristic combination betweem the most perfect delicacy of beauty and the most remorseless hard- ness and cruelty of nature, common alike to tropical vegeta- tion and tropical humanity, than any other in the book. Or- take that wonderful picture of the "walking green leaves" (Phyllium Scythe),—the insect whose back is grained in every respect, as well as coloured, precisely in the same way as the leaves on which it feeds, so that it would seem to have adopted Mal- colm's device when he made Birnam Wood remove to Dansinane to deceive his enemy, and to have in some distant period walked about so habitually with a leaf on its back to cover its movements, that the back at last took both the colour and tracery of its temporary shield. That is a representative in its way of the bitter irony so- common in tropical nature, which seems to mock the higher forms. of life with the lower even more often than the nature of our owa temperate zones,—where yet the bee and man orchis, and other orchises, almost look like caricatures of animal life, like animal serfs. invented, fed, and tied to the soil by nature herself, in derision of the effort of man to tie down into mere vegetation those who are by nature capable of a wider experience. So, too, this crawling green leaf is a sort of living mockery of the ruses de guerre, the theatrical disguises, of human life. With one hand moulding the insect in a costume expressly conceived to foil ita pursuer, with the other moulding its destroyer's eye so as by the- slightest sign to detect the trick, nature seems to be playing a game of chess with one hand against the other, intended to antici- • A Glimpse of Oriental Nature. Pictures with Verses by a Lady. With Prateca by the itev. S. B. °big, Chsplain-Cteneral to ilor Majesty's Forces. London : Dean aud Son.

pate as it were-the complex artifices, masks, and sham battles of a higher sphere of life. The illustrating verses are evidently meant for children, and are

rather rhymes than poems. They tell, however, very simply, and with a certain naivete, though by no means in very good metre, the story of the picture under which they- are mitten. Here, for instance, is the first of them, illustrating two glorious tropical -Butterflies :— " Of all the denizens of air Beneath the tropic skies,

There are none more brilliant or more fair Than the gorgeous butterflies.

" See here, the large one to the right Is the Papilio Memnon,

Perhaps children will like the rhyming better than the prose account of the same fact ; but the book will certainly be prized as much by older persons as by children, and for them the rhym- ing explanations may be a little superfluous. However, they are simple and quaint, if halting ; and grotesque explanations may perhaps after all add that charm to the book which the simplicity of obvious imperfection, exciting and justifying a smile, so often gives, when associated with real beauty and power.