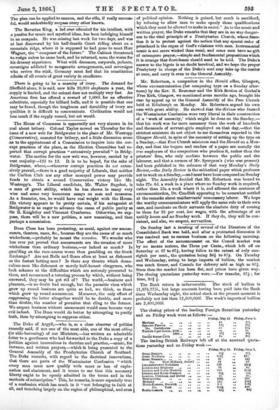 Mr. Robertson, a compositor in the Herald office, Glasgow, whose

excommunication (for composing type oa a Sunday after- noon) by the Rev. R. Bremmer and the Kirk Session of Gorbal's Free Kirk, Glasgow, we mentioned some months ago, brought his case by appeal up to the General Assembly of the Free Church held at Edinburgh on Monday. Mr. Robertson argued his own case with great ability. He showed that the divines who framed the Westminster Confession were very liberal in their construction of a work of necessity,' which might be done on the Sunday,— that his work was far more necessary than the work of hundreds and thousands of servant-girls employed on that day,---that the strictest ministers do not object to see themselves reported in the Glasgow Herald, in spite of the necessity of setting up the type on a Sunday,—that Free Church ministers read the Herald on a Mon- day, and that the buyers and readers of a paper are morally the true employers of the compositors who produce it, rather than the printers' firm, who only mediate between the public and the labourer, and that a sermon of Mr. Spurgeon's (who was present) had been published in the columns of that very Monday's Daily Review,—the Daily Review is the sabbatical paper which professes not to work on a Srmday,—and must have been composed on Sunday night. The Assembly decided that Mr. Robertson was bound to take 27s. fid. a week in a place where no Sunday work is required, rather than 35s. a week where it is, and affirmed the sentence of excommunication, Dr. Candlish appearing to be somewhat nettled at the remarks about maidservants' unnecessary labour. We hope the worthy excommunicators will apply the same rule to their own case, and inculcate on their servants the absolute duty of coming to them for 25 per cent. less wages, with the advantage of an untidy house and no Sunday work. If they do, they will be con- sistent, and also, we suspect, Bervantless.