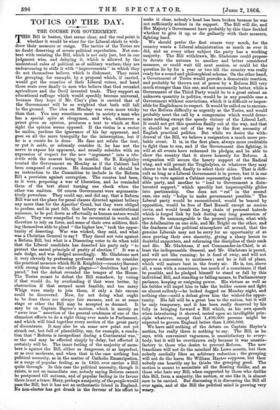 THE COURSE FOR GOVERNMENT.

THIS Bill is beaten, that seems clear, and the real point is whether it would be wiser for the Liberal chiefs to with- draw their measure or resign. The tactics of the Tories are no doubt deserving of severe political reprobation. Not con- tent with resisting the Bill, which is not only just, but in our judgment wise, and delaying it, which is allowed by the understood rules of political as of military warfare; they are endeavouring to stifle it with "improvements" in which they do not themselves believe, which is dishonest. They resist the grouping, for example, by a proposal which, if carried, would gut the counties of their Liberal voters, and hand those seats over finally to men who believe that God revealed agriculture and the Devil invented trade. They support an educational suffrage which would speedily become universal, because they hope if Mr. Clay's plan is carried that of the Government will be so weighted that both will fall to the ground. The idea on Monday was even more tricky than that. You may sometimes meet in society a man who has a special spite at clergymen, and who, whenever a priest gives an opinion, produces a text to which at first sight the opinion seems opposed. If the victim is a rector he smiles, pardons the ignorance of his lay opponent, and goes on all the more tranquilly for the interruption, but if he is a curate he is done. He dare not refute the text, or put it aside, or solemnly consider it, he has not the nerve to expose his opponent, and usually subsides with an expression of respect for the new " argument " into a ate- a-ate with the nearest being in muslin. Sir R. Knightley treated the Government on Monday as if the Cabinet had been composed of curates. He demanded that it should be an instruction to the Committee to include in the Reform Bill a provision against corruption. The curates had been, as it were, proposing a war of liberation, and he reminded them of the text about turning one cheek when the other was smitten. Of course Government were argumenta- tively powerless. They could say, and did say, that a Reform Bill was not the place for penal clauses directed against bribery any more than for the Apostles' Creed, but they were obliged to profess, and in part felt, that bribery was a constitutional nuisance, to be put down as effectually as human nature would allow. They were compelled to be reverential in words, and therefore to rely on force, and some of their own soldiers, find- ing themselves able to plead "the higher law," took the oppor- tunity of deserting. War was wicked, they said, and what was a Christian General to say ? They dared not vote against a Reform Bill, but what is a Dissenting voter to do when told that the Liberal candidate has deserted his party only "to protect the sacred principle of purity of election ?" It was a safe dodge, and was dodged accordingly. Mr. Gladstone met it very cleverly by professing profound readiness to consider the practical measure which Sir R. Knightley—country Baronet with strong ideas on the cattle plague—" doubtless had pre- pared," but the defeat revealed the temper of the House. The Tories meant to defeat the Bill somehow, by voting if that would do, by overloading if that were better, by obstruction if that seemed most feasible, and too many Whigs were ready to join them, if only a fair excuse could be discovered. Now, for not doing what ought to be done there are always fair excuses, and so at some stage or other the Bill may be accepted as doomed. It may be on Captain Hayter's motion, which is merely an " owre true" assertion of the general crudeness of one of the clumsiest efforts to do a right thing ever made in Parliament, and which will bind together every section of the great party of discontents. It may also be on some new point not yet struck out, but full of plausibility, say, for example, a resolu- tion that "Reform is inexpedient during a Continental war," or the end may be effected simply by delay, but effected it certainly will be. The inner feeling of the majority of mem- bers is against the Bill, either as dangerous, or as imperfect, or as over moderate, and when that is the case nothing but political necessity, as in the matter of Catholic Emancipation, or a surge of popular feeling, as in 1830, ever carries a Bill quite through. In this case the political necessity, though it exists, is not an immediate one, nobody saying Reform cannot be postponed till autumn, and of popular feeling in its favour there is not a trace. Many, perhaps amajority, of the people would pass the Bill, but it has not an enthusiastic friend in England. No non-elector has got drunk in the fervour of his effort to

make it clear, nobody's head has been broken because he wax not sufficiently ardent in its support. The Bill will die, and Her Majesty's Government have probably by this time decided whether to give it up, or die gallantly with their measure,. fighting hard.

We should prefer the first course very much, for the country wants a Liberal administration as much as ever it did, and on every other subject the party has a working majority. The Bill withdrawn, Mr. Gladstone could propose to devote the autumn to another and better considered measure, or could wait till next session, or could let the question lie by for a year or two till the country was really ready for a sound and philosophical scheme. On the other hand,. a Government of Tories would provoke a democratic reaction, and probably be thrown out of power by s Reform Bill very much stronger than this one, and not necessarily better, while I Government of the Third Party would be to a great extent an unknown quantity in politics, would be in any possible case a Government without convictions, which it is difficult or impos- sible for Englishmen to respect. It would be called on to encoun- ter the Reform difficulty as urgently as the Tories, and would probably meet the call by a compromise which would deter- mine nothing except the speedy victory of the Liberal Left. It could not get this question finally out of the way, and that it should be got out of the way is the first necessity of English practical politics. But while we desire the with- drawal of the Bill, we believe a resignation a much more pro- bable event. It is, in the first place, always more creditable. to fight than to run, and if the Government dies fighting, it will at all events have redeemed its pledges, and be able to. showthe country that it strove honestly for Reform. A resignation will secure the hearty support of the Radical wing, and will permit the Troglodytes, or whatever they may choose to be called, finally to select their sides. That is diffi- cult as long as a Liberal Government is in power, bat it is one thing to vote against a Cabinet representing their own osten- sible party, and another to "lend to Government a disin- terested support," which speedily but imperceptibly glides into partizanship. One does not "rat" in the second case, one only "helps to make government possible." The Liberal party would be reconstituted, would be braced by opposition, would be free of Earl Russell except as amicus- curice, and would break the long chain of personal hatreds which is forged link by link during any long possession of power. So unmanageable is the present position, what with- the Adullamites on one side, and Mr. Bright on the other, and the deadness of the political atmosphere all around, that the genuine Liberals may not be sorry for an opportunity of at. once proving their own sincerity, giving a sharp lesson to. doubtful supporters, and reforming the discipline of their rank. and file. Mr. Gladstone, if not Commander-in-Chief, is at least the indispensable General, and Mr. Gladstone is proud, and will not like running; he is fond of sway, and will not approve a concession to mutineers ; and he is full of plans, which will mature best in the frosty air. He is, too, above all, a man with a conscience, too much of a conscience, if that be possible, and he pledged himself to stand or fall by this individual Bill, and standing or falling means, in Parliamentary parlance, keeping or resigning power. His virtues as well as his foibles will impel him to take the bolder course and fight on almost sullenly—he looked dogged on Monday night, and nothing else—until a defeat gives him the wished-for oppor- tunity. His fall will be a great loss to the nation, but it will be only temporary, and it has been really deserved by his folly in bringing forward a Bill which, as his own speech when introducing it showed, rested upon no intelligible prin- ciple whatever, except that 1,400,000 persons might be expected to govern England better than 1,000,000. We have said nothing of the debate on Captain Hayter's motion, for really there is nothing to say. The Bill, as he says, with convenient vagueness, is unsatisfactory to every- body, but it will be overthrown only because it was unsatis- factory to those who desire to prevent Reform. The new franchises will not do the mischief Mr. Lowe asserts, but then nobody cordially likes an arbitrary reduction ; the grouping will not do the harm Sir William Hayter supposes, but then nobody can heartily say he thinks the grouping good. The motion is meant to assimilate all the floating dislike, and as those who hate any Bill, when supported by those who dislike this Bill, form a majority, the motion, or one like it, is almost sure to be carried. But discussing it is discussing the Bill all over again, and of the Bill the political mind is growing very weary.