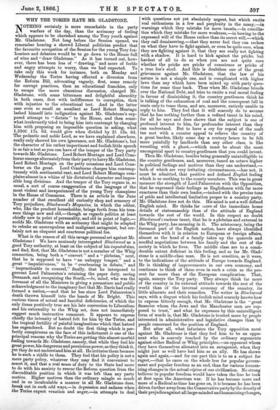 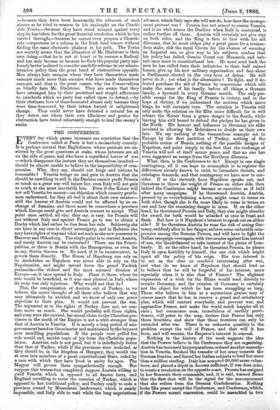 WHY THE TORIES HATE MR. GLADSTONE.

NOTHING certainly is more remarkable in the party

warfare of the day, than the acrimony of feeling which appears to be cherished among the Tory youth against Mr. Gladstone. Not long before the Session opened, we remember hearing a shrewd Liberal politician predict that the favourite occupation of the Session for the young Tory fox- hunters and debaters would be to go down to the House full of wine and "draw Gladstone." As it has turned out, how- ever, there has been less of "drawing," and more of feeble and angry attempts to worry, than we had expected. To take only this week for instance, both on Monday and Wednesday the Tories having effected a diversion from the Reform Bill, advocating vaguely, first, some remedy for corrupt practices, then an educational franchise, only to escape the more obnoxious discussion, charged Mr. Gladstone, with some bitterness and delightful absurdity in both cases, first with indifference to corruption, then with injustice to the educational test. And in the latter case even so small an assailant as Lord Robert Montagu lashed himself into indignation against Mr. Gladstone's sup- posed attempt to " dictate " to the House, and then some- what irrelevantly tried to bring him into contempt by charging Um with proposing an impossible question in asking, what 1,330/. 17s. 6c1. would give when divided by 2/. 13s. 8d. -The pedantic and noble Lord, as we have explained elsewhere, really only showed his own ignorance, not Mr. Gladstone's, but the character of his rather impertinent and foolish little speech is as fair a test as you can have of the temper of the Tory party towards Mr. Gladstone. Lord Robert Montagu and Lord Cran- borne emerge alternately from their party to harry Mr. Gladstone, Lord Robert Montagu on the petty occasions and Lord Oran- borne on the great. Lord Cranborne charges him contemp- tuously with sentimental rant, and Lord Robert Montagu com- plains almost in a whine of his dictatorial character and impos- sible long divisions. And the temper of the Tory organs is, as usual, a sort of coarse exaggeration of the language of the most violent and inexperienced of the young Tory champions in the House of Commons. There is an article in the June number of that excellent old curiosity shop and armoury of -Tory prejudices, Blackwood's Magazine, in which the editor, who, like the prudent householder, brings forth from his trea- sure things new and old,—though as regards politics at least chiefly new in point of personality, and old in point of logic,— scolds Mr. Gladstone with an acrimony that might be adapted to rebuke an unscrupulous and malignant antagonist, but cer- tainly not an eloquent and courteous political foe.

What is the reason of all this savage personal set against Mr. Gladstone f We have anxiously interrogated Blackwood as a good Tory authority, at least on the subject of his imputed sins, and find, first, that Mr. Gladstone is not a member of the Whig connection, being both a " convert " and a "plebeian," next, that he is supposed to have "an unhappy temper," and a great "impulsiveness," to be "overbearing in debate," and "impracticable in counsel," finally, that he interposed to prevent Lord Palmerston's retaining the paper duty, saving Denmark, and recognizing the South,—he, mind, who was the foremost of all the Ministers in giving a premature and public acknowledgment to the imaginary fact that Mr. Davis had really formed a nation,—and that he has since Lord Palmerston's death thrown himself into the hands of Mr. Bright. This curious tissue of actual and fanciful deficiencies, of which the only items positively true are his late conversion to Liberalism and his externality to the Whig set, does not immediately -suggest much instructive comment. It appears to express ,chiefly the intensity of hatred felt for him by the Tories, and the tropical fertility of painful imaginations which that hatred has engendered. But no doubt the first thing which is per- fectly conspicuous on the face of this indictment is one of the principal reasons why the Tories are getting this almost morbid feeling towards Mr. Gladstone, namely, that while they feel his great power, his dangerous and pernicious power, as they think it, yet they do not understand him at all. He irritates them because he is such a riddle to them. They feel that his policy is not a mere party policy, whatever they may find it convenient to -assert it, and that a real sense of duty to the State had more to do with his anxiety to rescue the Reform question from the discreditable position in which it was left than any party motive. Higher motives than the ordinary mingle so much and in so incalculable a manner in all Mr. Gladstone does, break out in such odd ways,—in depression and sadness when the Tories expect vexation and anger,—in attempts to deal with questions not yet absolutely urgent, but which excite real enthusiasm in a few and perplexity in the many,—in warnings which they mistake for mere taunts,—in concilia- tion which they mistake for mere weakness,—in bowing to the expressed will of the House rather than its secret will,—which they call domineering,—that they never feel they can reckon on what they have to fight against, or even be quite sure, when they are fighting against it, that they are really not fighting with a shadow. It is hard to kick against the pricks, but hardest of all to do so when you are not quite sure whether the pricks are pricks of conscience or pricks of a true foe's steel. And this is doubtless one of the great grievances against Mr. Gladstone, that the law of his nature is not a simple one, and is complicated with higher laws than any which have been mixed up with party ques- tions for some time back. Thus when Mr. Gladstone broods over the National Debt, and tries to excite a real moral feeling in favour of diminishing it, the country gentlemen think he is talking of the exhaustion of coal and the consequent fall in rents only to tease them, and are, moreover, entirely unable to reply to him. They feel that it will scarcely do to assume that he has nothing further than a refined taunt in his mind, for all he says and does shows that the subject is one of profound interest to him, far profounder interest than they can understand. But to have a cry for repeal of the malt tax met with a counter appeal to relieve the country of a great burden, likely some day a century hence to be felt more painfully by landlords than any other class, is like wrestling with a ghost,—which must be about the most uncongenial sport to country gentlemen that you could invent.

Then Mr. Gladstone, besides being generally unintelligible to the country gentlemen, and, moreover, tuned an octave higher in political feelings and motives than they can understand,— both of which are very irritating circumstances,—has not, it must be admitted, that positive and defined English feeling which is so soothing to the county members. This was in great measure the strength of Lord Palmerston with the Opposition, that he expressed their feelings as Englishmen with far more exactness than their own leader,—indeed with the precise tone of pride and intellectual limitation proper to a country party. Mr. Gladstone does not do this. His mind is not a well defined English mind. He thinks far more of the immediate home details of statesmanship than of the attitude of England towards the rest of the world. In this respect no doubt Blackwood's curious taunt, that he is a plebeian and external to the Whig party, has meaning in it. The aristocracy, being the foremost part of the English nation, have always identified themselves with it in relation to European or foreign affairs, almost as the head of a family takes up the quarrels and needful negotiations between his family and the rest of the society in which he lives. The middle class are to a consi- derable extent deficient in this feeling, and so far Mr. Glad: stone is a middle-class man. He is not sensitive, as it were, to the indications of the attitude of Europe towards England. He is thinking of improvements in our own economy, and continues to think of them even in such a crisis as the pre- sent far more than of the European complication. That, again, annoys the Tory party. They always think far more of the country in its external attitude towards the rest of the world than of the internal economy of the country, its little ailments and their remedies. The writer in Blackwood says, with a disgust which his foolish mind scarcely knows how to express bitterly enough, that Mr. Gladstone is the "great financier whom the Jews and the Manchester men are sup- posed to trust," and what he expresses by this unintelligent form of words is, that Mr. Gladstone is trusted more by people interested in administrative and legislative changes than by people concerned for the position of England. But after all, what infuriates the Tory opposition most against Mr. Gladstone is that they feel him to be an oppo- nent who is scarcely touched by the ordinary arguments against either Radical or Whig principles,—an opponent whom they have themselves alienated into an antagonist, when they might just as well have had him as an ally. He has shown again and again,—and for our part this is to us a subject for regret,—that he cares on the whole less for popular govern- ment and popular freedom as an end, than for various human- izing changes in the actual regime of our civilization. No strong believer in popular freedom would have taken the line he took at first upon the American war. If he has become more and more of a Radical as time has gone on, it is because he has been driven further away from the Conservative party by the density of their prej adice against all large-minded and humanizing changes, —because they have been incessantly the advocate of such abuses as he tried to remove in his onslaught on the Charit- able Trusts,—because they have stood arrayed against every step he has taken for the great financial revolution which he has carried through,—because he cannot even propose a Church- rate compromise or a reform in the Irish land tenure without finding the same obstinate phalanx in his path. The Tories are secretly aware that the alienation of Mr. Gladstone is their own doing,—that he is not at heart or by essence a Radical, and has only become so because he finds the popular party uni- formlybetter inclined to consider candidlyreforms in our admin- istrative policy than the great band of obstructives opposite. Men always hate enemies whom they have themselves made enemies much more than enemies who have made themselves enemies, and that is the great reason why the Conservatives so blindly hate Mr. Gladstone. They are aware that they have estranged him by their persistent and stupid adherence to mischiefs which no party was called upon to defend,—by their obstinate love of time-honoured abuses only because they were time-honoured, by their inborn hatred of enlightened change. They could never have detested a natural foe as they detest one whom their own blindness and genius for obstruction have forced reluctantly enough to lead the enemy's ?alike