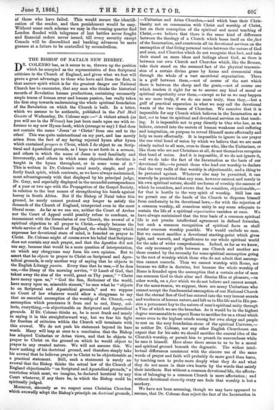 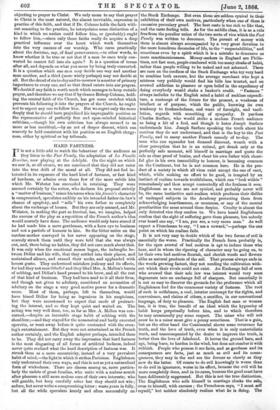 THE BISHOP OF NATAL'S NEW HERESY.

DR. COLENSO has, as it seems to us, thrown up the position which he occupied as the representative of free Scriptural criticism in the Church of England, and given what we fear will prove a great advantage to those who have said from the first, in that narrow spirit which is far the greatest danger our National Church has to encounter, that any man who thinks the historical records of Revelation human productions, containing necessarily ample traces of human error and human passion, has really taken the first step towards undermining the whole spiritual foundation of the Revelation on which the Church is built. In a letter, which we assume to be authentic, published in the Pall Mall Gazette of Wednesday, Dr. Colenso says :—" A violent attack (as you will see in the Witness) has just been made upon me with re- ference to my new Hymn-book, which (strange to say) I find does not contain the name ' Jesus ' or 'Christ from one end to the other: This was quite unintentional on my part, and has merely arisen from the fact of my having rejected hymn after hymn which contained prayers to Christ, which I do object to on Scrip- tural and Apostolical grounds, as I hope to set forth in a sermon, and others in which the name of Jesus is used familiarly and irreverently, and others in which some objectionable doctrine is taught in the hymn throughout, or in some verse of it." This is written in Dr. Colenso's usual manly, simple, and per- fectly frank spirit, which contrasts, as we have always maintained, most advantageously with that displayed by his principal judge, Dr. Gray, and especially displayed in the uncandid correspondence of a year or two ago with the Propagation of the Gospel Society, in relation to the best means of strengthening his hands against heresy in South Africa. But if the Bishop of Natal takes this ground, he surely cannot pretend any longer to satisfy the demands of the Church of England, interpreted even in the most liberal sense. As far as we can see, neither the Court of Arches nor the Court of Appeal could possibly refuse to condemn, as inconsistent with the formularies of our Church, the avowal of a spiritual objection to all prayer to Christ,—simply because the whole service of the Church of England, the whole liturgy which expresses her devotional state of mind, is founded on prayer to Christ. Dr. Colenso might of course avow his belief that Scripture does not contain any such prayer, and that the Apostles did not use any, because that would be a mere question of interpretation, on which any clergyman may form his own opinion. But to assert that he objects to prayer to Christ on Scriptural and Apos- tolical grounds, is only another way of saying that he objects to the English Liturgy passim. Every time that he uses,—if he does use,—the litany of the morning service, "0 Lamb of God, that takest away the sins of the world, grant us Thy peace," "Christ have mercy upon us," "God the Son, Redeemer of the world, have mercy upon us, miserable sinners," he uses what he "objects to on Scriptural and Apostolical grounds," and we suppose no Court of law whatever would allow a clergyman to say that an essential assumption of the worship of the Church,—au assumption which penetrates it from end to end, litany, col- lects, everything,--is objectionable on Scriptural and Apostolical grounds. If Dr. Colenso thinks so, he is most frank and manly in saying it in this straightforward way, but we fear his fight for freedom of criticism within the Church will terminate with this avowal. We do not push his statement beyond its bare words. Many will leap at once to a conclusion that the Bishop has adopted Unitarian or Arian views, and that he objects to prayer to Christ on the ground on which he would object to prayer to any created nature. We will not assume this. We know nothing of his doctrinal ground, and therefore simply take his avowal that he believes prayer to Christ to be objectionable as a practical statement. Still, such a statement is surely an avowal that the Bishop thinks the actual law of the Church of England objectionable "on Scriptural and Apostolical grounds," a conviction which must, we imagine, be declared heretical by any Court whatever, if any there be, in which the Bishop could be spiritually judged.

Moreover, sincerely as we respect some Christian Churches which avowedly adopt the Bishop's principle on doctrinal grounds, —Unitarian and Arian Churches,—and which base their Chris- tianity not on communion with Christ and worship of Christ, but on their conception of the spiritual and moral teaching of Christ,—we believe that there is the same kind of difference between the theology of a Church which bases itself on the fact of the Incarnation, and constructs all its devotional services on the assumption of that living personal union between the nature of God and man, and Churches which do not recognize that fact, and take their stand on mere ideas and feelings about God, as there is between our own Church and Churches which, like the Roman, take their stand on the assumed fact of the physical transmis- sion of a certain divine grace by forms and ceremonial rites through the whole of a vast sacerdotal organization. There is a gulf between them,—not of course of the sort which there is between the sheep and the goats,—not of course one which renders it right for us to assume any kind of moral or spiritual superiority over them,—except so far as we may happen to see more truly, if we do see more truly, than they,—but a gulf of practical separation in what we may call the devotional wants of the two classes of Churches. We conceive that it is impossible for any Church which believes in the Incarnation as a fact, not to base its spiritual and devotional services on that teach-

closely united to all men, even to those who, like the Unitarians, or like those who are not Christians at all, do not themselves recognize that bond of union. And it is impossible, if we do not ignore it, —if we do take the fact of the Incarnation as the basis of our devotional life,—to permit those who lead our worship to declare that the very radix of that worship is objectionable, and a thing to be protested against. Whatever else may be permitted, it can scarcely be permitted that any man, however earnest and manly in his own spiritual nature, should use forms of worship the essence of which he considers, and avows that he considers, objectionable,—

for that is hostile to the very spirit of worship. Still less can we permit one of the heads of the Church to dispense himself

from conformity to its devotional laws,—for with the rejection of a common worship, all conscious unity in any sense adequate to sustain the life of a spiritual organization vanishes at once. We. have always maintained that the true basis of a common spiritual life is not precise intellectual agreement in defined formulas, but such a common recognition of spiritual facts as shall render common worship possible. We would exclude no man. But we cannot sacrifice a devotional starting-point which gives light, and warmth, and significance to our whole spiritual world for the sake of wider comprehension. Indeed, as far as we know, the only necessary gulfs between one Church and another are those created by the necessity for some spiritual assumption going to the root of worship which those who do not admit that assump- tion cannot concede. Thus we cannot worship with Rome, not because we differ in doctrine, but because the whole worship of Rome is founded upon the assumption that a certain order of men can summon God to their altar and dismiss Him at pleasure, —in other words, on a fact which we do not believe and cannot accept. For the same reason, we suppose, there are many Unitarians who cannot accept the fundamental assumption of our National Church that the eternal Son of God has entered into the very inmost secrets and weakness of human nature, and left us in His life and in His pas- sion a permanent key to the nature of man's spiritual unity through a Vine of which we are the branches. As it would be in the highest degree unreasonable to expect Rome to sacrifice for us a ritual which seems even to the highest minds among her own clergy and people to rest on the very foundation-stone of the spiritual Universe,— so neither Dr. Colenso, nor any other English Churchman can expect that for his sake we should sacrifice the central idea of the Church's worship, or permit him to preach its unsoundness while he uses it himself. Here alone there seems to us to be a moral and spiritual ground beneath the dogmatic. The widest intel- lectual differences consistent with the sincere use of the same words of prayer and faith will probably do more good than harm, by teaching men to probe more deeply what they do and what they do not mean in their own hearts by the words that satisfy their intellects. But without a common devotional life, the affecta- tion of belonging to a common Church is mere affectation ; and without devotional sincerity every one feels that worship is but a mockery.

We have not been assuming, though we may have appeared to assume, that Dr. Colenso does reject the fact of the Incarnation in objecting to prayer to Christ. We only mean to say that prayer to Christ is the most natural, the almost inevitable, expression in practice of this faith, and that if Dr. Colenso holds the faith with- out assenting to the practice, he interpolates some distinction of .a kind in which no nation could follow him, or (probably) ought to follow him,—since only those faiths really do acquire a deep practical influence over the heart which work themselves into the very essence of our worship. Who cares practically about the doctrine, say, of final perseverance,—in other words, to know whether it be trim or not that if a man be once truly con- verted he cannot fall into sin again ? It is a question of terms after all, and depends on what you mean by being truly converted. It is a question which one man may decide one way and another man another, and a third (more wisely perhaps) may not decide at all. But the dread of sin to-dayand to-morrow is smatter of primary importance to every one, and so that dread enters into our prayers. We doubt if any faith is worth much which manages to keep outside prayer, and therefore we say that if by chance Bishop Coleus°, hold- ing the central faith of the Church, has got some crotchet which prevents his following it into the prayers of the Church, he ought not to expect any one to follow him. But we regret only the more deeply that he should have prejudiced his impregnable position as the representative of perfectly free and open-minded historical criticism,—though his own criticism has always seemed to us more or less uncritical,—by an act of deeper dissent, which can scarcely be held consistent with his position as an English clergy- man, either by spiritual or lay tribunals.