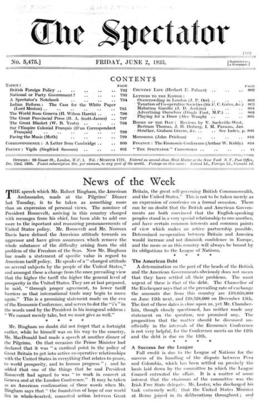 • Mr. Bingham no doubt did not forget that a

fortnight earlier, while he himself was on his way to the country, Mr. MacDonald had made a speech at another dinner of the Pilgrims. On that occasion the Prime Minister had declared that it was "a cardinal point in the policy of Great Britain to get into active co-operative relationships with the United States in everything that relates to peace, to world prosperity, and to human progress " ; and he added that one of the things that he and President Roosevelt had agreed to was "to work in concert at Geneva and at the London Conference." It may be taken as an American confirmation of these words when Me. Bingham says that " the foundation of hope of our world lies in whole-hearted, concerted action between Great Britain, the great self-governing British Commonwealth, and the United States." This is not to be taken merely as an expression of courtesies on a formal occasion. There can be no doubt that the British and American Govern- ments are both convinced that the English-speaking peoples stand in a very special relationship to one another, and have certain common interests and common points of view which makes an active partnership possible. Determined co-operation between Britain and America would increase and not diminish confidence in Europe, and the more so as this country will always be bound by its obligations to the League of Nations.