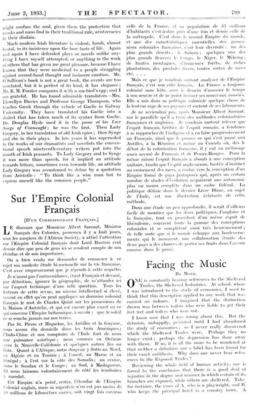 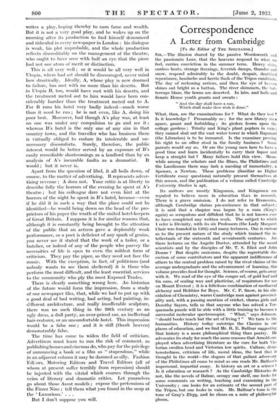 ONE is constantly bearing references to the Sheltered Trades, the Sheltered Industries. At school, where I was introduced to the study of economies, I used to think that this description applied to any work that was carried on indoors. I imagined that the distinction drawn was between toilers who were liable to get their feet wet and toilers who were not.

I know now that I was wrong about. this. But the delusion, unhappily, persisted until I had abandoned the study of economies ; so I never really discovered which the Sheltered Trades were. Perhaps they no longer exist ; perhaps the depression has done away with them. If so, it is all the more to be wondered at that neither a definition nor a label has been found for their exact antithesis. Why does one never hear refer- ences to the Exposed Trades ?

Reviewing the whole field of human activity, one is forced to the conclusion that there is a good deal of injustice in the degree and manner in which certain of its branches are exposed, while others arc sheltered, Take. for instance, the eases of A, who is a playwright, and B, who keeps the principal hotel in a country town. A writes a play, hoping thereby to earn fame and wealth. But it is not a very good play, and he wakes up on the morning after its production to find himself denounced and ridiculed in every newspaper in London: his dialogue is weak, his plot improbable, and the whole production reflects discreditably on the management of the theatre, who ought to have seen with half an eye that the piece had not one atom of merit or distinction.

This is all very well ; or it would be all very well in Utopia, where bad art should be discouraged, never mind how drastically. Ideally, A, whose play is now doomed to failure, has met with no more than his deserts. But in Utopia B, too, would have met with his deserts, and the treatment meted out to him would have been con- siderably harsher than the treatment meted out to At For B runs his hotel very badly indeed—much worse than it need be run ; he is not even, like A, doing his poor best. Moreover, bad though A's play was, at least no one was under any compulsion to go and see it ; whereas B's hotel is the only one of any size in that country town, and the traveller who has business there is virtually obliged to endure its intolerable and un- necessary discomforts. Surely, therefore, the public interest would be better served by an exposure of B's easily remediable shortcomings as a landlord than by an analysis of A's incurable faults as a dramatist. It would ; but it never is.

Apart from the question of libel, it all boils down, of course, to the matter of advertising. B represents adver- tising revenue ; A does not. Your critic is at liberty to describe fully the horrors of the evening he spent at A's theatre ; but his colleague dare not even hint at the horrors of the night he spent in B's hotel, because—even if he did it in such a way that the place could not be identified—he would bring down on the head of the pro- prietors of his paper the wrath of the united hotel-keepers of Great Britain. I suppose it is for similar reasons that, although it is constantly being brought to the attention of the public that an actress gave a deplorably weak performance, or a poet is deficient of any spark of genius, you never see it stated that the work of a tailor, or a butcher, or indeed of any of the people who purvey the necessities of life is open to even the mildest form of criticism. They pay the piper, so they need not face the music. With the exception, in fact, of politicians (and nobody wants - to see -theni sheltered) it is those who perform the most difficult, and the least essential, services to the community who, ply the most Exposed Trades.

There is clearly something wrong here. An historian of the future would form the impression, from a study of our newspaper ffies, that, while we had to put up with a good deal of bad writing, bad acting, bad painting, in- different architecture, and really insufferable sculpture, there was no such thing in the 20th century as an ugly dress, a dull party, an over-priced car, an ineffectual hair-restorer, or an uncomfortable hotel. This impression would be a false one ; and it is still (thank heaven) demonstrably false.

The time has come to widen the field of criticism. Advertisers must learn to run the risk of comment, as publishing houses and cinemas do, who pay for the privilege of announcing a book or a film as "stupendous," while in an adjacent column it may be damned as silly. Fashion FdLors, Motoring Editors and Travel Editors (all of whom at present suffer terribly from repression) should be injected with the vitriol which courses through the veins of literary and dramatic critics. Let yourselves go about those Ascot models ; expose the pretensions of the Fizzer Nine ; tell them what you found in the soup at the Luxurious.' . . .

But I don't suppose you will.