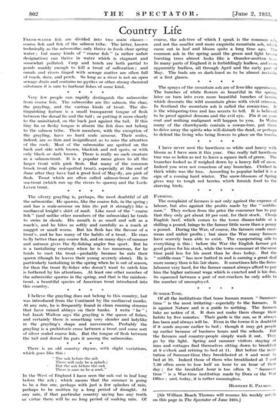 Very few people can rapidly distinguish the salmonidae from coarse

fish. The salmonidae are the salmon, the char, the grayling, and the various kinds of trout. The dis- tinguishing feature is a small transparent tongue of flesh between the dorsal fin and the tail ; or putting it more clearly to the uninitiated, on the back just against the tail. If this tiny fin or fleshy tongue is absent the fish does not belong to the salmon tribe. Their members, with the exception of the grayling, have no hard scale armour. Their scales, indeed, are so thin and insignificant as to miss the attention of the cook. Most of the salmonidae are spotted on the back and side with brown, blackish and red spots, or with only black or dark brown. There is really no such creature as a salmon-trout. It is a popular name given to all the larger trout with pink flesh. But many of the common brook trout (the red-spotted trout), especially at the end of June after they have had a good feed of May-fly, are pink of flesh. Trout which are often called salmon-trout are the sea-trout (which run up the rivers to spawn) and the Loch- Leven trout.