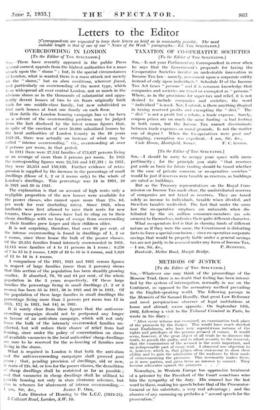 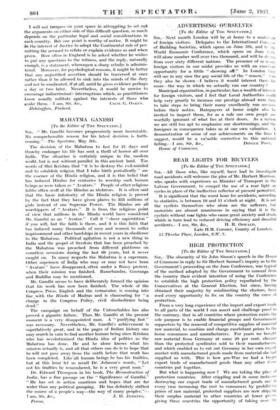 [To the Editor of TI1E SPF.CTATOR.1 S1R,—Whatever one may think of the proceedings of the Moscow Trial, there is no doubt that feeling has been intensi- fied by the system of interrogation, normally in use on the Continent, as opposed to the accusatory method prevailing in the English-speaking world. The following passage in the Memoirs of Sir Samuel Hominy, that great Law Reformer and most perspicacious observer of . legal institutions at home and abroad, seems apposite. On September 11th, 1802, following a visit to the Tribunal Crintinel in Paris, he wrote in his diary : "After every witness was examined, an examination took place of the prisoners by the Judges. This would have much shocked most Englishmen, who have very superstitious notions of the rights and privileges of the persons accused of crimes. It would seem, however, if the great object of all trials be to discover the truth, to punish the guilty, and to afford security to the innocent, that the examination of the accused is the most important, and an indispensable part of every trial. I observed one objection to it, however, which is, that judges often endeavour to show their ability and to gain the admiration of the audience by their mode of cross-examining the prisoners. This necessarily makes them, as it were parties, and gives them an interest to convict. They become advocates against the prisoners . . ."

Nowadays, in Western Europe too oppressive treatment of a prisoner by the President of the Court sometimes wins • him the sympathy of the Jury. Ills counsel has the last word to them, making his speech before that of the Procurator- General or his substitute, a very real advantage; and the absence of any summing-up preludes a" second speech for the prosecution."

I will not_treapass on your space in attempting to set :out the arguments on either side of this difficult question, so much depends on the particular legal and social considerations in each country. But one point is worthy of notice. It might be An the interest of Justice to adopt the Continental rule of per- mitting the accused to refute or explain evidence as and when given. How often in England is he asked whether he wishes to put any questions to the witness, and the reply, naturally enough, is a statement, whereupon a sharp rebuke is adminis- tered. Moreover, for psychological reasons, it might be better that any unjustified assertion should be traversed at once rather than it be allowed to sink into the minds of the Jury and not be eradicated, if at all, until he gives evidence perhaps a day or two later. Nevertheless, it would be unwise to encourage indiscriminate interruptions which, as practitioners know usually militate against the interests of those whet