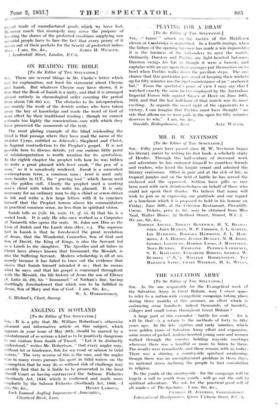 Tun SrEcTAToa.1 Sin,—" Janus' " attack on the tactics —of the Middlesex eleven at Cambridge is unjust ified. In a fourth innings, when the failure of the opening batsmen has made a win impossible,- it is the business of the Mil-enders to save the match.. Ordinarily Durston and Peebles are light-hearted ,batsmen. Durston swings his bat as though it were a brassie, and captains with an eye upon their averages put themselves on to bowl when Peebles walks down the pavilion steps. The one chance that this particular pair stood of keeping their wickets' up for fifty minutes was the rigid maintenance of an" anchored bat." From the spectator's point of view I may say that I watched exactly the same tactics employed by the Australian Imperial Forces Side against Sussex at Hove on June 10th, 1919, and that the last half-Itour of that match was its most. exciting. As regards the moral right of the opponents to a victory, I can imagine that Peebles must have thought " no side that allows me to wear pads in the open for fifty minutes deserves to win."--I am, Sir, &c., • Osvalds, Bishopsbourne, Kort. ALEC WAI-Gir.