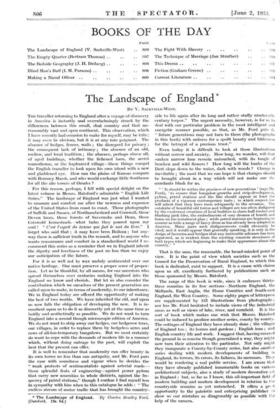 The Landscape of England*

THE traveller returning to-England after a voyage of discovery in America is instantly and overwhelmingly struck by the differences between this small, shut country and that un- reasonably vast and open continent. This observation, which I have recently had occasion to make for myself, may be trite; it may even be obvious, but it is at any rate poignant. The absence of hedges, fences, walls ; the disregard for privacy ; the consequent lack of intimacy ; the absence of an old, mellow, and local tradition ; the absence, perhaps above all, of aged buildings, whether the lichened barn, the secret manorhouse, or the haphazard village—these things compel the English traveller to look upon his own island with a new and gladdened eye. How, can the plains of Kansas compare with Romney Marsh, and who would exchange little Southease for all the silo towers of Omaha.?

For this reason, perhaps, I fell with special delight on the latest volume in Messrs. Batsford's admirable "English Life Series." The landscape of England was just what I wanted to reassure and comfort me after the newness and exposure- of the United States from coast to coast. Those photographs- of Suffolk and Sussex, of Northumberland and Cornwall, those. Devon lanes, those forests of Savernake and Dean, those Cotswold homesteads—what balm they poured upon my soil! " Cest Tespril du lecteur qui fait le sort du livre." I forget who said that ; it may have been Boileau; but any- way-there is sufficient truth in the remark, and to anyone who wants reassurance and comfort in a standardized world I re- commend this series as a reminder that we in England inherit the dignity and loveliness of the past no less than we enjoy our anticipation of the future.

For it is as well not to wax unduly sentimental over our native heritage. . One must preserve a proper sense of propor- tion. Let us be thankful, by all means, for our ancestors who spread themselves over centuries making England into the England we know and cherish.. But let us also, consider the contribution which we ourselves of the present generation are called upon to make, in terms of modernity, to ram inheritanee. We in England today are offered the opportunity of making the best of two worlds. We have -inherited the old, and upon us now falls the obligation of developing the new. It is in- cumbent upon us to do it as discreetly yet at the same time as boldly and aesthetically as possible. We do not want to turn England into a second though microscopic edition of America. We do not want to strip away our hedges, our hedgerow trees, our villages, in order to replace them by hedgeless acres and rows of all-too-temporary bungalows. But we most certainly do want to cope with the demands of modern life in a manner which, without doing outrage to the past, will exploit - the best. that the present can offer.

It is well to remember that modernity can offer beauty in its own terms no less than can antiquity, and Mr. Ford puts the case with soundness and vigour when he derides the "weak. protests of sentimentalists against arterial roads—. those splendid feats of engineering—against power pylons that carry new-amenities to whole districts, against the fre- quency of petrol stations," though I confess I find myself less- in sympathy with him when to this catalogue he adds : "The. endless stream of motor traffic that has brought the country-.

The 'landscape of England'. 'By diaries Bradley Ford. (Balisford. 128. 6d.) side to life again after its long and rather stuffy nineteenth- century torpor." The urgent necessity, however, is for us to deal with our particular problem in the most intelligent and energetic manner possible, so that, as Mr. Ford puts it, future generations may not turn to them 4the photographs in this book) with sadness for a spoilt beauty and bitterness for the betrayal of a precious trust."

Even today it is difficult to look at these illustrations without sorrow and anxiety. How long, we wonder, will that sunken narrow lane remain untouched, with its tangle of bracken and wild flowers ? How long will the banks of the Dart slope down to the water, dark with woods ? Change is inevitable ; the most that we can hope is that changes should be brought about in a way which will not make our de- scendants blush for us.

" It should be within the province of new generations' (says Mr. Ford), 'to ensure that bungalow-growths and strip-development, pylons petrol stations and the _like should appear at least the products of a vigorous cOntemporary taste ; in which respect few will admit that they have risen adequately to the occasion. The outskirts of beautiful old towns and villages are too often disfigured by the exuberant creations of local builders in sham half-timber and blushing pink tiles, the embodiments of cosy dreams of hearth and home on the instalment plan ; while petrol stations are beginning to assume as wide a range of fancy dress as has already been adopted in America. Many mere such disfigurements could obviously be cited, and it would appear that generally speaking, it is only in the design of factories and bridges that any noticeable advance has been registered, as is evident from the exciting concrete structures of both types which are beginning to make their appearance about the country.'."

That is the sane, the reasonable, the broad-minded point of view. It is the point of view which societies such as the Council for the -Preservation of Rural England, to which this book is dedicated,- exist. to support. It is a cause with claims upon us all, excellently furthered by publications such as those sponsored by Messrs. Batsford.

The range of this boa is Wide, sinee it embraces thirty- three counties in its five sections—Northern England, the Midlands, East Anglia, the Horne Counties and South-east England, the West Country. Some eighty pages of letterpress are supplemented by 135 illustrations' front -photographs;

nor has Mr. Ford hesitated to include views of the industrial areas as well as views of lake, river, and cornfield. It is the sort of book which • makes one wish that Messrs. Batsford could be induced to produce another series, county by county. The cottages of England they have already done ; the villages

of England too ; its homes and gardens ; English inns ; and English country life and work. I suggest that; having covered the ground in so concise though generalized a way, they might

now turn their attention to the particular. Not only might they inaugurate a- County-by-County series, but also another series dealing with modern developments of building in England, its terrors, its errors, its failures, its successes. They would be rendering a real public service. I am aware that they have already published innumerable books on various architectural subjects, also a study of modern decorative art in England ; but, so' far as I-know, this all-important field of Modern building and modern development in rekitiori to the

countryside remains as -yet untouched. It offers a 'great opportunity to the patriotic and enterprising pubfisher to'

show us our Mistakes as disagreeably as possible with the help of the camera.