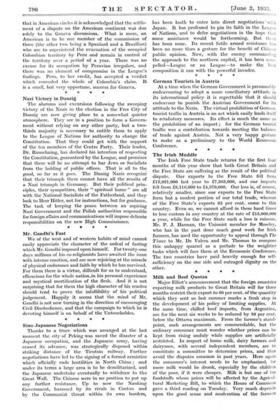 The Irish Muddle The Irish Free State trade returns for

the first four months of this year show that both Great Britain and the Free State are suffering as the result of the political dispute. Our exports to the Free State fell from £12,021,000 last year to £7,863,000, and our imports fell from £8,116,000 to £4,970,000. Our loss is, of course, relatively, smaller, since our exports to the Free State form but a modest portion of our total trade, whereas of the Free State's exports 85 per cent, come to this country. Even so, we cannot afford in these hard times to lose custom in any country at the rate of £15,000,000 a year, while for the Free State such a loss is ruinous. Mr. P. J. Hannan, the Unionist member for Moseley, who has in the past done much good work for Irish farmers, has used the opportunity to appeal through The Times to Mr. Be Valera and Mr. Thomas to compose this unhappy quarrel as a prelude to the weightier tasks which will face them at the Economic Conference. The two countries have paid heavily enough for self- sufficiency on the one side and outraged dignity on the other.