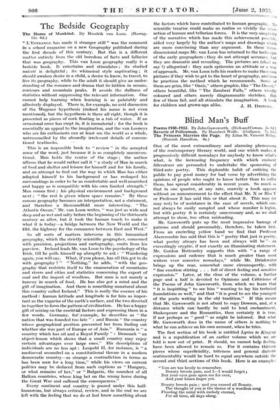 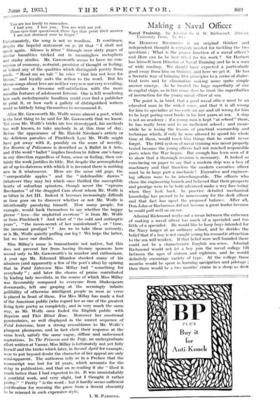 ONE of the most extraordinary and alarming phenomena of the contemporary literary world, and one which makes it progressively difficult nowadays for anybody to know what's what, is the increasing frequency with which eminent litterateurs are persuaded to undertake the sponsoring of third-rate poetry. This deplorable habit of enticing the public to pay good money for bad verse by advertising the opinions of people who ought to know better than to suffer them, has spread considerably in recent years. So much so that in one quarter, at any rate, scarcely a book appears without an announcement to the effect that Mr. X or Miss Y or Professor Z has said this or that about it. This may (or May not) be of assistance in the Case of novels, which can- not always be easily sampled and whose number is legion, but with poetry it is certainly unnecessary and, as we shall attempt to show, too often misleading.

Mr. Gawsworth 'puts up the most impressive barrage of patrons and should presumably, therefore, be taken first. From an encirclin'g yellow band we find that Professor Abercrombie has said that this is "poetry that just is poetry, what poetry always has been and always will be "—an exceedingly cryptic, if not exactly an illuminating statement. Mr. Gordon Bottornley supports this with "a range of expressions and cadence that is much greater than most writers ever conceive nowadays," while Mr. Drinkwater brings up the rear, somewhat more circumspectly, with "fine emotion stirring . . . full of direct feeling and sensitive expression." Later, at the close of the volume, a further page and a half is devoted to Opinions and Criticisms of the Poems of John Gawsworth, from which we learn that "it is inspiriting" to see him "wanting to lay his technical foundations so well," and that "it is good to see the youngest of the poets writing in the - old tradition." - If this means that Mr. Gawsworth is not afraid to copy Dawson, and, at a distance which care hardly be said to lend enchantment, Shakespeare and .the Romantics, then certainly it is true, if not perhaps so "good ". as might be inferred. But what Mr. Gawsworth does in the - name of others is nothing to what he can achieve on his own account, when he tries.

The first section• of his book is entitled Lyrics to Kingcup and is a republication of an earlier volume which we are told is now out of "print. It should,- we cannot help feeling, have been allowed to remain so. For it contains thirteen pieces whose superficiality, triteness and general diabetic sentimentality 'would be hard to equal anywhere outside the second and third sections of this book. Here is an example : "You are too lovely to remember.

Beauty breeds pain, and I—I would forget ; • But your eyes gaze upon-me-for ever, And your kisses linger yet.

Beauty breeds pain ; 'and you exceed all Beauty.

The thought of you is the theme of a wordless song Flooding the mind with melody eternal,

For all time, all days along.

You are too lovely to remember.

I had you. I lost you. You are with me yet. Those eyes that questioned, those lips that prest their answer I am not destined ever to forget."

Unfortunately, the song is not so wordless. It continues, despite the hopeful statement on p. 29 that "I shall not speak again. Silence is fitter" through over sixty pages of similar banalities tricked out in meaningless metaphors and slushy similes. Mr. Gawsworth seems to have no con- ception of economy, restraint, precision of thought or feeling, or indeed any of the qualities which distinguish poetry from punk. "Read me no tale" he cries "that has not love for theme," and loyally suits the action to the word. But his theme-songs about love are neither very new nor very revealing, and combine a tiresome self-satisfaction with the more maudlin features of adolescent fervour. One is left wondering how such melodramatic hoodlum could ever find a publisher to print it, or how such a gallery of distinguished writers could so blithely bring themselves to recommend it.

After Mr. Gawsworth Mr. Wolfe seems almost a poet, which is the best thing to be said for Mr. Gawsworth that we know. Yet even Mr. Wolfe's tricks are too stereotyped, his methods too well known, to take anybody in at this time of day. Before the appearance of Mr. Harold Nicolson's article or the delicious parodies of Pinchbeck Lyre Mr. Wolfe might have got away with it, possibly on the score of novelty. For Reverie of Policeman is described as A Ballet in 8 Acts, and if the word " ballet " implies freedom to follow one's fancy in any direction regardless of form, sense or feeling, then cer- tainly the work justifies its title. But despite the accomplished air of up-to-dateness with which it is invested there is nothing new in it whatsoever. Here are the same old gags, the "unrepeatable apples" and the "indefeasible dawns" (whatever they may be) which once thrilled the susceptible hearts of suburban spinsters, though never the "epicene Bacchantes" of the draggled Cam about whom Mr. Wolfe is so bitter in Act III. Indeed it becomes increasingly difficult as time goes on to discover whether or not Mr. Wolfe is intentionally parodying himself. How many people, for example, would back themselves to say whether the happy phrase "love—the unplotted overtone" is from Mr. Wolfe or from Pinchbeck ? And what of "the cold and antiseptic years", "the moon-secret of her maidenhood", or "time, the incessant prodigal " ? Are we to take these seriously, or is Mr. Wolfe quietly pulling our leg ? We hope the latter, but we have our doubts.

Miss Millay's muse is transatlantic not native, but this does not prevent her from having literary sponsors here second only to Mr. Gawsworth's in number and enthusiasm. A year ago Mr. Edmund Blunden shocked many of his admirers (and apparently a few of the poet's also) by opining that in Fatal Interview Miss Millay had "something for everybody " ; and later the chorus of praise contributed by leading lady novelists, in the course of which Miss Millay was favourably compared to everyone from Shakespeare downwards, left one gasping at the seemingly infinite gullibility of otherwise intelligent people as soon as verse is placed in front of them. For Miss Millay has made a fool of the American public (who regard her as one of the greatest living lyric poets) as completely, and in very much the same way, as Mr. Wolfe once fooled the English public with Requiem and This Blind Rose. Moreover her emotional pyrotechnics, so well displayed in the sonnet sequence of Fatal interview, bear a strong resemblance to Mr. Wolfe's plangent pleonasms, and in fact elicit their response at the same level, satisfy the same vague, diffuse and unfocussed aspirations. In The Princess and the Page, an undergraduate effort written at Vassar, Miss Millay is fortunately not yet fully herself and the tricks which later, in Second April for example, were to put beyond doubt the character of her appeal are only semi-apparent. The authoress tells us in a Preface that the manuscript was lost for 13 years, which accounts for the delay in publication, and that on re-reading it she "liked it much better than I had expected to do. It was unmistakably a youthful work, and very slight, but I thought it rather pretty." " Pretty " is the word : but it hardly seems sufficient Justification for rescuing the piece from a decent obscurity to be reissued in such expensivn style. I. M. PARSONS.