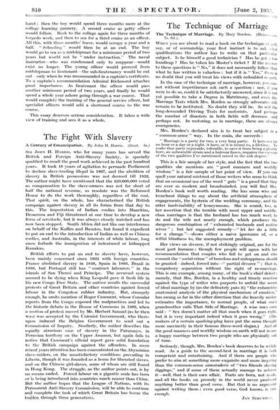 The Fight With Slavery

A Century of Emancipation. By John H. Harris. (Dent. 5s.) Sin. JOHN H. HARRIS, who for many years has served the British and Foreign Anti-Slavery Society, is specially qualified to recall the good work achieved in the past hundred years. It took 18 years of agitation to persuade Parliament to declare slave-trading illegal in 1807, and the abolition of slavery in British possessions was not decreed till 1833. The author might have mentioned that the /20,000,000 voted as compensation to the slave-owners was not far short of half the national revenue, so resolute was the Reformed House to do the work thoroughly, regardless of the cost. That spirit, on the whole, has characterized the British campaign against slavery in all its forms from that day to this. The importation of Indian coolies into Mauritius, Demerara and Fiji threatened at one time to develop a new form of servitude, but it was always closely watched and has now been stopped. South Africa did not like our interference on behalf of the Kaffirs and Basutos, but found it expedient to put an end to the introduction of Indian as well as Chinese coolies, and Australia, in the interests of white labour, long since forbade the immigration of indentured or kidnapped Kanakas.

British efforts to put an end to slavery have, however, been mainly concerned since 1833 with foreign countries. France abolished slavery in 1848, Spain in 1886, Brazil in 1888, but Portugal still has contract labourers" in the islands of San Thome and Principe. The accursed system" seemed to be dying when King Leopold gave it fresh life in his new Congo Free State. The author recalls the successful protests of Great Britain and other countries against forced labour in the Congolese rubber industry. But, strangely enough, he omits mention of Roger Casement, whose Consular reports from the Congo exposed the malpractices and led to the historic debate in the House of Commons in 1903, when a motion of protest moved by Mr. Herbert Samuel (as he then was) was accepted by the Unionist Government, who there- upon induced the Belgian Government to send out a Commission of Inquiry. Similarly, the author describes the equally atrocious case of slavery in the Putumayo, in Peruvian territory on the Upper Amazon, but again fails to notice that Casement's official report gave solid foundation to the British campaign against the offenders. In more reeent years attention has been concentrated on the Abyssinian slave-raiders, on the unsatisfactory conditions prevailing in Liberia, though it was founded as a home for liberated slaves, and on the Chinese girl-slaves, some of whom are still found in Hong Kong. The struggle, as the author points out, is by no means ended. Forced labour on a gigantic scale has been or'is being introduced into countries much nearer than China. But the author hopes that the League of Nations, with its Peirmanent Anti-Slavery Commission, will be able to continue an complete the task of which Great Britain has-borne the burlden through three generations. _