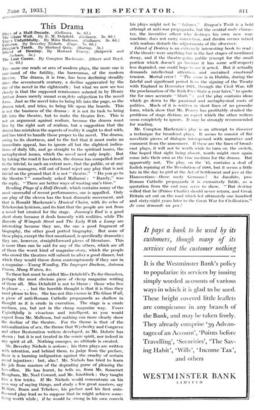 Dragon's Teeth. By Shirland Quin. (Harrap. 5s.) Tim more one reads or sees of modern plays, the more one is convinced of the futility, the barrenness, of the modern theatre. The drama, it is true, has been declining steadily since the seventeenth century, a decline aggravated by the use of the novel in the eighteenth ; but what we now see too clearly is that the supposed renaissance ushered in by Henry Arthur Jones merely meant cem2lete subjection to the novel form. Just as the novel tries to bring life into the page, so the drama tried, and tries, to bring life upon the boards. This is not the business of the drama : it is not its task to bring life into the theatre, but to make the theatre live. This is not an argument against realism, because the drama must live by the right sort of realism, but a suggestion that the drama has mistaken the aspects of reality it ought to deal with, and has tried to handle those proper to the novel. The drama, owing to its shortness, and to the fact that it must make an immediate appeal, has to ignore all but the slightest indica- tions of daily life, and go straight to the spiritual issues, the metaphysical issues, which the novel need only imply. But by taking the road it has taken, the drama has compelled itself to the trivial, to such an extent now, that the public, or at any rate the managers, will out of hand reject any play that is not trivial on the ground that it is not " theatre." "Do you go to the theatre ? " somebody asked Mallanne : "Rarely," was the reply. "There are better ways of wasting one's time."

Reading Plays of a Half-Decade, which contains many of the most successful of recent performances; one is appalled. Only one play of the eleven has the least dramatic movement, and that is Ronald Mackenzie's Musical Chairs, with its echo of Tehekovian lyricism, and its hint that the people are not from a novel but created for the stage. Journey's End is a good short story because it deals honestly with realities, while The Barrens of Wimpole Street and The Lady With a Lamp are interesting because they are, the one a good fragment of biography, the other good potted biography. But none of these plays, except the first mentioned, is specifically dramatic; they are, however, straightforward pieces of literature. This is more than can be said for any of the others, which are all of them the worst kind of magazine-story, which the people who crowd the theatres will submit to after a good dinner, but which they would throw down contemptuously if they saw in a magazine—Young Wdodley, The Improper Duchess, Autumn Crocus, Many Waters, &e.

To these last must be added Miss Delafield's To See Ourselves, perhaps the most obvious piece of cheap magazine writing of them all. Miss Delafield is not to blame : those who live to please . . . but the horrible thought is that it is thus they must please to live. She has not this excuse in The Glass Walt, a piece of anti-Roman Catholic propaganda as shallow in thought as it is crude in execution. The stage is a crude medium, yes, but not in the cheap magazine way. Yours Unfaithfully is vivacious and intelligent, as you would expect from Mr. Malleson, but nothing can more clearly show the decline of the theatre. For the theme is that of the rationalization of sex, the theme that Wycherley and Congreve and other Restoration writers developed, as Mr. Dobree has shown ; but it is not treated in the comic spirit, nor indeed in any spirit at all. Nothing emerges, no attitude is created.

Mr. Beverley Nichols is serious ; his three plays are written with intention, and behind them, to judge from the preface, there is a burning indignation against the cruelty of certain social injustices : but, alas ! Mr. Nichols has tried to learn his job from masters of the degrading game of pleasing the box-office. He has learnt, he tells us, from Mr. Somerset Maugham, Mr. Noel Coward, and Mr. Knoblock : they taught him a few tricks. If Mr. Nichols would concentrate on his Own way of saying things, and study a few great masters, say Moliere, Ibsen and Tchekov, his preface and his first unin- fluenced play lead us to suppose that he might achieve some- thing worth while ; if he would be strong in his own conceit his plays might not be " failures." Dragon's Teeth is a bold attempt at anti-war propaganda, but the central male charac- ter, the inventive officer who destroys his own new war- machine, does not carry conviction, and drelim scenes mixed with realism disturb the adjustments of the observer.

Island of Destiny is an extremely interesting book to read : if the theatre were anything but in the last stages of moribund decay, and if the theatre-going public (except for the small portion which doesn't go because it has some self-respect) less degraded, one could hope to see it acted. But it actually demands intellectual attention, and sustained emotional tension. Mortal error ! "The scene is in Dublin, during the fateful and significant period from the signing of the Treaty with England in December 1921, through the Civil War, till the proclamation of the Irish Free State a year later," to quote the for once accurate." blurb " : and the play contains ideas which go down to the passional and metaphysical roots of politics. Much of it is written in short lines of no prosodic form, which show that Mr. Peacey has profitably studied the problems of stage diction, an aspect which the other writers seem completely to ignore. It may be strongly recommended for reading.

Mr. Compton Mackenzie's play is an attempt to discover a technique for broadcast plays. It seems to consist of flat novelistic pieces of dialogue interspersed with narrative and comment from the announcer. If these are the lines of broad- cast plays, it will not be worth while to turn on the switch. One hoped that sight being absent, words might once again come into their own as the true medium for the drama. But apparently not. The play, on the '45, contains a deal of foolish repining at the Revolution of 1688, brit it seems a little late in the day to gird at the Act of Settlement and jeer at the Hanoverians—those nasty Germans ! As Jacobite, pro- Roman Catholic propaganda it is excessively futile, as a quotation from the end may serve to show. " But destiny willed that he (Prince Charlie) should never return, and Great' Britain set out on the road which led ultimately one hundred and sixty-eight years later to the Great War for Civilisation.". Je your demande un pen!