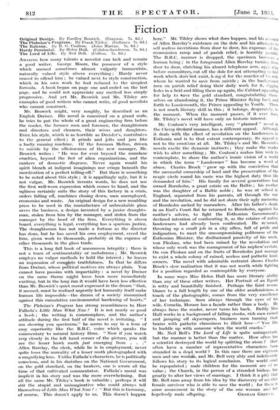 AMAZING how many talents a novelist can lack and remain

a good writer. George Moore, the possessor of a style which seemed sometimes almost vulgarly immaculate, naturally valued style above everything ; Hardy never ceased to offend him ; he valued next to style construction, which in his own work he had reduced to the simplest formula. A book began on page one and ended on the last page, and he could not appreciate any method less simply progressive. And yet Mr. Beswick and Mr. Tilsley are examples of good writers who cannot write, of good novelists who cannot construct.

Mr. Beswick might, very roughly, be described as an English Dreiser. His novel is conceived on a grand scale, he tries to put the whole of a great engineering firm before the reader, the furnace men and foremen, the draughtsmen and directors and cleaners, their wives and daughters.

Even his style, which is as horrible as Dreisler's, contributes. to the general effect ; it grinds and jolts and jars like a badly running machine. Of the foreman Mellon, drivea to suicide by the officiousness of the new manager, Mr. Beswick writes : "He was for ever beyond the mundane cruelties, beyond the fret of alien organizations, and the cankers of domestic disgrace. Never again would his- spirit blench at indigent imaginings nor cringe beneath the mordication of a perfect telling-off." But there is something to be noted about this .style ; it is appallingly ugly, but it is not vulgar. Mr. Beswick invents words, he does not use the first well-worn expression which comes to hand, and the ugliness certainly suits the story of this factory in a crisis,' orders falling off, machines closing down, men unemployed, economies and waste. An original design for a new moulding press to be used in the, manufacture of unbreakable glass. saves the business, a design invented by a junior draughts- man, stolen from him by the manager, and stolen from the manager by the head of the firm. Everything is above board, everything is legal, everything has a spurious justice.

The draughtsman has not- made a fortune as the director has done, but he has saved' his own employment, saved the firm, given work to thousands, probably at the expense of other thousands in the glass trade.

This is a long full book of uncommon integrity ; there is not a trace of sentimentality or melodrama ; Mr. Beswick employs ho vulgar methods to hold the interest ; he leaves an impression of comigete- truthfulness:, In that he differs from Dreiser, whose political motives are always plain. You

cannot have passion with impartiafity : a novel by Dreiser on the same theme might have been more immediately exciting, but in the long run it would have been less effective than Mr. Beswiek's quiet moral expressed in the dream "that, it seemed., must be realized urgently lest humanity itself make human life impossible—the dream of a society immunized against this cumulative environmental hardening of hearts." The Plebeian's Progress has 'strong resemblances to Herr Fallada's Little Man What Now ? It is not nearly so good a book ; the writing is commonplace; and. the author's attitude during the first half of the novel is irritating. "I am showing you specimens," he seems to say in a tone of easy superiority like the B.B.C. voice which speaks the commentary to natural history films. " Now if you watch very closely in the left hand corner of the picture, you will see the lesser hawk moth just emerging from . ." Allen Barclay, the clerk, while he is in employment; never quite loses the unreality of a lesser moth photographed with a magnifying lens. Unlike Fallada's characters, he is politically

conscious, and in his diatribes on the National Government, on the gold standard, on the bankers, one is aware all the

time of that cultivated commentator. Fallada's moral was implicit in his story and was the more overwhelming. But all the same Mr. Tilsley's book is valuable ; perhaps it will stir the stupid and unimaginative who could always tell themselves of Little Man What Now ? : "But this is Germany,

heir." Mi. Tilsley shows what does happen, and his aceount of Allen Barclay'a existence on the dole and his attempts to sell useless inventions from door to door, his exposure of Om Commission ramp and of parish relief, - is horribly painful. The B.B.C. manner is dropped, the specimen becomes a human being ;' in the foreground Allen Barclay turning from door to .door, clutching his absurd telephone arm, appe:.r:ng before committees, cut off the, dole for not attempting to find work which:does hot exist, h ing:id for the Cannier of his wife whom he wanted to save frona ,suicide';. in the background men on pariah relief doing their daily' work for it, digging holes in a field and filling them up again, the Cabinet appealing for help to Save the gold standard, congratulating them- selves on abandoning it, the Prime Minister flying back and forth to Lossiemouth; the Prince appealing to Youth. There is not much literary skill in this ; it belongs, desperately, to the moment. When the moment passes, if it ever does, Mr. Tilsley's novel will have only 'an higtoric interest.

Mr. Coulson's very intelligent, very " planned " novel in the Cherry Orchard manner, has a different appeal. Although it deals with the effect of revolution on the landowners in Esthonia and is to that extent contemporary, its appeal is not to the emotions at all. Mr. Tilsley's and Mr. Beswick's novels excite the dynamic instincts ; they make the reader wish to alter something ; Mr. CouLson's makes him wish to contemplate, to share the author's ironie vision of a world in which the term " Landowner " has become a word of abuse. Charles Brock "grew up with the conviction that the successful ownership of land and the preservation of the magic circle round his caste was the highest duty that life demanded of him." His family for several generations had owned Bornholm, a great estate on the Baltic ; his mother was the daughter of a Baltic noble ; he was at school in England, separated from his parents, all through the war and the revolution, and he did not share their ugly memories of Bornholm sacked by marauders. After his father's death in an Earl's Court flat he returned to Bornholm, against his mother's advice, to fight the Esthonian Government's declared intention of confiscating it, as the estates of native landowners had already been confiscated. He reamed, throwing up a small job in a city office, full of pride and indignation, to meet the uncompromising politeness of the Esthonian Minister, the disillusioned passivity of his uncle, von Pleskau, who had been ruined by the revolution and whose only work was the management of his nephew's estate. On von Pleskau and on the fruits of Bornholm just manage to exist a whole colony of ruined, useless and pathetic land- Owners. The novel with admirable restraint shows Charles Brock's slow realization that it was not worth while fighting for a position regarded as contemptible by everyone.

In some ways Miss Helen Hull has more literary ability than any of these other writers. Her Portrait of an Egoist is witty and beautifully finished. Perhaps the faint resem- blance to a full length by one of the older ma' dennicians, a touch of the photographic, comes from the very excellence of her technique. Seen always through the eyes of his wife, Cornelia, Horace has a facade rather than a body. Ile always faces the reader, never turns his back. Deftly Miss Hull works in a background of falling stocks, rich men ruined and jumping off skyscrapers, business men turning their brains with pathetic clumsiness to illicit love—" You like to huddle up with someone when the world cracks."

Mr. Neil Bell's The Lord of Life is quite unimportant, but the manner is better than the matter. How often has a scientist destroyed the world by splitting the atom ? How often have a number of representative characters been stranded in a dead world ? In this case there are eighteen men and one woa' , and Mr. Bell very ably and indelicately follows his story to its logical conclusion. The world must be repopulated ; male children for the moment are of no value ; the Church, in the person of a stranded bishop, has greatly to alter her views of marriage. I think it a pity that Mr. Bell runs away from his idea by* the discovery of another female survivor who is able to save the world ; for there IS some amusement in the story of the one woman and her