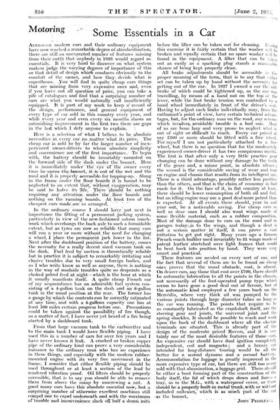 Page 28, 2 June 1933 — Motoring Some Essentials in a Car ALTHOUGH modem ears and
Close

Motoring Some Essentials in a Car ALTHOUGH modem ears and

their ordinary equipment have now reached a remarkable degree of standardization, there are still an unexpected' number of features missing from their outfit that anybody in 1933 would regard as essentiitls: -It is very hard-to discover on what system makers judge the varying degrees of importance of this or that detail of design which conduces obviou§ly to the comfort of the owner, and how they... decide what is superfluous. „you will find_ in quite "cheap., cars things that are missing from Very expensive ones and, even if you leaVe out all of price, you can take a pile of catalogues and .find that a surprising number of cars are what you watil.d naturally call insufficiently equipped. It is part of my work to keep a record of the design, performance, and general equipment of every kype of ear sold. inthis country every year, and while every year and even every six months shows an astonishing improvement in the first two there are gaps in the la whicluI defy anyone to explain Here is a, selection of what I believe_ to he absolute necessities in every.eaLTIQ.414..ttkr H'llat its Price. The cheap car is -sold tally- far the larger number of inex- perienced oWner-drivers to *hem -absolute simplicity and convenience are of the first ithportance.-- To' begin with, the battery should be invariably mounted on the forward *side of the dash Under the -bonnet. Here it is initriediately under the e-ye-701--th-e-cii-vicel every time he-opens -sthe,hecrinet, -of -the 'wet and the mud and it-is properly accessible-for topping-up. - Slung in the frame under the floor boards it is bound to be neglected to an extent that: without' exaggeration, may be said to .halve its !life; -There "shOnld be nothing requiring any attention . under the -door. boards and nothing on the 'running boards. At -least two of the cheapest cars mada,are so arranged, In the ordinary .course I should .liaize.-put next in importance the fitting of a permanent , jacking system, particularly in view of the new-fashioried saloon coach- work which overhangs the back axle to such a formidable extent, but as tyres are now So reliable that many cars -will run a year or more withont the need for changing a wheel, I place the perinanent jack lower in the list. Next after the dashboard position of the battery, comes the necessity for a really decent sized vacuum tank on the dash. Fuel feed by suction is theoretically reliable but in practice it is subject to remarkably irritating and elusive troubles due to very small foreign bodies, and as I who write know as well as anyone, there is nothing in the -way of .roadsido troubles quite so-desperate as a choked petrol feed at'night—which is the hour at which it usually manifests itself. -A quite cheap French car of my acquaintance has an admirable fuel system con- sisting of a 4-gallon tank on the dash and an '8-gallon tank in the usual position at the rear. The former has a gaugeby_ which the contents can 1:?e correctly estimated at any time, and with a 4-gallons capacity one has at least 100 miles certain progress before one. Precautions could be taken against-the possibility-of fire though, as a matter of fact, I have never yet heard of a fire being started by a dashboard tank. _ _ From that large vacuum tank to the carburetter and to the lapin tank I would _have flexible piping. I have used this in a number of cars for ,over ten years and I have never known' it leak. A cracked or broken copper pipe of the-ordinary kind can prove a very .considerable nuisance to the ordinary man who has no experience in these things, and especially with the modern rubber- mounted engine with its very free movement in the frame, I consider that either flexible piping should be used throughout or at least a section of the lead be rendered vibration proof. •Oil filters should be properly accessible, that is to say you should be able to: remove them from above the sump by unscrewing a _nut. A good many cars have this absolute essential now, but a surprising_number of otherwise excellent machines still compel one to crawl underneath and-with the maximum- troAle and inconvenience slack ofthalf doteii nuti before the filter can be taken out for cleaning. During this exercise it is fairly certain that the washer will he broken and equally certain that no spare washer will be found in the 'equipment. A filter -that can be taken out as easily as a sparking plug stands a reasouable chance of being kept properly clean.

All brake adjustments should be accessible in the proper meaning of the terra, that is to say that either set can be .taken up. by hand without the necessity for getting out of the car.-In 1927 I owned a ear the side brake- of which could be tightened up, as . the ear was travelling, by means of a, hand nut on the top of the lever, -while the foot-brake tension was controlled by a hand wheel immediately in front of the driver's scat. Having to adjust each brakeindividually may, from the enthusiast's -point of view, have certain technical advan- tages,- bid, for the-ordinary man 'On the road, any scheme which involves. avoidable . trouble is a bad one. Most of Us are bone lazy- and very prone to neglect what is out of sight or :difficult-to reach. Every car priced at say £200 or more should be fitted with a free wheel. For myself I am -not particularly attached to a free wheel, but there is no question that for the moderately exPerienced owner-driver it has two conspicuous merits. The first is that _after only a very little practice gear changing can be done without any damage to the teeth of the gears and,- a Minor point, in absolute silence; the second is the considerable saving of wear and tear on engine and Chassis that results from its intelligent use. There is a third advantage, possibly rather less positive tharr the others, and that is the claim of economy in fuel Made for it. On the face of it, in flat country at least, there should be lower consumption of both oil and fuel, but an idling engine may use a good deal more petrol than is expected. At all events there should, year in and year out, be a noticeable saving. For cheap cars as well as dear ones I should- also want wings made of some flexible material, such as a rubber composition. Most of the damage done to ears on the road and in garages todayvi.s to the wings, and though a dent is not a serious, matter it can , prove a vast irritation to get put right. Many years ago a famous French coach- builder used invariably to fit wings made or patent leather- stretched over light frames that 'could be bent back into position by hand. They were very smart and practical. . - :These features are needed on every -sort of car, and the fact that several of them are to be found on cheap ' ones proves that the usual obstacle, cost, is absent. On dearer cars, say- those that cost over voo, there should be automatic lubrication to, all the points in the chassis,. not necessarily of the foot-operated pump .type which' seems to have gone a -good deal out of favour, but of the automatic kind employed- a few years back on the Mercedes, where very thick oil wa,s, pumped to the various Points through large diameter tubes so Jong as the car was running. The points that require to be as constantly lubricated as the crankshaft itself, are the steering gear and joints, the universal joint and the spring shackles. It should be possible to reach and work upon the back of the dashboard where all the- electric terminals' are situated. This is 'already part -of the design of the moderate priced foyers, and it- is cer- tainly one of the most desirable features of those ears. An expensive car should have dual ignition completely independent, coil and magneto ; and a luxury car intended for long-distance -tenting -Would be all the better for a second dynamo and -a second battery. Accommodation for luggage is greatly improved in the more expensive type of car, but there are still too mans sold with that abomination, a luggage grid. There should . be either a boot forming part of the construction of' the body .itself, the lid of which drops down and forms a tray,i in the .M.-G.5 with a. waterproof cover, or there Should be a properly built-in metal trunk, with or without included' suitcase; Whieh as niiicli part of the ear -as the bonnet, - JOHN