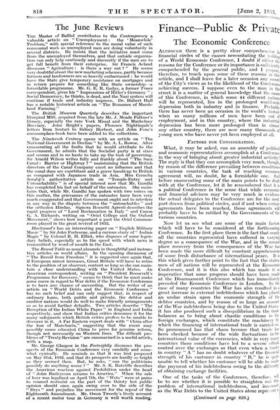 THE Master of 13alliol contributes to the Contemporary a valuable article on " Unemployment : the 'Meanwhile' Problem," with special reference to the moral value of such communal work as unemployed men are doing voluntarily in several districts. He insists that the initiative must come from the unemployed themselves, and that outside organiza- tion can only help cautiously and discreetly if the men are to get full benefit from their enterprise. Sir Francis Acland discusses " Agriculture : is there a way out ? " He seems very doubtful about the new marketing schemes, partly because farmers and landowners are so heavily embarrassed : he would have the State give temporary assistance on mortgages and in return prepare for something like State ownership—a formidable programme. Mr. G. E. R. Gedye, a former Times correspondent, gives his "Impressions of Hitler's Germany " ; Social Democracy, he thinks, is dead, and the Nazi system will continue if trade and industry improve. Dr. Hubert Hall has a notable historical article on "The Romance of Marsh- land Farming."

The Nineteenth Century opens with an article on "The National Government in Decline" by Mr. A. L. Rowse. After enumerating all the faults that he would attribute to the Government, he admits that the Socialist party is at sixes and sevens and in no haste to take up the task of governing. Sir Arnold Wilson writes fully and frankly about "The Suez Canal : Barrier or Highway ? " maintaining that the British directors of the Canal Company exert no influence and that the canal dues are exorbitant and a grave handicap to British as compared with Japanese trade in Asia. Miss Cornelia Sorabji's authoritative article on "Temple-Entry and Untouchability" is of special interest now that Mr. Gandhi has completed his fast on behalf of the outcastes. She main- tains that, while Mr. Gandhi has spoken with two voices on this matter, the grievances of the outcastes have been very much exaggerated and that Government ought not to interfere in any way in the dispute between the " untouchables " and the orthodox Hindus. Signora Rossetti Agresti describes the rapid progress of "Land Reclamation in Italy" and Canon G. A. Richards, writing on "Oriel College and the Oxford Movement," shows how important a part the Oriel Common- room played in the great revival of 1833.

Black-wood's has an interesting paper on "English Military Music " by Sir John Fortescue, and a curious study of" Indian Magic" by Colonel R. H. Elliot, who disposes of some legen- dary beliefs, especially as to the speed with which news is transmitted by word of mouth in the East.

The Round Table as usual abounds in thoughtful and instruc- tive articles on world affairs. In the opening discussion of "The Recoil from Freedom" it is suggested once again that, if European unrest increases, Great Britain will have to retire to the position of an observer, content so long as she can main- tain a close understanding with the United States. An American correspondent, writing on "President Roosevelt's Programme for Recovery," seems to think that he must make some move in regard to War debts if the Economic Conference is to have any chance of succeeding. But the writer of an article on "World Debts and the Economic Conference" has no such belief and can only suggest that, in respect of ordinary loans, both public and private, the debtor and creditor nations would do well to make friendly arrangements so as to avoid further defaults. Two articles describe "The Reception of the Indian White Paper" in England and India respectively, and show that Indian critics denounce it for the many safeguards which British critics profess to be unable to discover in it. A Far Eastern expert deals with "China after the loss of Manchuria," suggesting that the event may possibly cause educated China to press for genuine reform, though not necessarily on Western lines. The difficult pro- blems of "Treaty Revision" are summarized in a useful article, with a map. Mr. George Glasgow in the Fortnightly discusses the pro- spects of the Economic Conference very candidly and some- what cynically. He reminds us that it was first proposed on May 31st, 1932, and that its prospects are hardly so bright as they seemed then. But, he asks, "can the politicians possibly do anything worse ? " Mr. S. K. Ratcliffe describes the American reaction against Prohibition under the head of "John Barleycorn returns to America." When the sale , of beer was legalized on April 7th, the " Wets " were at pains to counsel restraint on the part of the thirsty lest public opinion should once again swing over to the side of the Drys " and prejudice the movement for the repeal of the Eighteenth Amendment. Mr. Owen Tweedy's lively account of a recent motor tour in Germany is well worth reading.