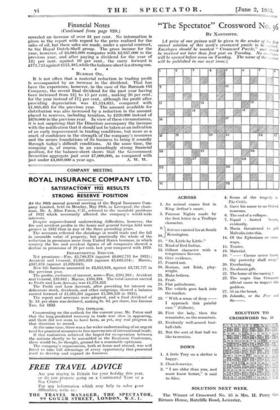 (A prize of one guinea will be given to the sender of the first correct solution of this week's crossword pu=le to be opened. Envelopes should be marked "Crossword Puzzle," and Ahould be received not later than first post on Tuesday. No etwelopes will be opened before noon on Tuesday. The name of the a inner will be published in our next issue.]

5. Famous Nights made by the first letter in a Trollope character.

9' Science catered for at South

13. Gilbert character with a temperance flavour.

211 The vehicle goes back into the market.

29. "With a sense of deep I approach this painful cage" (Gilbert).

30. First the lady,- then the remainder, on the mountain.

32. Not the sort of first ball we like to receive.

1. A little Tory on a shelter is happy.

4. Scene of the tragedy is

5. Gave his name to an Oxford

8. Maria threatened to gull Malvolio into this.

22: The home of the earwig ? 23. The negro Gas Company official came to inspect this goddess.