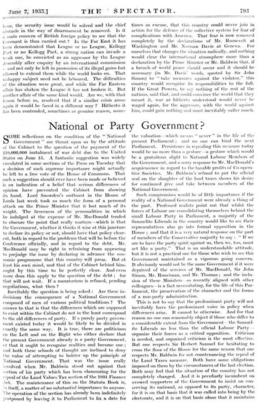 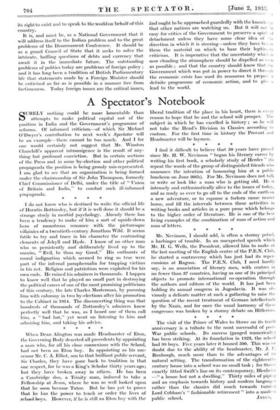 SOME reflections, on the condition of the "National Government" are thrust upon us by the attitude of the Cabinet to the question of the payment. of the £19,000,000 instalment of war debt due to the United States on June 15. A fantastic suggestion was widely circulated in some sections of the Press on Tuesday that a decision of such supreme importance might actually be left to a free vote of the House of Commons. That such a suggestion should ever have been made or believed is an indication of a belief that serious differences of opinion have .prevented the Cabinet from showing its hand. Lord Snowden's outburst in the House of Lords last week took so much the form of a personal attack on the Prime Minister that it lost much of its weight. The fierceness of the personalities in which he indulged at the expense of Mr. MacDonald tended to obscure the point that really matters—which is that the Government, whether it thinks it wise at this juncture to declare its policy or not, should have that policy clear- cut, both in regard to the problems that will be before the Conference officially, and in regard to the debt. Mr. MacDonald may be right• in refraining from appearing. to prejudge the issue by declaring in advance the eco- nomic -programme that this country will press. But at least his own mind, and that of the Cabinet behind him, ought by this time to be perfectly clear.. And even more does this apply to the question of the debt ; for that will not Wait. If a moratorium is refused; pending negotiations, what then ?

Inevitably the question is being asked : Are these in- decisions the consequence of a . National Government composed of Men of various political traditions ? The answer to that is that the differences which are supposed to exist within the Cabinet do not in the least correspond to the old differences of party. If a purely party govern- ment existed today it would be likely to be divided in exactly the same way. It is true, there are politicians on the. Left and on the Right who either declare that the present Government already is a party Government, or that it ought to recognize realities and become one ; and both these schools of thought are inclined to deny the value of attempting to bolster up the principle of National .Government. That was the issue really involved when Mr. Baldwin stood out against that section of his party which has been clamouring for the repeal of the Land Values Tax section of the 1931 Finance Act. The . maintenance of this on the Statute Book is, 311, itself, a matter of no substantial importance to anyone. The operation of the section has already- been indefinitely Postponed by leaving it to Parliament to fix a date for the valuation—which means " never " in the life of the present Parliament ; and no one can bind the next Parliament. Persistence in repealing this measure today would be no more than a gesture—a gesture which would be a gratuitous slight to National Labour Members of the Government, and a sorry response to Mr. MacDonald's acquiescence in regard to the taxable profits of Co-opera- tive Societies. Mr. Baldwin's refusal to put the official seal on the slaughter of the land taxes shows his desire for continued give and take between members of the National Government.

Such compromises would be of little importance if the reality of a National Government were already 0. thing of the past. Professed realists point out that whilst the forces of Labour are consolidating themselves behind the small Labour Party in Parliament, a majority of the Samuclite Liberals in the country would like to sec their representatives also go into formal opposition in the House ; and that it is a very natural response on the part of members of the Conservative majority to say : "If we are to have the party spirit against us, then we, too, must act like a party." That is an understandable attitude, but it is not a practical one for those who wish to see this Government maintained as a vigorous going concern. It obviously would not be the same Government if it were deprived of the services of Mr. MacDonald, Sir John Simon, Mr. Runeiman, and Mr. Thomas ; and the inclu- sion of these Ministers—so recently aligned with other colleagues—is a fact necessitating, for the life of this Par- liament, the preservation of the character and the forms of a non-party administration.

This is not to say that the predominant party will not inevitably have the predominant voice in policy when differences arise.. It cannot be otherwise. And for that reason no one ean reasonably object if those who differ to a considerable extent from the Government—the Samuel- ite Liberals no less than the official Labour Party— organize their forces as a critical opposition. Criticism is needed, and organized criticism is the most effective. But one respects Sir Herbert Samuel for hesitating to cross the floor of the House for the same reason that one respects Mr. Baldwin for not countenancing the repeal of the Land Taxes measure. Both have some obligations imposed on them by the circumstances of the last election. Both may feel that the situation of the country has not completely changed. And it is peculiarly incumbent on avowed supporters of the Government to insist on con- serving its -nationaL as opposed to its party, character, for it is on that basis that it was called into being by the electorate, and it is on that basis alone that it maintains its right to exist and to speak tOtheivOrldon-hthalf of- thig country.

It is, and must be, as a National Government that it will address itself to the Indian problem and to the great problems of the Disarmament Conference. It should be as a grand Council of State that it seeks to solve the intricate, baffling questions of debts and currency that await it in the immediate future. The outstanding problems of politics today are problems of foreign policy ; and it has long been a tradition of British Parliamentary life that statements made by a Foreign Minister should be criticised as far as is possible in a manner free from factiousness. Today foreign issues are the critical issues, nd ought to be approached guardedly with theknowle,:,!e that other nations are watching us. But it will not lw easy:for critics of the Government to preserve a spirit of detachment unless they have some clear idea of the direction in which it is steering—unless they have ber,re them the material on which to base their legal!' te criticism. It is imperative that the uncertainty which is now clouding the atmosphere should be dispelled as soon as possible ; and that the country should know that t he Government which was put in power to direct it throniflt the economic crisis has used its resources to prepar, a definite programme of economic action, and to give a lead to the world.