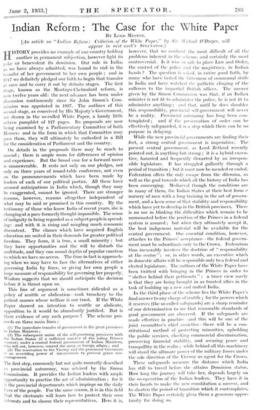 Indian Reform : The Case for the White Paper

Sir Michael O'Dwyer, will [An article on "Indian Reform: Criticism of the White Paper," by appear in next week's SPECTATOR. I HISTORY provides no example of one country holding another in permanent subjection, however light its yoke or benevolent its dominion. Our rule in India, tLs we have always admitted, was bound to end in the transfer of her government to her own people ; and in 1917 we definitely pledged our faith to begin that transfer at once and to carry it out by definite Stages. The first stage, known as the Montagu-Chelmsford reform,. is now twelve years old: the next advance has been under discussion continuously since Sir John Simon's Com- mission was appointed in 1927. The outlines of this second stage, as conceived by His Majesty's Government, are drawn in the so-called White Paper, a handy little octavo pamphlet of 127 pages. Its proposals are now being examined by a Parliamentary Committee of both houses: and in the form in which that Committee may pass them, they will ultimately be embodied in a Bill for the consideration of Parliament and the country.

On details in the proposals there may be much to amend.; there is ample room for differences of opinion and experience. But the broad case for a forward move is unanswerable. It rests not only on. our pledges, not only on three years Of round-table conference, not even on the pronouncements which have been made by leaders of each of our political parties. All these have aroused anticipations in India which, though they may be exaggerated, cannot be ignored. There are stronger reasons; however, reasons altogether independent of what may be said or promised in this country. By the testimony of those who know India of recent years, she is changing at a pace formerly thought impossible. The sense of indignity in being regarded as a subject people is spread- ing: and with it is rising and mingling much economic discontent. The classes which have acquired English education are united in their demands for greater political freedom. They form, it is true, a small minority : but they have opportunities and the will to disturb the multitude, and they can.sound depths of popular emotion to which we have no access. The time in fact is approach- ing when we may have to face the alternatives of either governing India by force, or giving her own people a large measure of responsibility for governing her properly. Wisdom suggests that we should anticipate the decision before it is thrust upon us.

This line of argument is sometimes ridiculed as a policy of 'scuttle or abdication—rank treachery to the patient Masses whose welfare is our trust. If the White Paper showed an -intention to scuttle or abdicate, opposition to it would be abundantly. justified. But is there evidence of any such purpose ? The scheme pro- ceeds on three main lines :

(1) The immediate transfer of government in the great provinces to Indian Ministers ; (2) The subsequent union of the self-governing provinces with the Indian States (if a sufficient number of the riding Princes consent) under a central federal government of Indian Ministers, who will not, however, control the army or foreign affairs ; and

(3) The reservation to the Viceroy and the provincial Governors ni an overriding power of intervention to. prevent grave mis- management.

The first step, commonly but not quite correctly described as provincial autonomy, was advised by the Simon Commission. It provides the Indian leaders with ample opportunity to practise the art of administration : for it is the provincial departments which impinge on the daily lives of the people. For the same reason, it is in this field that the electorate will learn how to protect their own interests and to choose their representatives.. Here it is, however, that we confront the most difficult of all the problems inherent in the scheme, and certainly the most controversial. Is it wise or safe to place Law and Order, the control of the police and the magistracy, in Indian hands ? The question is asked, in entire good faith, by many who have tasted the bitterness of communal strife in India and have watched the pathetic clinging of the sufferers to • the impartial British officer. The answer given by the Simon Commission was that, if an Indian minister is not fit to administer the police, he is not fit to administer anything ; and that, until he does shoulder this responsibility, provincial self-government will never be a reality. Provincial autonomy has long been con- templated; and if the preservation of order can be effectively safeguarded, it is a step which there can be no purpose in delaying. • While the new provincial governments are finding their feet, a strong central government is imperative. The present central government, as Lord Zetland recently pointed out, is anything but strung ; it is a hybrid execu- tive, harassed and frequently thwarted by an irrespon- sible legislature. It has struggled gallantly through a period of transition ; but it must now be mended or ended. Federation offers the only escape from the dilemma, as well as the goal towards which all the history of India has been converging. Mediaeval though the conditions are in many of them, the Indian States at their best form I, nursery of men with a long training in the art of govern- ment, and a keen sense of that stability and responsibility which have yet to develop in the British provinces. There is no use in blinking the difficulties which remain to be surmounted before the position of the Princes in a federal System is assured ; but when they ultimately accept it, the best indigenous material will be available for the central government. One essential condition, however, attaches to the Princes' acceptance—the federal govern- ment must be subordinate only to the Crown. Federation' thus inexorably involves the doctrine of " responsibility at the centre": or, in other words, an executive which in domestic affairs will be responsible only to a federal and elected legislature. The authors of the White Paper have been twitted with bringing in the Princes in order to "shelter behind their petticoats " : a truer view surely is that they are being brought in as trusted allies in the task of building up a new and united India.

In the third phase of the scheme lies the White Paper's final answer to any charge of scuttle ;- for the powers which it reserves (the so-called safeguards) are a sharp reminder of our determination to see that reasonable standards of good government are observed. If the safeguards are made effective in practice—and this will be one of the joint committee's chief anxieties—there will be a con- stitutional method of protecting Minorities, upholding the public services, checking commercial discrimination, preserving financial stability, and securing peace and tranquillity in the realm ; while behind all this machinery will stand the ultimate power of the military forces under the sole direction of the Viceroy as agent for the Crown.

These safeguards measure the distance which India has still to travel before she attains Dominion status. How long the journey will take her, depends largely on the co-operation of the Indian leaders. They have it in their hands to make the new constitution a success, and • to shorten the period of-transition which it contemplates. The White Paper certainly gives them a generous oppor- tunity for doing so.