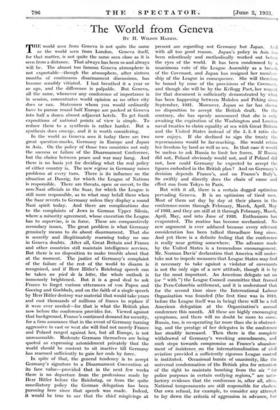 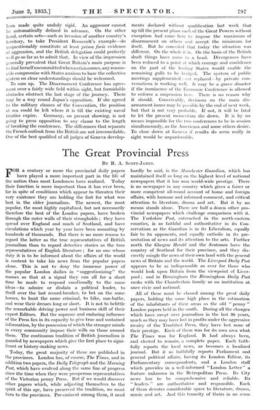 The World from Geneva

THE world seen from Geneva is not quite the same as the world seen from London. Geneva itself, for that matter, is not quite the same seen close as it is seen from a distance. That always has been so and always will be. The almost too famous Geneva atmosphere is not exportable—though the atmosphere, after sixteen months of continuous disarmament discussions, has become sensibly vitiated. I last breathed it a year or so ago, and the difference is palpable. But Geneva, all the same, whenever any conference of importance is in session, concentrates world opinion as no other city does or can. Statesmen whom you would ordinarily have to pursue round half Europe are packed at Geneva into half a dozen almost adjacent hotels. To get frank expositions of national points of view is simple. To reduce them to a synthesis is rather harder. But a synthesis does emerge, and it is worth considering.

In the world as Geneva sees it today there are two' great question-marks, Germany in Europe and Japan in Asia. On the policy of those two countries not only the success or failure of the Disarmament Conference, but the choice between peace and war may hang. And there is no basis yet for deciding what the real policy of either country is. The new regime in Germany raises problems at every turn. There is its influence on the situation at Danzig, for which the League of Nations is responsible. There are threats, open or covert, to the non-Nazi officials in the Saar, for which the League is still more responsible, as to what may befall them when the Saar reverts to Germany unless they display a sound Nazi spirit today. And there are complications due to the complaints of Jews in German Upper Silesia, where a minority agreement, whose execution the League. has to supervise, is in force. These are comparatively secondary issues. The great problem is what Germany genuinely means to do about disarmament. That she is secretly and illegitimately rearming today no one in Geneva doubts. After all, Great Britain and France and other countries still maintain intelligence services. But there is no disposition to make trouble about that at the moment. The justice of Germany's complaint of the failure of the rest of the world to disarm is recognized, and if Herr Hitler's Reichstag speech can be taken au pied de la. lettre, the whole outlook is immensely brightened. But it is a good deal to ask France to forget various utterances of von Papen and Goering and Goebbels, and on the faith of a single speech by Herr Hitler destroy war material that would take years and cost thousands of millions. of francs to replace if it were ever needed—for, that is what the British, plan, now before the conference provides for. Viewed against that background, France's continued demand for security, for a firm assurance that in the event of Germany turning aggressive in east or west she will find not merely France. and Poland ranged against her, but all Europe, -is not unreasonable. Moderate Germans themselves are being quoted as expressing astonishment privately that the world should be content to sit inactive till Germany has rearmed sufficiently to gain her ends by force.

• In spite of that, the general tendency is to acce_pt Germany's signature to a Disarmament Convention at its face value—provided that in the next few weeks there is no departure from the , professions made by Herr Hitler before the Reichstag, or from the quite eonciliatory policy the German delegation has been pursuing here since that speech was made. Indeed, it would be true to say that the chief misgivings at present are regarding not Germany but Japan. And with all too good reason. Japan's policy in Asia has been relentlessly and methodically worked out before the eyes of the world. It has been condemned by a unanimous vote of the League Assembly as a breach of the Covenant, and Japan has resigned her member- ship of the League in consequence. She will therefore be bound by none of the provisions of the Covenant, and though she will be by the Kellogg Pact, her respect for that document is sufficiently demonstrated by what has been happening between Mukden and Peking since September, 1931. Moreover, Japan so far has shown no disposition to accept the British draft. On the contrary, she has openly announced that she is only awaiting the expiration of the Washington and London naval treaties to claim equality at sea with Great Britain and the United States instead of the 5. 5. 3 ratio she now enjoys. If she declined to sign the treaty the repercussions would be far-reaching. She would retain her freedom by land as well as sea. In that case it would be useless to ask Russia to limit her forces. If Russia did not, Poland obviously would not, and if Poland did not, how could Germany be expected to accept the figures embodied in the British plan? And on Germany's decision depends France's, and on France's Italy's. So swiftly and directly, does the chain of cause and effect run from Tokyo to Paris.

But with it all, there is a certain dogged optimism pervading Geneva. It is an optimism of tired men. Most of them sat day by day at their places in the conference-room through February, March, April, May of 1932, and they are still at it through February, March, April, May, and into June of 1933. Enthusiasm has evaporated. The routine has become mechanical. No new argument is ever adduced because every relevant consideration has been talked threadbare long since. And yet there is a definite feeling that the conference is really near getting somewhere. The adyance made by the United States is a tremendous encouragement. Mr. Norman Davis' declaration that America will under- take not to impede measures that League States may find it necessary to take against a violator of covenants is not the only sign of a new attitude, though it is by far the most important. An American delegate sat on (or "with ") the -League Council committee that framed the Peru-Colombia settlement, and it is understood that for the second time since the International Labour• Organization was founded (the first time was in 1919, before the League itself was in being) there will be a full American. delegation .the Organization's annual conference this rannth. All these are highly encouraging symptoms, and there will no doubt be more to come. Russia, too, is co-operating far more than she is obstruct- ing, and the prestige of her delegates in the conference has steadily increased. Then there is the complete withdrawal of Germany's wrecking amendments, and such steps towards compromise as France's abandon- ment of insistence, on the internationalization of civil aviation provided a sufficiently rigorous League control is instituted. Occasional bursts of unanimity, like the universal condemnation of the British plea for retention of the right to maintain bombing from the air "for police purposes in certain outlying regions," are satis- factory evidence that the conference is, after all, alive. National temperaments are still responsible for clashes. Our own refusal, for example, to consider any attempt to lay down the criteria of aggression in advance, has been made quite unduly rigid. An aggressor cannot be automatically defined in advance. On the other hand, certain acts—such as invasion of another country's territory, to take President Roosevelt's example—do unquestionably constitute at least prima fade evidence of aggression, and the British delegation could perfectly well go so far as to admit that. In view of the impression generally prevalent that Great Britain's main purpose is to find herself uncommitted when a crisis comes, any reason- able compromise with States anxious to base the collective system on clear understandings should be welcomed.

To sum up. The Disarmament Conference has agree- ment over a fairly wide field within sight, -but formidable obstacles obstruct the last stage of the journey. There may be a way round Japan's opposition. If she agreed to the military clauses of the Convention, the position at sea could be left where it is till the existing naval treaties expire. Germany, on present showing, is not going to press opposition to any clause to the length of breaking the conference. The differences that separate the French outlook from the British are not irreconcilable. One of the best qualified of all judges of Geneva develop- ments declared without qualification last week that up till the present phase each of the Great Powers without exception had come here to impose the maximum of disarmament on others and accept the minimum for itself. But he conceded that today the situation was different. On the whole it is. On the basis of the British draft things have come to a head. Divergences have been reduced to a point at which courage and confidence on the part of the leading States would enable the remaining gulfs to be bridged. The system of public meetings supplemented—not replaced—by . private con- versations is working well. It may be a grave disaster if the imminence of the Economic Conference is allowed to enforce a suspension here. There is no reason why it should. Conceivably, decisions on the main dis- armament issues may be possible by the end of next week,. but that is not very probable. If not, it will be fatal to let the present momentum die down. It is by no means impossible for the two conferences to be in session simultaneously, as the Americans and some others desire. To close down at Geneva if results do seem really in sight would be unpardonable.