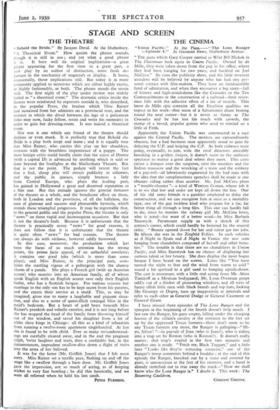 "THE guns which Gary Cooper carried as Wild Bill Hickok in The Plainsman bark again in Union Pacific. Owned by de Mille, they were taken down from the peg in his office, where they had been hanging for two years, and buckled on Joel McCrea." So runs the publicity sheet, and the little reverent anecdote will be believed by anyone who has had any per- sonal contact with film-makers. They have an inexhaustible fund of admiration, and when they encounter a big story—full of history and high-mindedness like the Crusades or the Ten Commandments or the construction of a railroad—their rever- ence falls with the adhesive effect of a tin of treacle. This latest de Mille epic contains all the Excelsior qualities we expect in his work—that sense of a Salvationist drum beating round the next corner—but it is never as funny as The Crusades and he has lost his touch with crowds, the stamp of a broad, popular genius who used to remind us a little of Frith.

Apparently the Union Pacific was constructed in a race against the Central Pacific. The motives are extraordinarily obscure, but a bad business man apparently stood to gain by delaying the U.P. and helping the C.P. As both railways were going, eventually, to join, with the rival directors amicably knocking in a golden sleeper, it doesn't seem to the ordinary spectator to matter a great deal where they meet. This casts rather a damper over the suspense, over the murders and the Indian massacre and the wrecking of a train and the robbery of a pay-roll—all laboriously engineered by the bad man with the idea that the complimentary speeches shall be made at one obscure siding rather than another. Mr. Joel McCrea plays a " trouble-shooter "—a kind of Western G-man, whose job it is to see that law and order are kept all down the line. One of his old army friends is a gambler employed to delay the construction, and we can recognise him at once as a mortality type, one of the gay reckless kind who prepare for a far, far better thing all through a long film. This one can hardly fail to die, since he marries the railway girl Mr. McCrea loves, who is acted—for want of a better word—by Miss Barbaia Stanwyck. Paramount supply us with a sketch of this actress's career, which could hardly be bettered by the sourest critic. " Beauty opened doors for her and talent got her jobs. By fifteen she was in the Ziegfeld Follies. In such vehicles as A Night in Spain and A Night in Venice she was seen hanging from chandeliers composed of herself and other beau- ties." The trouble is that there are no chandeliers in Union Pacific, and Miss Stanwyck has no chance of displaying her curious talent or her beauty. She does display the most bogus brogue I have heard on the screen. Lines like " You have turned the night to fear and the wind from warm to cold " sound a bit spiritual to a girl used to hanging upside-down. The cast is enormous, with a little real acting from Mr. Akim Tamiroff as a Mexican bodyguard; Mr. Lynn Overman peeps oddly out of a thicket of pioneering whiskers, and all sorts of funny elfish little men with black beards and top hats, looking like Grumpy or Dopey, turn up inappositely at intervals and refer to each other as General Dodge or General Casement or General Grant.

I have missed three episodes of The Lone Ranger and the synopsis at the beginning of the fourth doesn't help much. I last saw the Ranger, his guns empty, falling under the charging hooves of the villain's cavalry at the entrance to the fort set up by the oppressed Texan farmers—there don't seem to be any Texan farmers any more, the Ranger is galloping—" Hi- yo, Silver! "—in pursuit of Joan (who is Joan?), who is riding into a trap set by Keston (who is Keston?). It doesn't really matter : that trap's evaded in the first two minutes and another one is ready. " Fetch me, Black Taggart," and a little later " Looks like they're torturing someone," one of the Ranger's troop comments behind a boulder ; at the end of this episode the Ranger, knocked out by a stone and covered by guns, is unconscious at the feet of his enemies, and a hand is already stretched out to tear away 'the mask—" Now we shall know who the Lone Ranger is." I doubt it. This week: The Steaming Cauldron.