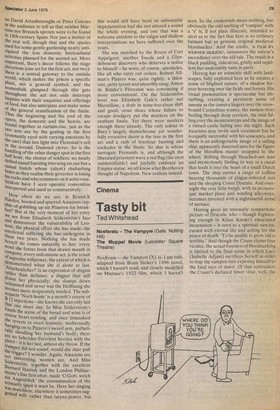 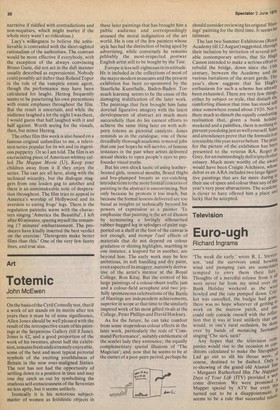 Nosferatu — The Vampyre (Gate, Notting Hill) The Muppet Movie (Leicester Square Theatre) Nosferatu — the Vampyre (X) is, I am told, adapted from Bram Stoker's 1896 novel, which I haven't read, and closely modelled on Murnau's 1922 film, which I haven't seen. So the credentials mean nothing, but obviously the odd spelling of 'vampire' with a 'y' is, if not plain illiterate, intended to alert us to the fact that here is no ordinary batman but ye genuine original medieval bloodsucker. And the credit, 'A FILM BY WERNER HERZOG', announces the auteur's ascendancy over the old tale. The result is a black pudding, ridiculous, gristly and repellent but undeniably tasty in parts. Herzog has an animistic skill with landscapes, fully exploited here as he creates a sense of blighted nature, of a shadow forever hovering over the fields and forests. His visual presentation is spectacular but disturbing, creating a persistent sense of unease as the camera lingers over the snowbound Carpathian wastes, the sunless river boiling through deep crevices, the mist falling over the mountaintops and the image of a ruined castle fading into the night. Such locations may invite such treatment but he is equally successful with his seascapes, and there is an unforgettable image of a sailing ship, apparently deserted save for the figure of the bloodless master strapped to the wheel, drifting through bleached-out seas and mysteriously finding its way to a canal that leads it into the heart of a small Dutch town. The ship carries a cargo of coffins bearing thousands of plague-infected rats and the sleeping Count Dracula. And overnight the cosy little burgh, with its picturesque market place and winding alleyways, becomes invested with a nightmarish sense of menace.

Horzog gives an unusually sympathetic picture of Dracula, who – though frightening enough in Klaus Kinski's emaciated incarnation – is seen as a spiritual outcast. cursed with eternal life and aching for the peace of death: `To be unable to grow old is terrible.' And though the Count claims four victims, the actual business of bloodsucking is limited to the final scene in which Lucy (Isabelle Adjani) sacrifices herself in order to trap the vampire into exposing himself to the fatal rays of dawn. (If that contradicts the Count's declared timor vitae. well, the narrative if riddled with contradictions and non-sequiturs, which might matter if the whole story wasn't so ridiculous.) Lucy's willingness to believe the unbelievable is contrasted with the short-sighted rationalism of the authorities. The contrast would be more effective if everybody, with the exception of the always convincing Bruno Ganz, did not act in the daft manner usually described as expressionist. Nobody could possibly act dafter than Roland Topor in the role of the vampiric estate agent, though the performance may have been calculated for laughs. Herzog frequently seems to be puncturing his own pretentions with comic emphases throughout the film. But the result is uncertain, and while the audience laughed a lot the night I was there, I would guess that half laughed with it and half against. Worth seeing for the visuals, then, but minor Herzog.

The other film this week is also based on a famous original unfamiliar to me, a television series popular for its wit and its ingenious puppetry. Or so I am told. The film is an excruciating piece of American whimsy called The Muppet Movie (U). Keep your children away from it if they enjoy the series. The cast are all here, along with the technical wizardry, but the dialogue staggers from one leaden gag to another and there is an unmistakeable note of desperation throughout. The film tries to appeal to America's worship of Hollywood and its aversion to eating frogs' legs. There is the regulation patriotic scene with the characters singing 'America the Beautiful'. I left after 80 minutes, sparing myself the remaining 17 minutes' embarrassment. The producers have kindly inserted the best verdict on the exercise: 'Detergents make better films than this.' One of the very few funny lines, and true alas.