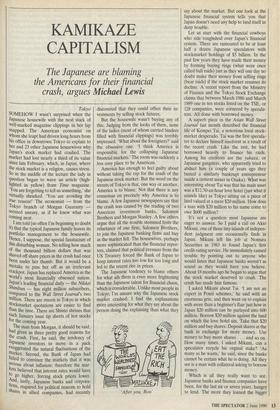 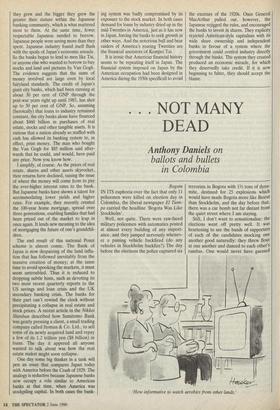 The Japanese are blaming the Americans for their financial

crash, argues Michael Lewis Tokyo SOMEHOW I wasn't surprised when the Japanese housewife with the neat stack of well-marked magazine clippings in her lap snapped. The American economist on whom she leapt had driven long hours from his office in downtown Tokyo to explain to her and 23 other Japanese housewives why Japan's stock market had crashed. The market had lost nearly a third of its value since late February, which, in Japan, where the stock market is a religion, causes stress. So in the middle of the lecture the lady in question began to wave an article (high- lighted in yellow) from Time magazine. You are forgetting to tell us something,' she virtually shrieked. 'You are avoiding the true reason!' The economist — from the Tokyo branch of Morgan Guaranty seemed uneasy, as if he knew what was coming next. I am told (so often I'm beginning to doubt it) that the typical Japanese family leaves its Portfolio management to the housewife. Hence, I suppose, the special fanatacism of this disturbing woman. No telling how much of the thousand billion dollars that was shaved off share prices in the crash had once been under her thumb. But it would be a mistake to pass her off as an irrelevant crackpot. Japan has replaced America as the world's most financially obsessed nation. Japan's leading financial daily — the Nikkei Shimbun — has eight million subscribers, Compared to the Wall Street Journal's two Ind-lion. There are streets in Tokyo in which stockmarket quotations are easier to find than the time. There are Shinto shrines that each January issue tip sheets of hot stocks for the coming year. The man from Morgan, it should be said, had given us three pretty good reasons for the crash. First, he said, the tendency of Japanese investors to move in a pack exaggerated the natural fluctuations of the market. Second, the Bank of Japan had failed to convince the markets that it was serious about inflation; therefore the mar- kets believed that interest rates would have to go higher, forcing stock prices lower. And, lastly, Japanese banks and corpora- tions, required for political reasons to hold shares in allied companies, had recently discovered that they could offset their in- vestments by selling stock futures.

But the housewife wasn't buying any of this. Judging from the looks of them, none of the ladies (most of whom carried binders filled with financial clippings) was terribly impressed. 'What about the foreigners?' said the obsessive one. think America is responsible for the collapsing Japanese financial markets.' The room was suddenly a less cosy place to be American.

America has enough to feel guilty about without taking the rap for the crash of the Japanese stock market. But the word on the streets of Tokyo is that, one way or another, America is to blame. Not that there is any consensus on precisely why America is to blame. A few Japanese newspapers say that the crash was caused by the trading of two American investment banks, Salomon Brothers and Morgan Stanley. A few others argue that all the trouble stemmed from the reluctance of one firm, Salomon Brothers, to join the Japanese banking firms and buy as the market fell. The housewives, perhaps more sophisticated than the financial repor- ters, claimed that political pressure from the US Treasury forced the Bank of Japan to keep interest rates too low for too long and led to the recent rise in prices.

The Japanese tendency to blame others for what ails them is even more frightening than the Japanese talent for financial chaos, which is considerable. Unlike most people in Tokyo, I'm unsure why the Japanese stock market crashed; I find the explanations more interesting for what they say about the person doing the explaining than what they 'After you Ron' say about the market. But one look at the Japanese financial system tells you that Japan doesn't need any help to land itself in deep trouble.

Let us start with the financial cowboys who ride roughshod over Japan's financial system. There are rumoured to be at least half a dozen Japanese speculators with stockmarket holdings of $5 billion. In the past few years they have made their money by forming buying rings (what were once called bull raids) just as they will one day no doubt make their money from selling rings (bear raids) if the stock market resumes its decline. A recent report from the Ministry of Finance and the Tokyo Stock Exchange claims that between March 1986 and March 1989 one in ten stocks listed on the TSE, or 128 companies, were cornered by specula- tors. All done with borrowed money.

A superb piece in the Asian Wall Street Journal last month described the financial life of Kempei Tai, a notorious local stock- market desperado. Tai was the first specula- tor to declare himself insolvent as a result of the recent crash. Like the rest, he had borrowed heavily to finance his raids. Among his creditors are the yakuza, or Japanese gangsters, who apparently tried to abduct him (a couple of years ago they buried a similarly bankrupt entrepreneur inside a cement mixer in Osaka). What was interesting about Tai was that his main asset was a $12.50-an-hour love hotel (just what it sounds like) in Tokyo sitting on a piece of land valued at a mere $20 million. How does a man with $20 million to his name come to owe $600 million?

It's not a question most Japanese are eager to answer. So I paid a call on Akio Mikuni, one of those tiny islands of indepen- dent judgment one occasionally finds in Japan. Mikuni left his job at Nomura Securities in 1983 to found Japan's first credit-rating service. He immediately caused trouble by pointing out to anyone who would listen that Japanese banks weren't as sound as they would have you believe. About 18 months ago he began to argue that the stock market deserved to crash. The crash has made him famous.

I asked Mikuni about Tai. 'I am not an expert in Ponzi schemes,' he said with an enormous grin, and then went on to explain with more than a beginner's flair just how in Japan $20 million can be parlayed into 600 million. Borrow $20 million against the land on which the love hotel sits. Take that $20 million and buy shares. Deposit shares at the bank in exchange for more money. Use money to buy more shares . . . and so on. How many times, I asked Mikuni, can a speculator recycle his orginal stake? 'As many as he wants,' he said, since the banks cannot be certain what he is doing. All they see is a man with collateral asking to borrow money.

Which is all they really want to see. Japanese banks and finance companies have been, for the last six or seven years, hungry to lend. The more they loaned the bigger

they grew and the bigger they grew the greater their stature within the Japanese banking community, which is what mattered most to them. At the same time, fewer respectable Japanese needed to borrow. Japanese people were saving more than they spent. Japanese industry found itself flush with the spoils of Japan's economic miracle. So the banks began to lend to men like Tai, or anyone else who wanted to borrow to buy stocks and land and pictures by Van Gogh. The evidence suggests that the sums of money involved are large even by local fairyland standards. The credit of Japan's giant city banks, which had been running at about 30 per cent of GNP through the post-war years right up until 1983, has shot up to 50 per cent of GNP. So, assuming (heroically) that loans to industry remained constant, the city banks alone have financed about $460 billion in purchases of real estate, stocks and other tangible assets. It is curious that a nation already so stuffed with cash has allowed its banking system to, in effect, print money. The man who bought the Van Gogh for $85 million said after- wards that he could, and would, have paid any price. Now you know how.

I simplify, of course. As the prices of real estate, shares and other assets skyrocket, their returns have declined, raising the issue of where the money will come from to pay the ever-higher interest rates to the bank. But Japanese banks have shown a talent for accommodating lower yields and higher rates. For example, they recently created the 100-year home mortgage, spread over three generations, enabling families that had been priced out of the market to leap in once again. It lends new meaning to the idea of mortgaging the future of one's grandchil- dren.

The end result of this national Ponzi scheme is almost comic. The Bank of Japan is now despairing of the land infla- tion that has followed inevitably from the massive creation of money; at the same time to avoid spooking the markets, it must seem untroubled. Thus it is reduced to dropping subtle hints, such as devoting its two most recent quarterly reports to the US savings and loan crisis and the UK secondary banking crisis. The banks for their part can't rewind the clock without precipitating a collapse in real estate and stock prices. A recent article in the Nikkei Shimbun described how Sumitomo Bank was gently pressing a client, a small trading company called Itoman & Co. Ltd., to sell some of its newly acquired land and repay a few of its 1.2 trillion yen ($8 billion) in loans. The day it appered all anyone wanted to talk about was how the real estate maket might soon collapse.

One day some big thinker in a tank will pen an essay that compares Japan today with America before the Crash of 1929. The analogy is seductive because Japanese banks now occupy a role similar to American banks at that time, when America was stockpiling capital. In both cases the bank-

ing system was badly compromised by its exposure to the stock market. In both cases demand for loans by industry dried up in the mid-Twenties in America, just as it has now in Japan, forcing the banks to seek growth in other ways. And the notorious bull and bear raiders of America's roaring Twenties are the financial ancestors of Kempei Tai.

It is ironic that American financial history seems to be repeating itself in Japan. The financial system imposed on Japan by the American occupation had been designed in America during the 1930s specificall to avoid the excesses of the 1920s. Once General MacArthur pulled out, however, the Japanese rejigged the rules, and encouraged the banks to invest in shares. They explicity rejected American-style capitalism with its wide share ownership and independent banks in favour of a system where the government could control industry directly through the banks. The system they created produced an economic miracle, for which they deservedly take credit. If it is now beginning to falter, they should accept the blame.