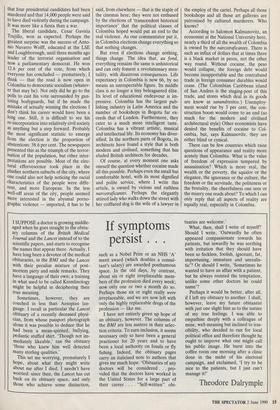 I SUPPOSE a doctor is growing middle- aged when he goes straight to the obitu- ary columns of the British Medical Journal and the Lancet instead of to the scientific papers, and starts to recognise the names that appear there. Actually, I have long been a devotee of the medical obituraries, in the BMJ and the Lancet with their peculiar mixture of post- mortem piety and snide remarks. They have a language of their own; a training in what used to be called Kremlinology might be helpful in deciphering their true meaning.

Sometimes, however, they are couched in less than Aesopian lan- guage. I recall in particular the Lancet obituary of a recently deceased physi- cian, from whose passport photograph alone it was possible to deduce that he had been a mean-spirited, bullying, pedantic stuffed shirt. 'Though not im- mediately likeable,' ran the obituary `those who knew him well detected many sterling qualities.'

This set me worrying, prematurely I hope, about what they might write about me after I died. I needn't have worried: since then, the Lancet has cut back on its obituary space, and only those who achieve some distinction, such as a Nobel Prize or an NHS 'A' merit award (which doubles a consul- tant's salary) are awarded posthumous space. In the old days, by contrast, about six or eight irreplaceable mem- bers of the profession died every week; now only one or two a month do so. Perhaps those six or eight really were irreplaceable, and we are now left with only the highly replaceable dregs of the profession — like me.

I have not entirely given up hope of an obituary, however. The columns of the BMJ are less austere in their selec- tion criteria. To earn inclusion, it seems necessary only to have been a general practioner for 20 years and to have been a local authority on fossils or fly fishing. Indeed, the obituary pages carry an italicised note to authors that gives me much hope: 'Obituaries of any doctors will be considered . . . pro- vided that the doctors have worked in the United States for a large part of their career . . . . "Self-written" obi- tuaries are welcome.'

What, then, shall I write of myself? Should I write, 'Outwardly he often appeared compassionate towards his patients, but inwardly he was seething with irritation that they should have been so feckless, foolish, ignorant, fat, importuning, immature and unrealis- tic'? Or should I write, 'Sometimes he wanted to have an affair with a patient, but he always resisted the temptation, unlike some other doctors he could name'?

Perhaps it would be better, after all, if I left my obituary to another. I shall, however, leave my future obituarist with just one slight hint as to the nature of my true feelings. I was able to empathise deeply with a colleague of mine, well-meaning but inclined to iras- cibility, who decided to run for local political office and therefore thought he ought to improve what one might call his public image. He burst into the coffee room one morning after a clinic done in the midst of his electoral campaign, and exclaimed, 'I try to be nice to the patients, but I just can't manage it!'